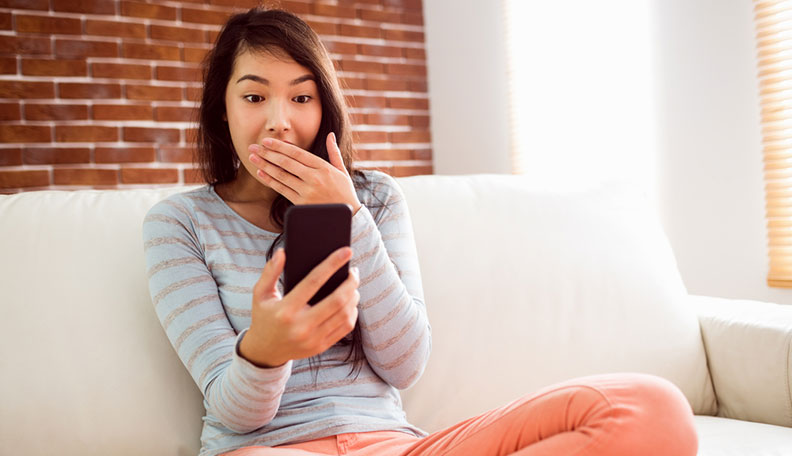 You’re merrily gossip messaging a friend and bam! You send an accidental text to the wrong person. Breathe—it’s not as bad as you think.

We’ve all done it. The accidental text. It’s the price to pay for being a sociable soul. You’re messaging more than one person at a time, but you’re having a rather gossip-laden conversation with one particular friend, perhaps about a different friend. You get yourself a little confused. Before you know it, you sent the wrong message to the wrong friend.

You press send. Your heart stops for a second. A cold chill works its way up your body. You can’t pull the message back.

[Read: How to be a good friend by following the BFF code]

What are you supposed to do now?

First, take heart that sending an accidental text to the wrong person is a common thing. You’re not the first, you certainly won’t be the last. But it doesn’t really help the fact that you’re about to have an all out friendship war on your hands.

It’s not the greatest idea to suddenly go offline and stop messaging everyone. It makes you look super-guilty and doesn’t help matters at all. The best advice is the hardest route. Own up and apologize. Who knows, actually telling your accidental text friend why you said what you said could sort out an issue that has been brewing for a while.

What if they never speak to you again. Well, that’s a possibility, for sure, but hopefully your friendship will be strong enough to be able to survive such knocks.

[Read: The bad friendship skills that push people away]

Despite that heart-stopping moment when you realized you send an accidental text to the wrong person, are there any instances in which this type of text could be beneficial?

The art of the fake accidental text

I used this method successfully not so long ago. Of course, I don’t encourage you to lie on a regular basis. This isn’t really lying, it’s more of a subtle ‘oops’ moment that causes no harm to anyone.

Let me explain how this works. Let’s assume that you are trying to get someone’s attention. For example, you are crushing on them. They’re showing a little interest but the going is rather slow. An accidental text in this case could be enough to get them wondering what you’re doing. Piquing their interest to the point where they actually start to pick up the pace a little.

This is the very situation I found myself in, sitting in my pajamas at home one night, I “accidentally” sent a text to my crush stating: “Having a great time, Kate! So sorry you couldn’t come.” Of course, that text wasn’t for Kate. I didn’t even know a Kate. I sent it to my crush and waited.

The idea was that said crush would think “Oh, what are they doing out at this time? Where are they?” And send a text back full of interest and intrigue.

Do you know what? It worked!

The reason it worked is because my crush was half invested in the idea of taking things further, but not quite there yet. The fact that I had quite blatantly shown that I was out having fun, and therefore perhaps in the company of other potential crushes, caused a ripple effect. My crush didn’t like that, they wanted to turn my attention firmly back to them.

[Read: How to get your crush to notice you and like you back]

It’s a rather sneaky way of going about things but it’s a way that often works.

It doesn’t have to be about a crush-type situation either, it can be any situation in which you want to tell someone something, or you want to get them to do something. You’re basically pushing them to do it, without you telling them to directly. You could call it reverse psychology, but I’m not sure it’s actually that complex!

In the days before technology…

The fact that we have these rather back-handed ways to get someone’s attention without actually speaking to them makes you wonder what people used to do before mobile technology and the Internet! Those poor souls had to actually go up to someone and speak to them—face to face. How terrifying!

In those days, there were no subtle ways to get someone’s attention and make them sit and message you all night, because messaging wasn’t around. The only way to show your crush that you liked them was to actually tell them, or get someone else to tell them for you. Can you imagine the embarrassment if it all went wrong?

Having said that, simpler times also have their advantages. While accidental texting is certainly a great strategy to use, it is a little sneaky if we’re honest with ourselves. We’re tricking the person we have our eye on into thinking that we’re doing something that might cause our attention to move away from them. By doing that, you cause a panic reaction which actually forces them into conversing with you. [Read: 30 wicked ways to make a guy jealous and win his attention]

Okay, you’ve got their attention, but wouldn’t it be better if they actually messaged you first because they wanted to. Not because you told them you were out living it up at a party… accidentally, of course. Whether you’re actually at a party or not really isn’t the point. I sat watching TV in my unsexiest pair of pajamas, half a bar of chocolate in one hand, and my phone in the other.

Have you been an unwitting victim?

It also makes you think whether you’ve been the unwitting victim of an accidental text in the past. Have you received a message from a friend or someone you’re into and they’ve “accidentally” let on that they’re out having a great time?

You probably have. How did that make you feel? A major case of FOMO? That’s the point of it, accidental texts are there to make someone think they’re missing out, or in danger of missing out on something or someone they want. It forces them into action.

Clever, but somewhat underhanded, I think you’ll agree. [Read: How to stop the game playing and focus on loving instead]

Recovering from an accidental text disaster

Of course, it could be that you simply made a mistake and genuinely sent a text to the wrong person. It really depends what you said in terms of how bad it is. I hope for your sake it wasn’t a cutting remark about someone that you then accidentally sent to that very person.

It happens. It’s all too easy to message anyone, whenever we like these days. Rather than picking up the phone and having an actual vocal conversation, we send a stream of messages, which actually take three times as long to type as they do to actually say!

I’m guilty of this. If someone calls me, I sometimes wait for the call to end and then message them back! Terrible, I know. I think most people find messages a more comfortable way of conversing. That doesn’t mean they’re not without risk!

[Read: The 9 golden rules to be following to be a better person everyday]

You’ve sent an accidental text to the wrong person. Now you’re left panicking about their reaction. Hold your hands up and apologize. Learn from the mistake, and don’t gossip behind their back again.

PREVIOUSHow to Seduce Your Man: 15 Hot Tips to Make It Feel Brand New Again
NEXTHow to Sexually Attract a Woman: 15 Steps to Max Your Desirability