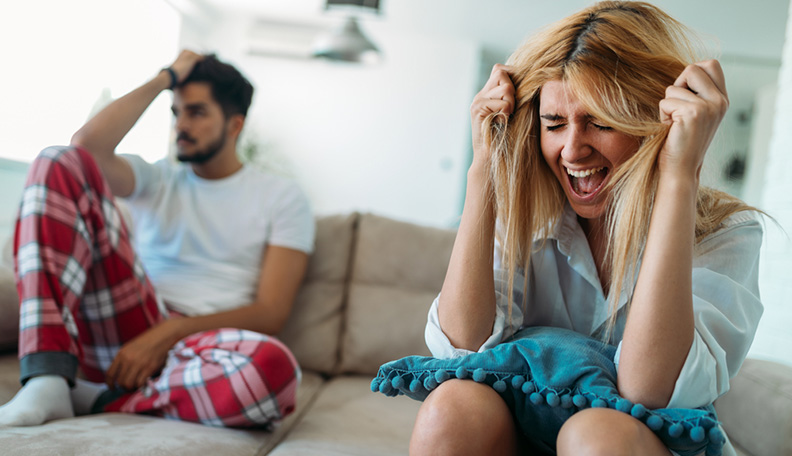 We may love watching drama unfold, but no one wants to be involved in an actual conflict. Here’s how to resolve conflict if you happen to get yourself in some drama matters.

Conflict is going to occur whether you like it or not. You can try to avoid conflict as much as you like, but sometimes you have no other choice but to be in it. And knowing how to resolve conflict is an important skill to learn in life.

Now, you’re probably thinking conflict is a bad thing, but it’s not. It’s just two *or more* opposing ideas. Does this mean there’s going to be a war? No. It just means that you don’t agree with the other person. Now, if you handle the situation correctly, you may not be able to solve it, but you’ll be able to calm down the situation and come to some compromise.

How to resolve conflict and cut the drama

In reality, most of these conflicts occur because of a lack of communication. I mean, right now, I’m pissed off. My roommate wants me out of the apartment on the weekend so his friends can come over, but, I told him a week ago that I’m having a friend from out of town come. Have I told him how I felt? No. Instead, I made some joke and went for a drink with my friend.

This could easily turn into conflict because I’m ignoring the problem. Though right now it’s not a huge conflict, it can easily blow up into something bigger. It may be awkward, but it has to be done. These steps help us learn how to resolve conflict.

#1 Take a breath. Cool down, it’s going to be okay. First and foremost, take a breath and just chill out. Arguing is stressful and you won’t be able to think properly when you’re in rage mode. So, try to get yourself to calm down and think rationally. [Read: 14 ways to overcome power struggles in a relationship]

#2 Try to see the problem in a bird’s eye view. This isn’t going to be easy, especially when you’re mad. Try to look at the situation objectively. You may not have thought you did anything wrong, but how would you feel if it happened to you?

#4 Describe the problem in the least amount of words. No one wants to hear a monologue of what happened, it’s dull. Keep your problem concise and to the point. If your partner came home drunk last night, say, “It bothers me when you come home late at night drunk.” There, you said the problem, you said how it makes you feel. Now, they have to respond.

#6 Don’t forget nonverbal communication. You may not notice it but when you stand at the door with your hand on your hip, listening to this person talk—you look like an asshole. Your body language is extremely important during conflict resolution.

Of course, you don’t want to be curled up, giving off that victim vibe, but you don’t want to look defensive. Try to maintain a natural and neutral posture without making facial expressions such as eye rolling. [Read: 23 dos and don’ts that make all the difference in a relationship argument]

#7 Don’t try to “poke” the person. We all know what makes someone we love really pissed off, but that’s not the ideal step in knowing how to resolve conflict with someone you care about. I know exactly what to say to hurt my mother or brother. But, that doesn’t solve anything. You’re not trying to get the upper hand by putting them down, you’re trying to solve the problem. Leave your punches for a boxing class.

#8 Ask questions and get answers. If you want to understand where this person is coming from, ask questions. Of course, don’t ask questions that carry this accusatory vibe. Ask simple questions such as who, what, when, where, how. See, it’s easy. That way, you get to see the complete story from their side. Notice that I didn’t tell you to ask why? Because ‘why’ usually is an accusatory question. You’re trying to resolve the conflict not start another one. [Read: Why blaming others actually makes your life so much worse]

#9 If you have many issues, focus on one at a time. Maybe you guys had a blow up after a pile of issues were thrown on top of each other. Which is exactly what happens when you don’t communicate properly. Are you now seeing the importance of communication?

So, instead of yelling at each other and pointing out all the things they did wrong, focus on one issue. Do not bring up the other issues until you solved the one you’re currently talking about.

#11 Do you both agree on certain things? At the end of the discussion, there are probably certain aspects of the situation that you two both agree on—which is great. This means there are parts of the situation that you both understand and agree on. Use those as the connecting factor between you two. [Read: 15 mature ways to grow up and behave like an adult]

#12 Make room for compromise. I know you probably want the whole situation to go your way but I’m sorry to tell you that it probably won’t—unless they’re really in the wrong. But most likely, you’re going to need to compromise.

Does your boyfriend need the car tomorrow? I know you have to go visit your family but maybe he can drop you off instead. Is this an ideal situation for you, probably not, but you have to compromise.

#13 Try to make a plan together to fix the problem. So, you talked about how you feel, they talked about how they feel. If you want to know how to resolve conflict, it’s time to figure out how you’re going to solve the problem. Is there something that you need to do? Maybe you’re tired of always being the one to clean the house, but when you tell them to do it, you go ahead and clean anyway. Instead, stick to your word. There’s always a solution to a conflict.

#14 Don’t use passive behavior. Sometimes, I can’t help but be passive aggressive. I slam my door, I reply to that person like an asshole. Of course, I’m not doing the situation any good. But really, passive people don’t actually solve any problems, they just add more fuel to the fire.

So, work on communicating in a direct way. Let this person know how you feel by saying, “I feel” not “you’re a dumbass.” [Read: How to stop being passive aggressive]

#15 Move on. Listen, you might have more conflicts in the future, maybe not with this person, but it’ll be with someone else. You must learn to let things go. You sat down with this person, you talked about your feelings, you guys even came to an agreement. Now what? There’s nothing to hold a grudge against, you solved the problem. It’s over, move forward.

[Read: How to fight fair in a relationship and grow closer]

Wouldn’t you rather be out of conflict than in it? Well, the only way to get that done is learn how to resolve conflict. So, it’s time to step up before it turns into a living nightmare.