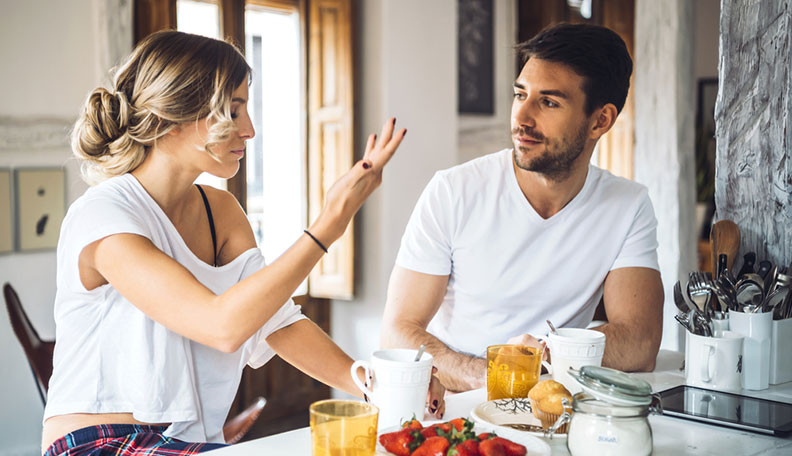 Dating is tough enough, even when both people are in it equally. But when these signs of a controlling person pop up, it only gets worse.

A controlling person will always show the signs of a controlling person no matter how hard they try to hide it behind a veil of concern and nicety. But then again, controlling people are pretty good at covering their tracks. The way they get away with their behavior for so long is a knack for manipulation, which of course is another form of control.

No one person should control another, especially in a relationship. So keeping an eye out for these signs of a controlling person can ensure you are in a healthy and happy relationship.

Should you give them the benefit of the doubt?

No. Controlling is unacceptable. Being needy or a little jealous is something that can be improved with time, but if someone wants power of you and what you do or who you see, it is time to cut ties.

But sometimes you can’t see just how controlling someone is. Often, someone dealing with a controlling person is wearing rose-colored glasses or become so accustomed to being controlled they don’t even realize it. [Read: 18 signs you’re being coerced into a controlling relationship]

If you aren’t sure whether or not your significant other is really controlling or not, reach out for advice. Ask those closest to you what they think. And ask them not to sugarcoat it. Your friends know what you complain about and how happy you are. Trust them to tell you what you need to hear.

You may be blinded by love, but good friends and family will let you know the truth. If you are always worried, concerned, or stressed about your relationship, there is a good chance you just don’t realize you’re with a controlling person.

So, what are the signs of a controlling person?

The signs of a controlling person can be major or so subtle you would miss them unless looking for them. Hopefully, these signs help you keep your eyes open to the reality of your partner’s behavior.

If they question your actions or need you to change your behavior for them to trust you, it is them being controlling, not you being suspicious. [Read: Should a relationship without trust last?]

People who control will not be able to stand it if they think they are being controlled. Even if you simply ask them a question, they may take it as an attack. [Read: Emotional maturity: 13 clues to know if someone has it]

#3 They play the guilt card. Guilting you into things is the golden rule of a controlling person. They use their “love” as fish hook to reel you in. If you question them they will get upset and guilt you into apologizing.

If you tell them you can’t make it to a date, they seem okay, but guilt you into cancelling something else to be with them. Using guilt to control you is something that works because it makes you feel like you did something wrong. And you don’t blame them for their behavior. Instead, you question your own. [Read: How to handle the guilt trippers in your life]

#4 They have no limits. Someone controlling has no limits. A normal relationship might include fighting, but when times get tough you’re there for each other. In a controlling relationship when you go through something, rather than making it easier on you, they make it harder.

Whether requiring check-ins from you when you’re super busy, or starting a fight when you need their support more than ever, a controlling person will be controlling all the time, even in your hardest moments. [Read: 16 subtle signs a narcissist is trying to control and abuse you]

#5 Manipulation. Control and manipulation go hand in hand. Only manipulation is a more subtle version. It uses reverse psychology to make you think you’re making your own choices, when really they manipulate you.

Through guilt, anger, fear, no matter what they will convince you to do what they want.

Their controlling you won’t stop until you leave the relationship all together. [Read: How to recognize a toxic relationship so you can get out early]

#7 They want your social media and phone password. This is a modern version of a controlling behavior. If someone wants access to your personal social channels or your phone, that is a major red flag.

Even if you have nothing to hide, when someone trusts you, there is no need for such a massive invasion of privacy. Within a healthy relationship their are boundaries and independence. In a controlling one, there will be a dysfunction with everything.

#8 You get nervous to tell them things. When someone is controlling, anything abrupt might set them off. You not only want to avoid a fight, but also don’t need to give them another reason to want to control you even further.

So if you got a promotion, a job offer far away, or even got invited to an event and you are worried rather than excited to tell this person, they are controlling you.

And if their control escalates to physical abuse call the National Domestic Violence Abuse Hotline at 1-800-799-7233. [Read: The big signs of emotional abuse you may be overlooking]

#10 You know you need to get out but are afraid what they might do. Someone can suffocate in a controlling relationship for a long time, even years without knowing it. They blame themselves or even become numb to the abuse.

But if it comes to the point that you know you want to leave but are scared to, it is because they control you.

Whether you are scared leaving might be dangerous or they may retaliate against you, it is best to get someone else involved. Whether that be the police, a trustworthy friend or family member, or a hotline, your safety and happiness are the number one priority. And you won’t have either until you are free from this controlling person.

[Read: The 14 common traits you must understand about controlling people]

If your partner is exhibiting any of these signs of a controlling person, your best bet is to get out as soon as possible. Waiting it out does not work. Hoping they’ll change won’t work.