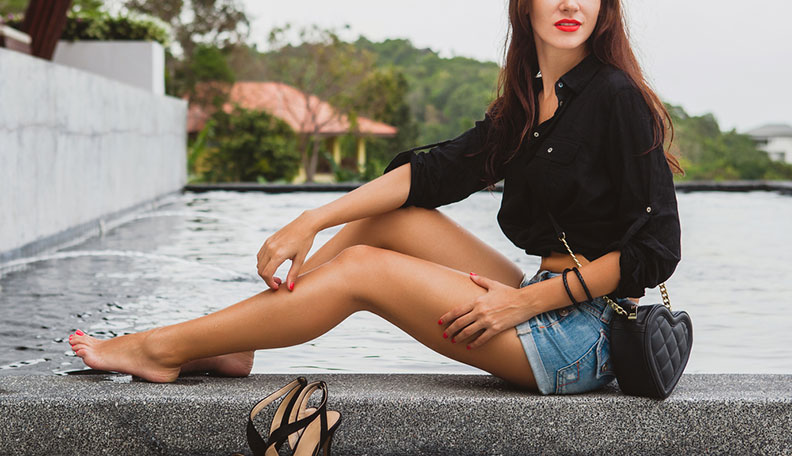 Stop only fantasizing about life with the man you like. If you want to get the guy of your dreams, make your feminine wiles work for you.

Some girls have a knack for seducing guys using their feminine wiles while others aren’t even aware they exist. Feminine wiles are the inherent sexual energy all women possess. If you think  you don’t have them, you are oh-so-wrong. Hidden within every girl is the ability to seduce a guy and make him yours. You just have to know how to harvest your sensuality and make it work for you.

15 ways to make your feminine wiles work for you

What are feminine wiles? They are the things about women that make us soft, sensual, and desirable. Built into our genetics, we all have them. Some women just haven’t learned to use them properly. Trust me, if you call your inner vixen to the surface, you possess all the mojo necessary to use your feminine wiles to capture the man of your dreams.

#1 Use your soft touch. When you seduce a man with your feminine wiles, you touch lightly and sensually. That means brushing up against him, lightly touching his shoulder or knee, or slowly and gently moving in to be close. The more unthreatening you make your movements and touch, the better. [Read: How to seduce any man who isn’t yours and leave him smitten]

#2 Be highly empathetic. To use your feminine wiles, be highly empathetic to his feelings and moods. That not only means feeling for him but expressing unconditional love and acceptance for him in every way. Talk to him like you understand his innermost feelings, even if he can’t express them. The key is to make him feel like you “get” him.

#3 Be nurturing. Inside of every man, there is a deep admiration and love for his mother. An innate feeling, part of using your feminine wiles isn’t about “mothering him” but about being the nurturing side his mother showed him when he was young. Brushing the hair from his eyes, giving him a back rub, or making soup when he isn’t feeling well, are all ways to use your feminine wiles to lure him in and keep him close. [Read: How to seduce a man and bewitch him with your words]

#4 Smell good. At the heart of femininity is the way a woman smells. Pheromones are real. And they are everything to lust and desire. Make sure that you aren’t the girl that comes from the gym, sweaty and smelling like a locker room. Be the woman who smells like seduction to get any guy, at a minimum, to look her way.

#5 Walk elegantly. A woman using her feminine wiles doesn’t walk on the heels of her feet, she gently floats around. To catch a guy, exude femininity, by walking like you float on air. Make every movement you make flowing and sensual.

#6 Be sultry. How do you show your sultry side? Show your naughty side. That means wearing red, high heels with spikes, and other things that signal to him that you know how to make him feel good in bed. A woman who looks like she knows how to be a little naughty peaks any guy’s imagination and interest. [Read: 15 secrets to learn how to be seductive]

#7 Use your assets. Use the gifts that God gave you. If you have a Brazilian butt, show it off with some tight pants. If you are well-endowed, wear a low-cut and revealing shirt. The key is not to give too much, but just enough to leave him dreaming of what you look like without clothes for when he wins you over.

#8 Speak with your eyes. Eye contact is one of the most important parts of using your feminine wiles. When a man speaks to you, never take your gaze from his. A woman who looks a man in the eyes while he speaks makes him feel vulnerable. Almost like looking into the sun, when you stare into his gaze, it is like your heart speaks to his telepathically. [Read: Prolonged eye contact – What it means and how to do it]

#9 Wear girly-girl stuff. Even if you are more the low-rider jean type, if you want to win a guy, mix it up and be just a little out of character sometimes. A lot of frills, lace, and fishnet stockings might not be your thing, but they certainly are the things that grab his attention and make him see you in a whole new light.

#9 Paint your nails bright red. Painted red nails are a very sensual sign to a guy. There is something about a woman who takes good care of herself, including her nails, which turns a guy on. Bright red lets him know that you are red hot in bed.

#10 Use your pouty lip. The pouty lip look is key to using your feminine wiles. Pursed, plump lips that flash with a glossy appearance, gets any guy dreaming about where those lips will go next. [Read: Lip biting and the scientific reasons why it’s so sexy]

#11 Speak softly. Even if you tend to be louder, when using your feminine wiles, tone it down a bit and speak with a softer tone. Almost like perpetually whispering in his ear, when you lower your voice and make it breathier, it’s almost like sounds you make when you are all alone, just the two of you, in bed.

#12 Appear pleased. Men like to feel as if they can impress the women around them. If you want to show a guy your feminine wiles, make sure that you always look pleased when around him. There is nothing less feminine wile-ly than the resting bitch face. Even if you aren’t highly entertained all the time, don’t let him know that.

#13 Be mysterious. A woman who keeps herself to herself is a highly attractive thing. Guys like a girl with a little mystery about her. To catch the guy of your dreams, don’t over talk, give too much information, or tell him what you think. Too often, especially when nervous, girls give too much information right up front, which leaves a guy not guessing about anything.

#14 Be lady-like. No swearing or sitting spread eagle. To make an impression and show that you are all female, make sure to use your manners. Be sophisticated, and leave the sailor’s talk for the sailors. [Read: How to be a lady who awes her man and everyone else]

#15 Be dainty. Don’t do too much of anything. If you want to show your feminine wiles, sip your drink, take small bites, and be highly reserved about anything excessive. To seduce him, show restraint. It is the dichotomy of naughty versus nice. It shows him that you can be the girl next door or the freak in the bed, both of which men highly desire.

Feminine wiles are the things that make women, women. We all have them, but that doesn’t mean that we all know how to use them to our advantage.

[Read: How to get guys to like you without compromising who you are]

So, if you want to land the guy of your dreams, just use your feminine wiles. Speak softly, be seductive, and don’t give too much of yourself by wearing too little or talking too much. Just be the most feminine you possible.