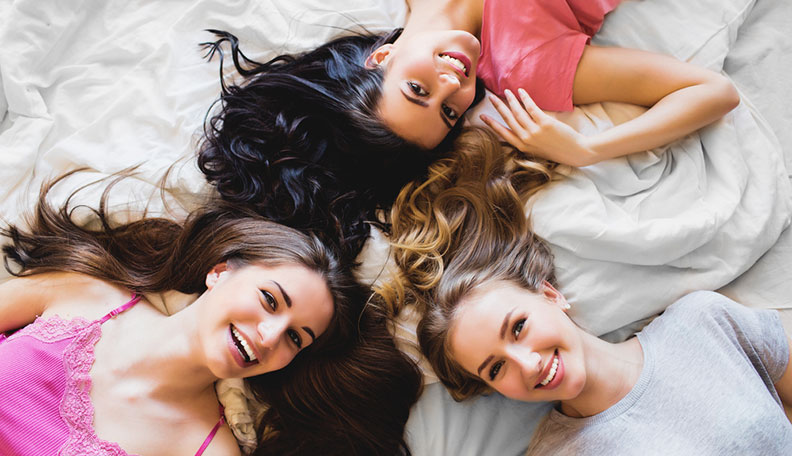 You’ve suddenly developed a friend crush. What does this mean? Are you attracted to them? Don’t panic! It’s simply a case of admiration gone awry.

We’ve all had someone come into our lives who takes our breath away. This isn’t necessarily romantic, more like a friend crush, but it can be someone you see, admire, and wish you could be more like.

At the time, the feeling can be overwhelming. You might want to spend all your time with this person and subconsciously try to be more like them. If you’re friends already, you’ll probably want to be their bestie.

Don’t panic, you’re not going crazy. It doesn’t mean you’ve suddenly developed a romantic or sexual attraction. You simply have a friend crush. [Read: What it means when you have a platonic crush]

What is a friend crush?

A friend crush isn’t something with any romantic or sexual connotation, it’s purely platonic. It’s actually very sweet. You meet someone out of the blue, or it’s someone you’ve known for a while, but you’ve suddenly started spending more time with them.

A friend crush means nothing adverse, but what it does mean is that you should do a little soul searching into why you find this person so alluring on a platonic basis, and try and figure out what you think you’re lacking. The fact is you’re lacking nothing, but perhaps you simply think you are.

Confused? Let me give you a personal example. [Read: Questions to ask your BFF to help you bond]

An example of how a friend crush can look

I consider myself to be a normal kind of girl. A friendly, happy go lucky, nice girl. I don’t have any particular hang ups, although I was shy as a child, but nothing other than that. This particular day, a friend of mine asked if she could bring her new work colleague to our pre-arranged drinks that evening. I said okay, I had no problems with it. When I met this work colleague of my friend, I was blown away.

For no other reason than I simply wanted to be her, I quickly developed a new friend crush.

Seriously, at my age.

There was something about this girl that I couldn’t quite put my finger on. She seemed able to disarm everyone she came into contact, be it with a quick witted remark or a smile. She was a people person. Someone so unbelievably at ease in any social situation. That struck deep with me, probably because of my childhood shyness. I wished for such natural social ease.

I could have hated her. She was the most people person in the room the moment she walked into it. I could have been jealous, but I wasn’t. Instead, I befriended her because I liked her. She became a regular at our catch up drinks from that point on, until she moved back to Australia a few months later.

My friend crush was blown the moment she left, but I am glad that I met her. She taught me that it doesn’t matter if you’re feeling a little shy or not so confident, you can easily fake it and simply not care what anyone else thinks of you.

As you can see, friend crushes come into our lives to teach us something even the smallest thing in the world. [Read: Why it’s important for every girl to have a straight girl crush]

Learning from your friend crush

Now, I should point out that I don’t advocate attempting to become someone else. Be happy with who you are and love yourself for the wonderful being that you are. However, when you develop a friend crush because of a trait that the other person shows, it usually means that you feel you’re lacking something.

You might find that your friend crush fizzles out just as quickly as it began, or it might be an ongoing thing. However long it lasts, see it as an opportunity to learn. [Read: How to learn all of yourself–even the parts you hate]

What is causing your friend crush?

Are you crushing because of a visual reason or a personality-based reason? Do you think you’re lacking in that department? Or, you’re seeing something that you wish you had too? If you wish you had it, why?

This might sound a little deep and meaningful, but it’s a really good learning exercise to be had here. We all admire things about other people, such as Beyonce’s hair, or J-Lo’s butt, but we stop short of developing a full blown crush on these people because we realize that they’re just physical attributes of someone that we admire. Incidentally, I have a full blown girl crush on Beyonce, simply because she is amazing, but that’s by the by!

What I’m trying to explain is that developing a friend crush because of one single physical attribute, e.g. hair, body shape, eye color, isn’t likely to last for long. The novelty will wear off. On the other hand, a friend crush based on a personality trait is likely to last longer. You see something in that person that you wish you had, something you really admire.

Remember, we’re all different, and you’re no less valuable or admirable than they are. How do you know they’re not friend crushing on you? You don’t! You could have a number of people who developed friend crushes on you, and you have no clue! That’s a thought to keep with you. [Read: How to build self-confidence – 16 ways to realize you’re worth it]

Stay true to yourself

It’s fine to have a friend crush, it’s part and parcel of normal life, but it’s not normal to try and change elements of yourself to morph into that person. Firstly, your friend crush will notice and find it a little creepy, and secondly, it’s very detrimental to your own self confidence if you feel that you’re not enough as you are. Of course you are enough!

You’re a lion or a lioness and you should feel that every single day of your life! Sure, admire someone else, but admiration should stop at the line before emulation.

Before my friend crush moved back to Australia, we had a deep conversation. I really thought she had it all figured out, she seemed effortless in any situation. She confided in me that she suffered with anxiety, and she used bluster and fake confidence to overcome it. That struck deep with me, and taught me a lot.

As you can see, everyone has their own life with their own stuff going on, and while you can admire someone for a trait, be it visual or personality, focus on being yourself and dealing with your own stuff.

[Read: 32 crazy fun things to do with your friends]

Superficially, a friend crush is the ultimate compliment in so many ways. Tell them what you love about them, but hold back on the emotion, otherwise you run the risk of crossing the line from admiration to downright weird!

PREVIOUSHow to Feel Better after a Breakup: 15 Steps to Find Your Happiness
NEXT11 Rules for Getting Back Together with an Ex & Protect Your Heart