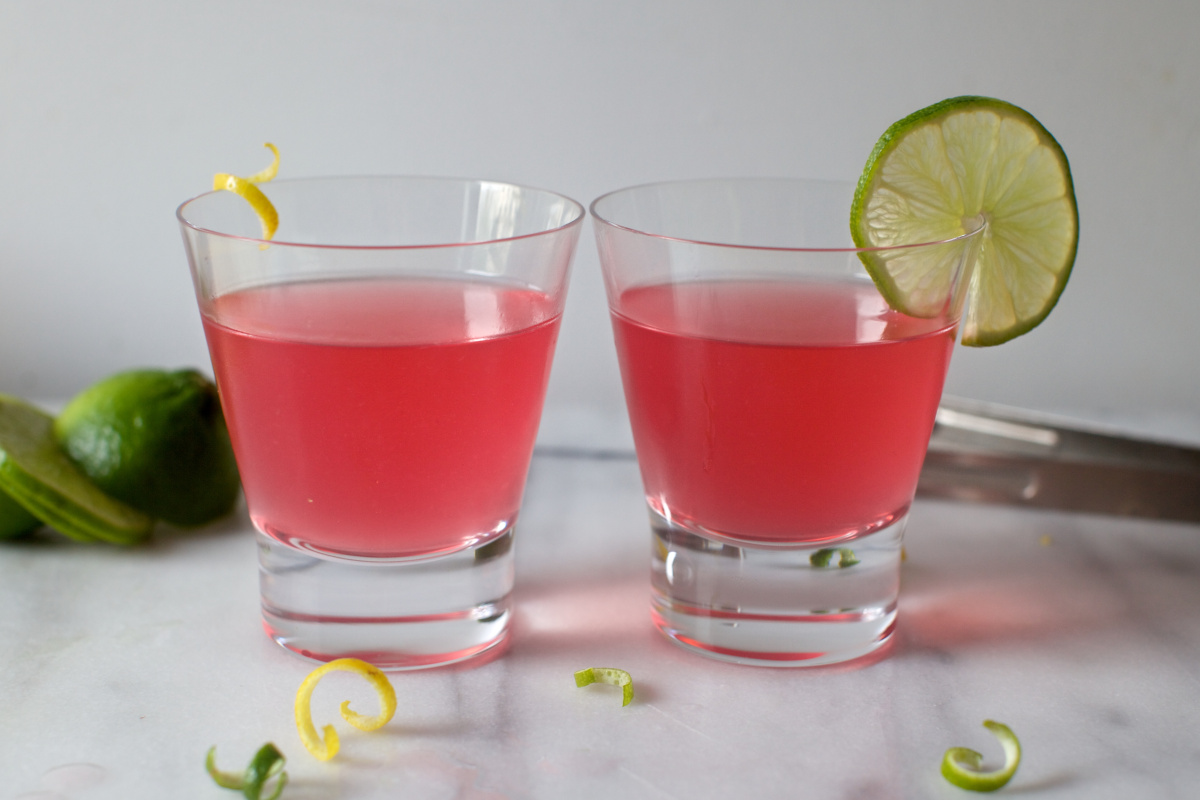 Did you learn how to cook anything new this year? Anna Hezel, senior editor at Taste (one of my favorite breakout food publications of the last couple years) asked this on Twitter last week and like a Muppet to the ABCs, I couldn’t resist jumping in. I’m glad I did. I always wish I had more time to cook all the things I want to cook (my To Cook list is still thousands deep), wish I could share more recipes more often here, but this caused me to look back at the new recipes here in 2018 and feel a murmur of pride. Look at all we did! I learned to make falafel, and that it’s shockingly easy! I got to make Pad Thai I crave the most at home. We got cacio e pepe just about foolproof at home, just when I was convinced I never would. I learned about melting potatoes. We made the sheet pan sandwiches of my dreams and they’re vegan too. We had a real talk about the InstantPot and got some delicious short ribs out of it. I learned to make the best apple pie I’ve ever had. I made a completely bonkers layered mocha cheesecake late in the day on my husband’s birthday, and last week we mashed up baklava and babka, just because we could. I look at all of this and I am so excited about the year we’ve had, many of these things I had barely dreamed up yet this time last year, and I hope next year is even better.

And now, a brief moment of sap: Getting to hang out here, indulging my culinary whims, and having a cheering and encouragement squad had been one of great surprises and delights of my so-called adult life. Who knew what I’d do when I grew up? Certainly not me. I bumbled along, I tried things I hated, I tried things I didn’t hate but felt no passion for, and one day I landed here and, to my surprise, am rarely asked to leave. I am so thankful you are here and since I am not tired of cooking, I hope you never get tired of reading.

So tell me: Did you learn how to cook anything new this year?

Meanwhile, here are your Smitten Kitchen favorites from this year: 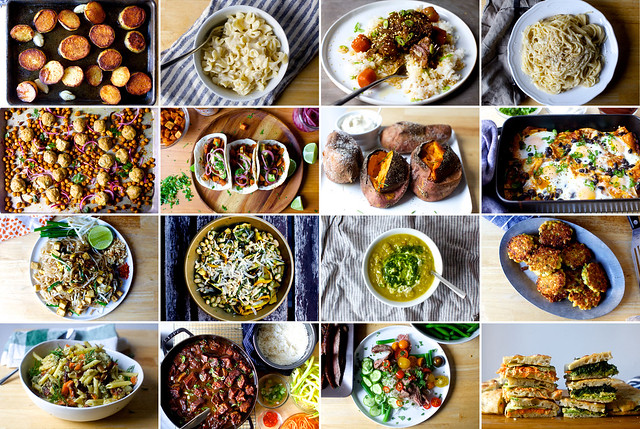 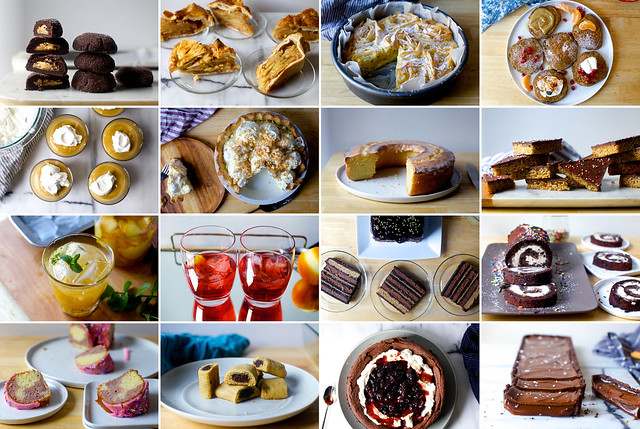 A funny thing happened this year. I pull these Best Of collections most (er, some) years [here’s 2017 in two parts, 2016, 2015, and 2014 if you’re curious.] and sort them into sweet and savory, but what usually happens is that the sweet recipes really outrank the savory ones. I get it: chocolate > soup. The world, or at least my world, needs both, even if I know asparagus tartines will never elicit the popular fervor of peanut butter cup cookies. But this year, something flipped, and the savory recipes took a bit of a lead on the sweet ones. Are we cooking dinner more, or trying to? Is the explosion of great bakeries in each city so wonderful we don’t need to make cookies and pie at home anymore? I will be mulling this over while enjoying a year-end cocktail if you don’t mind….

I vowed that 2018 was going to be the year that the cocktail dream of the late 90s/early-aughts, The Cosmopolitan, would get its due. Well, there’s always 2019, right? While it existed before the martini-and-things-served-in-martini-glasses-that-make-martini-enthusiasts-shudder craze of the early 2000s — it’s a descendant of the Daisy, the Cape Codder, and more — the arrival of Absolut Citron (remember all those sleek Absolut ads?) led to Toby Cecchini putting it on the menu at The Odeon (a place to see and be seen downtown) where it got Madonna’s seal of approval and later a pop culture nudge from Sex and the City that landed it, well, everywhere. Which means a backlash was shortly on its heels — we’re rather fickle, aren’t we? — and that brings us up to today, where despite the fact that many credit the Cosmopolitan with the launch of the craft cocktail movement, the prospect of a Cosmopolitan still elicits groans from anyone old enough to remember when you couldn’t escape them. 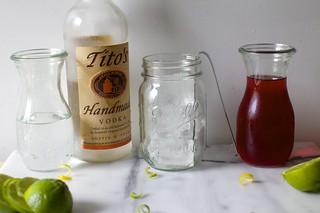 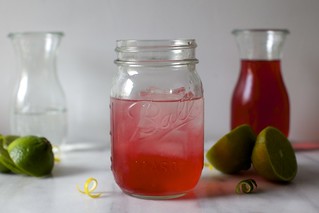 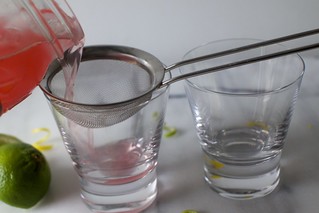 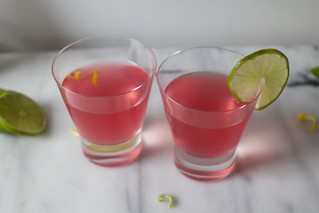 But not me. I think it’s because the very first one I had, at a long-since-closed bar on West 14th Street, probably within days of arriving in NYC, was absolutely perfect — dry, not too sweet, with a clear suggestion of lime — despite the fact that not once since has been, I remember it as a good drink. The Cosmo (we’re on a casual name basis, you see) is distantly a sour cocktail, where the citrus is replaced by cranberry juice. While the good cranberry juices are very tart, it’s hard to find ones that are just cranberries these days and not blends of other juices and flavors. (I made do with what I could get in these photos.) But in the year 2018, pomegranate juice is more tart and easier to find; I highly recommend using it here instead. I use unflavored vodka, because I’ve already lived through the 1990s, but I never skimp on the fresh lime juice, because that’s the way I like them best. 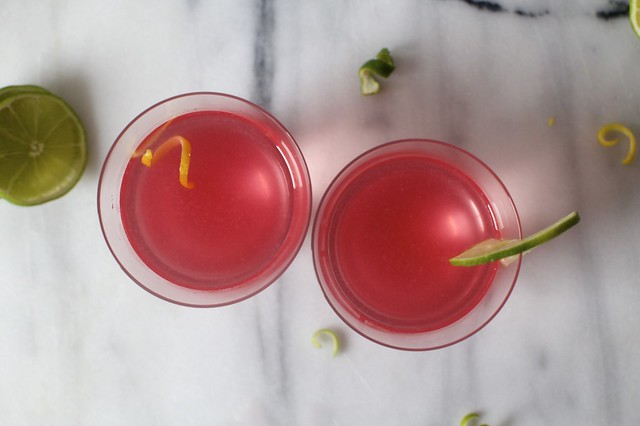 Cheers to you! I hope you get lots of rest in these last few days of the year and lots of cheer. See you in 2019, armed and armored with soup.

And for the other side of the world:
Six Months Ago: Grilled Zucchini Ribbons with Pesto and White Beans
1.5 Years Ago: Best Hot Fudge Sauce and Grilled Pizza
2.5 Years Ago: Funnel Cake
3.5 Years Ago: Herbed Summer Squash Pasta Bake and Chocolate Chunk Granola Bars
4.5 Years Ago: Limonada de Coco/Frozen Coconut Limeade and Cherry Almond Dutch Baby

The original recipe calls for cranberry juice cocktail (i.e. it will have other fruit flavors) but I prefer the pure stuff if you can get it, or use pomegranate juice, which is wonderful here. Adjust everything to taste, of course: more juice for mildness, more liqueur for sweetness. If your martini glasses are large, you might to scale this recipe up to fill them.
Chill your glasses — you can use coupe, martini or other cocktail glasses here — in the freezer until needed.

Place drink ingredients and ice in a cocktail shaker (or, if you’re Deb and can’t find yours, a large jar with a lid will do) and shake until everything is cold. Strain into chilled glasses. Garnish with lime or lemon peel, if you wish.