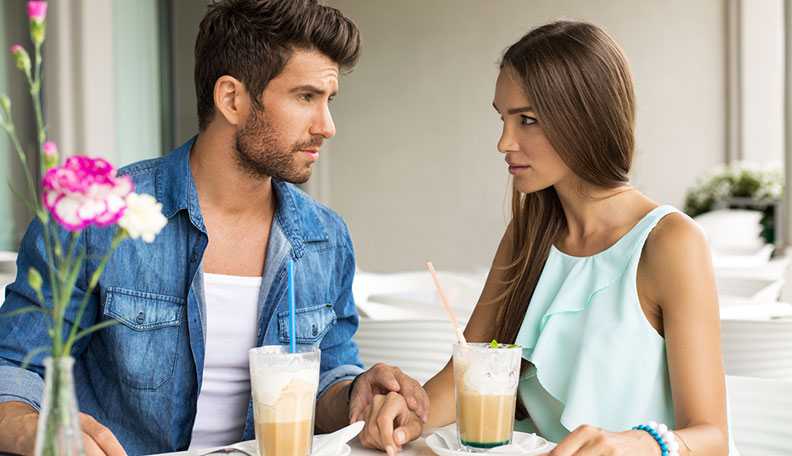 Love is an amazing feeling, but not when you have a manipulative partner. But how do you recognize the signs of an emotionally manipulative boyfriend?

Maybe you’re thinking an emotionally manipulative boyfriend will never happen to you… don’t be so sure of yourself. I said that to myself. Please learn the signs of emotional manipulation now. That way, once you spot them out, you sit down with yourself and figure out the next step.

How to tell you have an emotionally manipulative boyfriend

When I was eighteen, I met my first serious boyfriend. I was head over heels in love with him. I didn’t notice the time pass. I was obsessed with him, and he was obsessed with me. Sounds like every girl’s dream, right? In the beginning, it was a dream.

But after the obsession faded away, I saw who he really was. Aside from his drinking, he made me feel horrible about myself. If I cut my hair, he called me a slut. If I talked to a guy who wasn’t him, he called me a cheater. Sure, I argued with him and defended myself. After a while, you get tired, and you stop trying. So, I agreed with him, just for him to be quiet. I didn’t realize he was emotionally manipulating me until the end of our relationship.

[Read: 15 subtle signs of a controlling and manipulative boyfriend most girls don’t notice]

And it was a four-year relationship—so it took me a while. It’s hard coming to terms with what someone you love is doing to you. I didn’t want to accept it, I ignored it, but that can’t work in the long-run. We eventually broke up, but it left a huge scar. I didn’t trust men, nor could I commit to anyone.

I don’t want this to happen to you. Please, know the signs of an emotionally manipulative boyfriend. Then, get out while you can.

#1 You feel something is off. When you spend time together, you don’t feel good about yourself. You’re always watching what you say, and it’s like you’re walking on eggshells. And that’s because he either scolds you or makes you feel guilty about everything. Well, that is called emotional manipulation. [Read: Early warning signs of a possessive man you never want to overlook]

#2 You doubt yourself. Listen, if anyone can make you doubt your own thoughts and feelings, he’s mindfucked you pretty well. You know who you are, what you like, what you dislike, but he’s trying to play around with your feelings. He points out your weaknesses, making you look to him for any advice. In other words, he does your thinking for you.

#3 You want what he wants. Even when you want something entirely different, he works his magic and tries to get you to believe you want the same things as him. Of course, it’s normal in a relationship for two people to blend their lives together. But, when you put your needs and wants to the side, only catering to his needs, that’s where things go wrong. [Read: How to handle controlling behavior in a relationship and turn it around]

#4 You’re responsible for his feelings. When he’s feeling sad, angry, or stressed, you’re the reason why. If he had a bad day at work, that’s because of you. If he’s angry he got a parking ticket, well, that’s because you distracted him when you called. You’re the reason for all of his negative feelings. He doesn’t have to control them; instead, he points the finger at you.

#6 He plays the victim. It’s normal for couples to get into arguments from time to time. But what’s not normal is for him to play the victim. If you find yourself always being blamed for everything and having to apologize, something is wrong. He’s not taking responsibility for his actions; rather, putting everything on you. [Read: 16 abusive relationship signs of a devious lover]

#7 You’re playing in his court. In other words, anything he does with you is in places where he feels most comfortable. You aren’t traveling together to new destinations or trying out new things. He only does things with you that allows him to gain control. He chooses how you spend your time together and where you go.

#8 You feel like you’re overreacting. But you’re not. While he’s playing the cool and collected card, you’re showing genuine emotion. He’ll tell you that you’re overreacting, making you feel like you can’t trust yourself. He says you’re being dramatic or have mental health problems. But your emotions are perfectly fine. He’s trying to control them.

#9 He emotionally blackmails you. Maybe you planned on going out with your friends tonight, but he’s suddenly not feeling well, and has asked you to stay home or else he’ll die. It can even be more dramatic, where he threatens self-harm or suicide. Unfortunately, these are all ways to control you. Being with someone who uses self-harm as a way to keep you around isn’t a partner. [Read: 18 signs you’re being coerced into a controlling relationship]

#10 He “intellectually” bullies you. A manipulator, a good one, isn’t going to come ill-prepared. No way. If anything, intellectually he’s going to hit you with facts and statistics to make his point seem stronger. Since you don’t know those facts, he’s showing his power over you, making him look more intelligent and reliable.

#11 He gaslights you. Now, this is a really messed up form of an emotionally sick game of an emotionally manipulative boyfriend. Gaslighting is when someone does shady things behind your back, but will then make up lies, leave information out, and make you believe you forgot what actually happened.

In other words, he’s trying to make you go literally insane. You feel like you can’t trust yourself anymore, and that your partner should be the one in control. [Read: 16 signs your lover is clearly gaslighting you]

#12 Everything is a joke. Whatever he says, whether it’s hurtful or offensive, it’s always just a joke. He doesn’t think what he says is upsetting or hurtful; it was just a joke. However, if you say something similar to him, you’re extremely hurtful and must apologize. He doesn’t want to take responsibility for his words because if he did, it means he knows he’s putting you down.

#14 The silent treatment. God, I feel like we’re ten-years-old. This is such a basic, yet effective way to emotionally manipulate people. If you disagree or do something against his wishes, he’ll give you the silent treatment. He won’t return your calls or texts. He’ll make you wait endlessly until you start freaking out, thinking you did something wrong. Eventually, after you beg him, he’ll accept your apology because he won.

#15 He’s all about ultimatums. Your life with him is a giant ultimatum. There’s no discussion or conversations when you need to make a decision. Instead, he gives you an ultimatum. “If you don’t come with me, I’m breaking up with you.” So, what do you do? You end up doing what he says to keep the relationship together. Whether it’s a bluff or not, it’s manipulation. [Read: The early warning signs that scream he’s a bad boyfriend]

#16 He always has it worse. Maybe you just lost your job, but he had a hard day at work, so you need to comfort him instead of worrying about yourself. When it comes to manipulators, you can never have a worse or better day than him. He needs to be in the center of the spotlight at all times.

[Read: Devious signs of manipulative behavior you should never ignore]

After reading the signs of an emotionally manipulative boyfriend, what do you think?  If he is one, seriously consider whether he’s someone you want to be with.

PREVIOUSMy Boyfriend Likes Other Girls’ Pictures on Instagram: What to Do?
NEXTHow to Know if Someone Likes You Back: 15 Subtle Signs People Miss