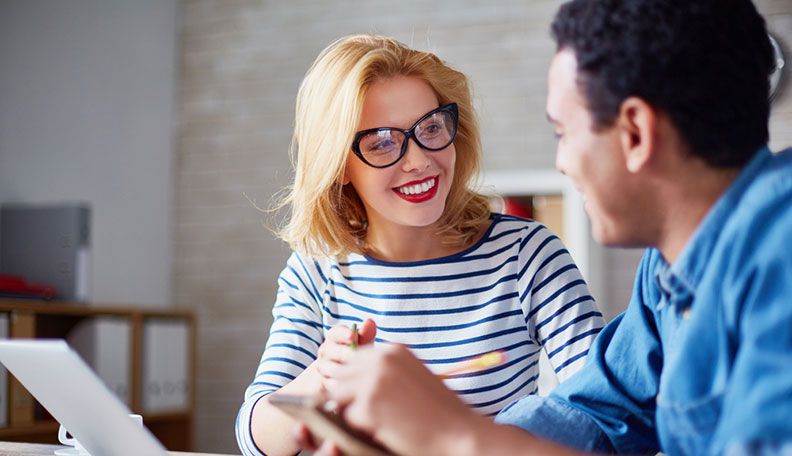 New crush at work? The only thing on your mind is whether or not the feeling is mutual. Let’s learn the signs a coworker is sexually attracted to you.

Work crushes are great. They help you get through the daily grind just knowing they exist. They give you a reason to get dressed in the morning, possibly even wash your hair. Learning the signs a coworker is sexually attracted to you may not be in your HR manual, but you should learn them.

When I worked with male colleagues, I had a blast. Mind you, I’m a huge flirt, so wherever I work, I make sure to keep myself entertained. But, aside from that, having a crush on your coworker is a lot of fun. The drama of the small interactions makes work easier to pass.

That being said, eventually, something needs to happen. You can’t simply have a crush on someone for years and not have some conclusion to the story. So, if you’re into taking it to the next step, you first see whether they’re attracted to you. Of course, you could just ask them out and see their response, but what’s the fun in that?

[Read: Does your crush like you back? 15 things you should do next]

So, it’s time to see the signs a coworker is sexually attracted to you. From there, you’ll be able to decide whether or not you’ll want to make a move *even though you should regardless of the signs*. Anyways, let’s get this thing going! Because it looks like someone has a crush!

#1 You feel it. Yes, this is the most important sign. Maybe because you like them, your instinct isn’t in tune, but usually, you can tell when someone is sexually attracted to you.

It’s the overall energy, the way they look at you. You can feel it throughout your body. If you have that feeling, you’re completely right *but still read the other signs*. [Read: 15 obvious signs of flirting between a guy and a girl]

#2 You feel comfortable being touchy with them. When we like someone, we’re touching them, laughing, making small flirtatious moves. And if the response is reciprocating, then great, it’s a good sign you have good sexual chemistry. But, if you double think every time you touch their arm or sit close to them, then something is off. If it’s not happening naturally, you don’t have the right sexual attraction. [Read: What does sexual attraction feel like?]

#3 It’s all in the body. Your colleagues are no different from the billions of other people on this earth. Everything you need to know is in their body language. If they sit super close to you, staring at you from their desk or always facing you, it’s clear they’re attracted to you.

#5 Your conversations flow. Sexual attraction is more than just eye contact. It also involves the way you communicate. If you’re at work and you find yourself talking about non-work related things for hours on end, you are attracted to each other to some level. Sexual and non-sexual chemistry go together like two peas in a pod. [Read: How to handle a coworker crush like an adult]

#6 The eye contact isn’t weird. When you look at each other, it doesn’t make you feel uncomfortable. Instead, you want to jump on them and rip their clothes off, but slow it down. When you hold eye contact, it’s a clear sign of sexual chemistry. But if you’re feeling creeper vibes, well, then clearly that’s a red flag.

#7 They value your opinion. If you’re really good at your job, they’ll value your opinion regardless. But, if they’re into you, you’ll notice them taking more interest in what you have to say and supporting your ideas. These are subtle hints, but they can tell you a lot about someone’s intentions.

#8 You hang outside of work. It’s normal to become friends with your colleagues and want to spend time with them outside of the office. But, if you are attracted to each other, you’ll make time to do “coupley” activities together. You’ll go to the movies, grab dinner and drinks. Does this sound like you two are “just friends?” [Read: 15 signs of sexual tension at work and ways to break the tension]

#10 They tease you. I know it sounds a little juvenile, but there’s some truth to it. Teasing is a form of flirting, and if someone is lightly teasing you, they’re gauging your reaction. They want to see if you’re interested in something more with them. By flirting, you create sexual chemistry, and they want to know if you’ll take the bait. [Read: 15 signs your coworker is looking for a workplace romance with you]

#11 You are on social media. I would never have my colleagues or bosses on my social media account. Unless we’re close friends, of course. But if they’re the ones to initiate adding you on Instagram or Facebook, there’s a reason why. They want to overpass the office relationship and become more intimate.

#12 They give you gifts. And no, I’m not talking about a microwave or something wrapped in a red bow. These gifts are more “office appropriate.” For example, they bring you coffee in the morning or get you a new stapler. It makes it look like no big deal, but these gestures mean a lot. [Read: The signs someone is flirting with you at work]

#13 They’re always there. Whether you’re in the kitchen or at your desk, they always just seem to be there. They’re trying to find an opportunity to talk with you, that’s why they’re always around. The next time you leave a meeting, see where they go. They’ll probably follow you, in a non-creepy way.

[Read: All the ways to get your crush to come talk to you]

After looking at these signs a coworker is sexually attracted to you, what do you think? Is this a one-sided crush? Or does it look like someone may have a crush on you as well?

PREVIOUS11 Rules for Getting Back Together with an Ex & Protect Your Heart
NEXTWhat Is Casual Dating? How to Know for Sure If You Can Handle It