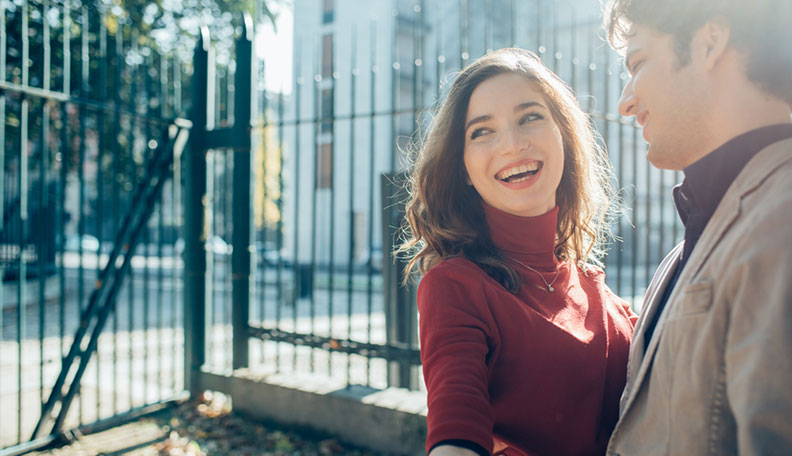 You really like her but don’t know what to do. You’re not sure of the signs she is hiding her feelings for you. So, it’s time to find out the truth.

Love isn’t as straightforward and easy as we like to think it is. When anything involves two humans, it’s never a straight line. Instead, it’s like a roller coaster, going up and down, side to side, and all you can do is ride it until the end. Which is why understanding the signs she is hiding her feelings for you is so valuable.

To be honest, I liked many guys but would hide my feelings because either I was shy, thought they didn’t like me, or I battled with my head if they were the right one for me. I know you don’t want it to be the latter, but these are normal thoughts people think.

People are scared to make mistakes, so, before making a move, analyze and see if it’s the best choice for them. [Read: Make a girl smile and love being around you]

Signs she is hiding her feelings for you

With that being said, you shouldn’t wait around for someone to figure out if they want to be with you or not. Instead, you need to be proactive and see if she has feelings for you. You can always ask her without figuring out if she likes you, but, I know, it’s easier for you if she does like you.

Then, after assessing the signs she is hiding her feelings for you or not, you make a move! Why wait? Why not just take a chance at love?

#1 Body language. At the end of the day, no matter how much she hides her emotions, she cannot hide her body language. Body language is non-verbal communication. Sometimes we do things without even thinking about it. She may smile around you a lot, play with her hair, sit near you, and touch you when you make a joke. She wouldn’t do that if she didn’t like you. [Read: Watch for these subtle body language cues in a women]

#2 She’s flirty over text. She may be shy in front of you, but when you text each other, she’s flirtatious. Not everyone does well in front of other people, but feel more relaxed when talking on the phone or texting. She could really like you, but she’s intimidated and frankly scared of getting hurt. This is why she’s so low-key around you. [Read: How to win your crush over via text]

#3 Her friends know about you. Now, girls talk about every guy, but the ones that we really like, we talk highly of them. Her friends already know who you are. She’s probably gushed to them about how great a guy you are. You may have met them once or twice, but they know you very well.

#4 She’s always there for you. Maybe you have an important test coming up or a basketball championship game. No matter what, she’s the first one to text you to see how the test went or sitting in the stands at the game. If she’s into you, she’ll support you through whatever obstacles you have in your way. [Read: How to tell if a shy girl likes you – The secrets revealed]

#5 She’s apologetic. No one apologizes as much as she does to you. She doesn’t want to screw things up. Plus, she’s insecure, so she’s quick to apologize. Most of the time, she doesn’t have to say she’s sorry, but she likes you a lot. She’s nervous as hell around you.

#6 She laughs at your jokes. No one said your jokes were good. Honestly, they’re probably not that great. But who cares. She thinks they’re hilarious and will laugh at every joke you pull out of your hat, even your worst dad jokes. We typically only laugh at jokes from people we find attractive. If every joke you tell has her crying from laughing, she’s into you.

#7 Eye contact. When she talks to you, she looks you straight in the eyes. She may look away and blush if you look back at her. But when you talk, she’s listening. Eye contact shows attraction. So, if her eyes are on you, unless you have spinach in your teeth, she’s into you. [Read: The ultimate covert signs to know if a girl is really into you]

#8 She remembers the details. I can’t remember anything. Remember, everyone is different. But women remember things that we feel are important. Now, if she’s into you, it could be the way you like your coffee or the secret that you told her.

Does she remember where she put her car keys? No. But she remembers the small things that you show and tell her because those matter to her.

#9 She’s jealous of other women. Now, at the end of the day, no matter if shy or loud, tall or short, everyone feels jealousy when something they want has the chance of being lost. For example, a cute girl flirts with you in front of her. Now, you catch a glimpse of jealousy from her, and if so, she might be hiding her feelings. You wouldn’t feel jealousy for someone you didn’t like. [Read: How to ask a if she likes you without really asking]

#10 She gets awkward. Not everyone is cool and collected when talking to people they like. If she’s like me, she’ll probably be stuttering and fidgeting while talking to you. No, she doesn’t have a twitch. She’s just really nervous to be around you. She may not know what to say or completely forget how to act naturally because she cannot contain her emotions.

#11 She goes out with you. When you ask her out, whether it’s in a group or just the two of you, she goes. And she goes without hesitation. In fact, she’s super excited to go out with you because she likes you.

Now she may be nervous and shy. If she continues to see you then she obviously likes you on a deeper level. It may just take more time for her to relax, so, be patient. [Read: How to talk to a shy girl and get her to open up]

#12 She follows you on social media. Now, she doesn’t just follow you, but she also watches your Insta stories and likes your photos. Five years ago, this wouldn’t matter. But now technology is such a part of our lives, this is a sign. She may be shy or hiding her feelings around you, but she’s actively following your life.

[Read: Don’t ignore these signs that a girl DOESN’T like you]

Now that you know the signs she is hiding her feelings for you, if you think she likes you, it’s time you made a move! Sometimes, you just have to take risks.