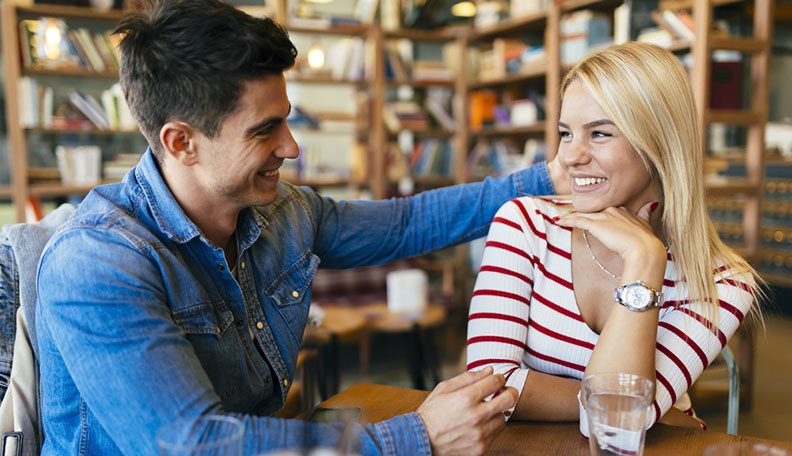 You’ve been on that nervous first date, you went on a second, but now you’re on your third. It feels like progress, but what does a third date mean?

The dating game can be very confusing. I mean, there are many unspoken rules. If they’re unspoken, how are you actually supposed to know about them? How do you know if you overstep a rule? How do you know if you didn’t do something you were ‘supposed’ to do? What about understanding what does a third date mean? Or a first date. Yikes!

It’s for these reasons that I gave up on the dating rules a long time ago. These days, ladies and gents, I play by my own rules. I find it easier and less confusing. And I end up actually being myself, rather than an anxiety-ridden dater who can’t remember her own name.

Despite that, there are certain things which traditionally happen at certain times. We’re not supposed to put pressure on ourselves. That’s a truth, but they’re kind of universally known. For instance, a first date is nerve-wracking, whether you’re a super-confident Kardashian or not.

[Read: The clues to know if your first date went well]

The thing is, the third date is far more important than you might think. Most put a huge amount of focus and importance on the first date, quite a bit on the second, and by the third we think the deal is done. The dating will continue without us having to be our very best version of ourselves.

The first date is about getting rid of nerves and scoping out the other person. The second date is ‘that was fun, let’s do it again.’ You’re still not quite sure of the person, because how can you be after just two dates? The third date is often what clinches it, or what makes one of you say ‘nah, not for me.’ [Read: 13 warning signs to look out for on the first few dates]

The good and bad of the third date

We often let our guards down by the third date. It can be both a good thing and a bad thing. It’s good because we’re showing the other person far more of who we actually are deep down. Relationships are supposed to be about real-person connections, not false identities. Letting your guard down in that regard is great.

The downside? You’re not out of the needing to be on your best behavior stage yet. By becoming too relaxed, you’re possibly going to say something which could offend the other person, make a joke they won’t appreciate, etc. Remember, you don’t really know them by this point either.

It’s tricky. Third dates can be the difference between date number four and onto the future, or ‘that was nice, let’s not do this again sometime.’ [Read: How to plan a date to knock the socks off anyone you want to impress]

What exactly happens on a third date?

Let’s get one thing out of the way. There is, and should be, no pressure for intimacy at this point. If you want to, hey, go for it. But if you don’t, that’s perfectly fine too. Just because you’ve been out twice before doesn’t mean you’re automatically at the stage where you need to take your clothes off.

Personally I would say that a third date means you liked each other enough to spend time together twice before and want to continue getting to know one another. There is no commitment to a future, or commitment to actually say you really like this person. You simply want to find out more. You’re intrigued, let’s say.

There are still plenty of chances that you’re going to walk away and never see them again, and they could do the same with you. That’s the thing with dating, it’s like a game of illusions, nobody really knows what the other person is thinking. Nobody really knows what is going to happen. Terrifying? Yes. Exhilarating? If you let it be, yes! [Read: The third date rule and why it works so well!]

Going deeper the third time around

A third date is about conversation. It’s about trying to forge a connection that goes beyond the nerves of the first date, and even the second. You’re probably going to sit and talk more, be more open and honest, and you might have thought a little in your own time about whether you can actually see yourself with this person or not.

While you sat talking on this third date, allow yourself to relax, be yourself, but always be mindful of the fact you don’t know this person that well yet. Again, it’s great to be yourself, but avoid those habits you would indulge in when with your friends and family! The best behavior stage is still very much in place! [Read: Third date tips to really fall in love with each other]

It’s also important to realize that your opinion of the other person might start to change a little. You might see quirks within them that you didn’t see before, now that the initial ‘oh my days, I’m so nervous’ stage has worn off a little. You might like those quirks, or you might not. Be open to them. You might also find yourself talking more, because the nerves aren’t as acute, and you’ll probably have more in-depth conversations about the things that are important to you as a result.

Put simply, the third date is a real getting to know you kind of deal, and whether or not it goes well, you have to have a ‘what will be, will be’ attitude. [Read: Are they dating material or a hookup?]

So, what does a third date mean?

Dating is a totally one size doesn’t fit all thing. For one person, a third date might mean it’s time to jump into bed. For another person it might be a last chance audition to decide whether or not they’re future material. Or a third date could simply that they enjoyed the other two dates, and they want to see if they enjoy the third.

Avoid putting pressure on yourself and impressing by simply not being who you are. Hold back the extreme bits, of course, but just go in there and be the person you know yourself to be. Be open, be honest, and be real.

Hopefully, the other person will have the same mindset. From there, you can really get a glimpse of whether you want to continue seeing this person into date four and beyond, or whether its really run its course. Not every dating experience is meant to last, but the ones that do are often the more laidback to begin with.

[Read: What you need to understand about dating]

What does a third date mean? It means you’re going to see this person for a third time. That’s really all you need to think about. Avoid putting pressure on yourself or putting a label on it.

PREVIOUSWhy It’s Normal to Feel Strange When Your Ex Dates Someone New
NEXTThe Right Priority in Your Relationship: How to Find & Focus on It