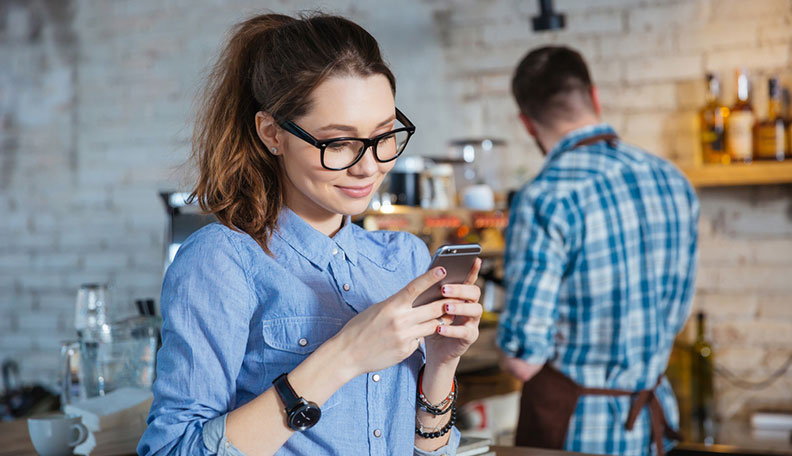 You type something, you press delete, you think, you start again.

Wondering how to start a conversation with a guy over text? It’s easier than you think!

If you’re wondering how to start a conversation with a guy over text, the good news is that it’s really not as difficult as you might think. All you need to do is go for it. Be unique. Be you.

The dating world has been revolutionized by technology. Once upon a time, asking someone out was a terrifying, gut-wrenching experience which required serious courage and several drinks. These days, it can be done via social media. If it doesn’t work out, you simply disappear from the online world for a few days to recover!

Time to think outside the box

The problem comes when phone numbers have been swapped and you need to actually start a conversation. What are you supposed to say? You want to get the balance right between casual and keen, but you don’t want to come across as overeager. Oh, the drama!

Don’t go for the “Hi, how are you” line. It’s boring, overdone, and not at all inspiring. Instead, think outside the box, and above all else, be yourself! Think about how you would want someone to text you for the first time, and what would get your attention.

Above all else, remember, at least you don’t have to approach them in a busy bar anymore!

Of course, first things first you need the digits, and we’re going to assume that you’ve already managed to get these magic numbers because you want to know how to start a conversation with a guy over text!

Pat yourself on the back for getting this far. The fact he’s given you his number says he wants you to text him! He wouldn’t give you the number if he didn’t like you back, so always keep that in mind.

How to start a conversation with a guy over text

Know what you want, as that will make post-message regret less likely! There’s nothing worse than the text conversation coming to a natural pause *as it will* and kicking yourself because you never got to say what you really wanted to.

I think it’s always a good idea to draft your first message on your phone somewhere else, e.g. your notes app, rather than straight into the message. If you want to change it, what if you accidentally press send? There’s no way to get it back then!

Drafting in your notes app means you can read it, re-read it, tweak it, and read it again before you paste it into the message box and send it. I have had more than one disaster with sending a message before I was ready, so learn from my mistakes and take my advice!

Okay, you have your notes app open, what are you going to say? I mentioned being unique, but remember that there is a fine line between unique and downright weird. There is nothing fun about receiving a text that you have to read several times in order to understand, or one which makes you cringe.

Steer clear of slang and emojis

Also, when it comes to knowing how to start a conversation with a guy over text, keep your language normal, and avoid those annoying slang terms and emoji overkill. I might be a little old fashioned here but “Hey, how R U” doesn’t make me want to date someone, it makes me want to give them an English lesson! Seriously, it takes seconds to write something properly, so put in the time.

There is nothing wrong with “Hey *insert name here*, just wanted to say hi. What are you up to?” That’s friendly, it’s chatty, and it ends with a question. The question is important because that gives them a reason to text back.

If you simply tell them that you wanted to say ‘hi’, there is no 100% obligation to actually reply. I mean, it’s polite to do so, but not everyone is polite! By asking a question, you’re encouraging a response, and from there you can build the conversation.

Make peace with being the instigator

It might be that you’re not entirely comfortable with being the one who makes the first move, but it’s something you should embrace and make peace with. It’s likely that for the first few texts at least, you’re going to be steering the conversation.

You’re asking questions and trying to think of the next thing to say. That’s fine and totally normal. Remember, the guy is probably feeling a little nervous and not sure what to say too!

Think about a few questions, even something simple like “Did you have a good day?” Remember, questions are good because they invite responses.

Remember, there is going to be a natural lull in the conversation, because life happens and maybe dinner is ready, or your guy needs to go out. It’s fine, and it will restart if he’s interested. He gave you his number so that’s a good sign in that regard!

Look for clues in his messages and try and ascertain how he feels about the conversation. If you’re not feeling it, it’s fine to back off a little. Guys are guys, and that means he’s going to wonder why you’ve slowed down and want to know where you are! I don’t advocate game playing, but sometimes you need to play a guy at his own game a little!

When to ask them out

When you have been texting back and forth for a while and you’re pretty sure there’s a spark, when should you ask them out? Maybe they’ll ask you and you won’t have to think about it, and that’s quite likely. If there is no question coming your way, be the one to do it. Go on, be brave! This isn’t the 1920s when a woman had to wait to be asked out!

You can do this very casually, “I’ve been going to this really cute coffee shop lately, do you fancy joining me?” Or “There’s a band on next week I really want to see, do you want to come?” If he says yes, fantastic. If he doesn’t respond in the way you want him to, shrug it off and move on.

Seriously, there are plenty more fish in the sea, and nobody has time for a text wasting guy! If the conversation has been going well so far, the chances of him refusing a meet up are extremely slim and should give you the confidence to take the texts to face-to-face meetings.

Understanding how to start a conversation with a guy over text is nowhere near as hard as you might think. He’s probably waiting for your message in all honesty. Take the plunge, see how it goes, and be brave. You never know!

PREVIOUSHow to Help Your Ex Move On, Get Over You for Good and Find Peace
NEXTDating Exclusively but Not in a Relationship? The Grey Area Dilemma