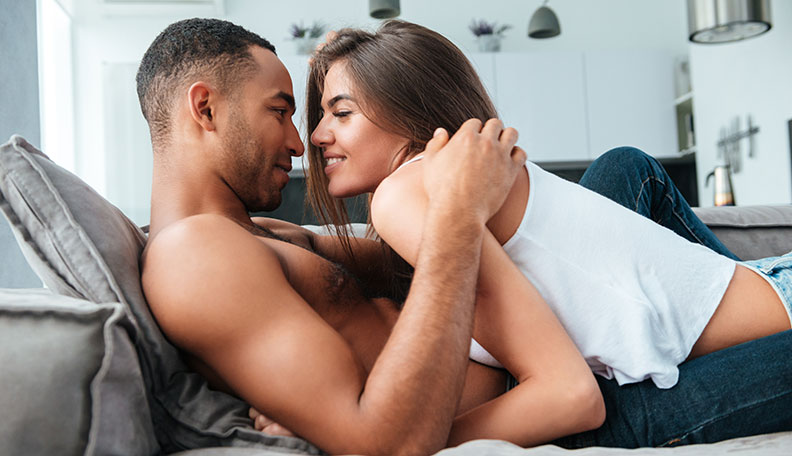 There are several things guys like in bed but won’t ask for. Some might even surprise you! What does your guy secretly desire?

Is your guy secretly coveting something in the bedroom, but he’s scared to tell you? There are many things guys like in bed but won’t ask for. Sometimes it’s because they’re scared you’re going to laugh. Other times it’s because they think you won’t be up for it. They don’t want to make you feel uncomfortable by asking.

If you want to spice up your sex life, why not try asking your guy what he wants between the sheets? It might be enough to prompt him to tell you his deepest desires.

Things guys like in bed but won’t ask for: Prepare to be surprised!

We all have our own secret preferences when it comes to bedroom time. Some things you’re shy to talk about, so you never actually try them out for yourself. However, there are some things which are just standard and happen time and time again.

Sex can become quite samey if you don’t push your boundaries from time to time. Of course, you should be comfortable with what you’re doing, and your partner must be totally okay with it too. But trying new things can bring a whole new dimension to your sex life. It can bring you closer together as a result.

#1 For you to take complete charge. Many men find it a total turn on when their partner takes complete control of everything. They’re able to relax and enjoy it all. However, many men won’t tell you this because they’re worried it makes them look lazy, or that you’re not going to want it yourself.

Taking charge gives you a powerful kick. It makes you feel like you have your man’s pleasure completely in the palm of your hand, and it’s a truly heady feeling. Give it a go. You might enjoy it too! This is also one of the most common things guys like in bed but won’t ask for. [Read: What do guys like in bed? How to please him the way he desires]

#2 To be cuddled after sex. We assume that the man has to be the cuddler after sex, but he wants to be cuddled too! When you’re spooning, turn things around and you be the big spoon. He’ll appreciate that he didn’t have to ask. He’ll feel loved and cherished. Your partner needs to feel that way too! [Read: How to make your man happy in 20 little ways]

#3 To be teased to the point of no return. One of the things guys like in bed but won’t ask for is for you to take total charge. And they may also want you to tease them to the point where they completely lose it. Again, it’s a power kick for you, and he’s going to feel pleasure like he’s never felt before.

#5 For you to initiate sex more often. Guys often feel like they have to be the ones to initiate sex, but most guys wish you’d take the pressure off and do it too. One of the most common things guys like in bed but won’t ask for is for you to surprise him. Let him know that you want him – right now. Of course, it’s scary because you don’t want to be rejected, but let’s be honest, that’s highly unlikely to happen!

#6 To try a little light bondage. The kinky antics seen in 50 Shades opened bondage up to the masses. It’s definitely one of the things guys like in bed but won’t ask for. He doesn’t want you to think he’s strange.

There’s nothing strange about wanting to try a little light bondage. In fact, it’s one of the most common sexual preferences around and extremely enjoyable when done with someone you trust. To help you feel better, decide on a safe word and let your imagination run wild! [Read: How to have naughty sex and go crazy in bed with these wild moves]

#7 To be given a sexy lap dance. It’s quite possible that your guy would love you to give him a sexy lap dance… even a striptease. But he’s not sure how to go about asking you for it. Take the pressure off and jump straight in there instead. He’s bound to enjoy every single second, and the sex afterwards will be sensational as a result.

#8 To see you touching yourself. Sexy time spent alone is quite a personal thing, but many guys get off on seeing you touch yourself in your most intimate of places. It’s one of the things guys like in bed but won’t ask for. They’re worried that you’re not going to be comfortable.

If you want to give it a try and feel self-conscious, close your eyes and simply let yourself be taken away with the sensations. He’ll adore what he’s seeing, and you’ll completely forget he’s watching! [Read: How to finger yourself and bring yourself to ecstasy in front of your guy]

#9 For you to talk dirty. How do you feel about talking dirty? Some people love it and find it easy. While others feel super-awkward and can’t get the words out without wanting the ground to open up and swallow them whole. As a result, it’s one of the things guys like in bed but won’t ask for.

Start slowly. Simply tell him what you want him to do to you or how it feels. The more your confidence grows, the more you’ll be demanding what you want in extremely vocal ways! [Read: How to ease into talking dirty in bed without feeling awkward]

#10 To try sex somewhere risky. First things first, be careful where you attempt this. Being arrested for public indecency is not to be recommended. However, getting down and dirty somewhere a little risky is definitely a fantasy for many, men included. Because of the risk, he might be loath to suggest you try it. If you’re equally curious, let him know it’s on your wish list. Then work out somewhere to give it a try!

How many of those fantasies would you like too? Often, your guy won’t tell you what he really wants because he doesn’t want you to think badly of him or for you to feel uncomfortable. However, there is nothing wrong with vocalizing your fantasies and telling your partner what you’d like to do.

There’s no pressure to actually do it, simply talking about it is sometimes enough to make the next sexual encounter more than explosive!

[Read: How to talk about sex without sounding like a pervert]

There are many things guys like in bed but won’t ask for. Make it easier for him and ask him what he wants. The key to increased sexual intimacy is communication. Give it a try!

When Will I Find Love? 20 Secrets that WILL Help You Find the One

Asking yourself, “When will I find love?” is the wrong question. Here are all the…