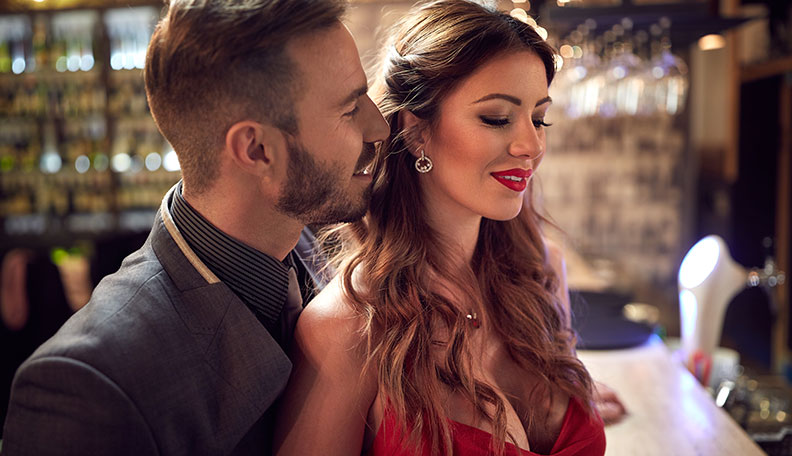 You’ve met a new someone and you’re feeling the frissons of attraction. How do you read between regular flirting and that special kind of sexual flirting?

It’s a special feeling. It’s a sexy, unique feeling, and one which takes over your consciousness, leaving you unable to concentrate on much else. I am, of course, talking about sexual flirting and the sensation of being so into something, you literally want to devour them in one sitting. You want them, you know they want you too because they’re mirroring your flirtation, and it’s going to happen sometime, sometime soon.

This building of sexual tension is one of the best feelings at the start of a relationship, but it can also be something which happens between two people who aren’t in a relationship. This is how hooks ups begin!

Whether you’re in a relationship or you’re not, sexual flirting is fun, it’s just the right side of naughty, and it will make the anticipation and build up to the main event something you can’t get enough of.

But, what exactly is sexual flirting, and how is it different to regular, ‘I like you’ flirting.

What is sexual flirting really?

Sexual flirting isn’t about ‘I like you’, it’s about ‘I want you’, and there’s a very real difference between those two statements. You can like someone and want to get to know someone, whilst also wanting to get closer to them. But if you want someone, you don’t always have to want to get to know them. Think about Tinder for one, much of the flirting that goes on is downright sexual and nothing else!

If you’re not sure how to go about performing sexual flirting, and you’re trying to give someone you’re seeing the heads up that you’re feeling a little, shall we say, frisky, then let’s check out a few features of this special, steamy type of flirting. [Read: How to know if someone is thinking of you sexually and desires you]

Give these a go!

#1 The eye contact and coy smile combo. We’ve all seen this one, and we’ve probably done it without realizing it. Sexual flirting 101 is catching his or her eyes, looking down for a second and then letting your eyes run up their body to catch their eyes once more, all with a coy smile on your face. If you bite your finger or sip on a straw at the same time, you get bonus points for extra hot sexual flirting. [Read: Very subtle eye contact flirting moves that work like magic]

#2 Talking just a little naughty. There is a difference between dirty talk and naughty talk, and when you’re trying out sexual flirting, you need to stick on the naughty side of the spectrum. Dirty talk is for when the deed actually happens, not before!

Again, coyness is the way to with this one, something like ‘I’m sorry I can’t help but stare at your biceps’ and then cover your eyes in a joking way and say ‘oh I can’t believe I just said that’, to cover it up and give an innocent edge. Sexual innuendos work wonderfully well in sexual flirting, because they’re thinking ‘did they really just say that? Or, am I imagining it?’, and it keeps the game flowing back and forth. [Read: 30 subtle, obvious and very sexual flirting tips for girls]

#3 Invade their space. You know that regular flirting involves slight touching, e.g. touching their arm when you laugh, or a joking nudge, but sexual flirting takes it up a notch. Now, be careful not to cross any lines here, you’re trying to invade space not invade their personal boundaries!

I’m talking about standing just a little closer than you normally would, so they can feel your breath against their skin. That odd brush against their skin that’s just a second longer than is necessary. These are all sexual flirting hints that aren’t heavy, but make them think ‘hmm, there’s signals coming my way here’.

#4 Make your compliments suggestive. If you’re going to compliment them on any part of their body, make sure you add in a hint of suggestion. For instance, when you’re trying out sexual flirting, you won’t say ‘oh I love your eye colour’ because that’s general flirting and it’s cute, not hot. What you want to do is pick a body part which is close enough to the main event, but nothing too direct. So, ‘you know, you have great legs’ is a good one. Legs aren’t offensive, but they lead somewhere quite sexual…

#5 Stroke their hand. This one might sound ridiculous at first, but hear me out. When you’re out in public, sat holding hands perhaps, make lazy circles on their palm. It feels fantastic, and it’s just enough suggestion to make them know what you’re thinking about. It’s not a full on PDA, and it’s not going to make anyone uncomfortable, but the two of you will know where it’s going. [Read: How to flirt sexually by touch without making it obvious at all]

Why you should hold it back, just a little

The above five ways are top examples of sexual flirting. You don’t want to be direct and too full on. Firstly, if they’re flirting back there’s a good indication that they’re on the same page as you. But you don’t know for sure, especially if it’s the start of getting to know each other, or you don’t know them well at all!

By going too far, you run the risk of them becoming upset and running away. And that’s never a pleasant experience for either party. Sexual flirting is about testing the waters, seeing if there might be a possibility of more about to happen.

Of course, sexual flirting is also great fun, and when you’re batting the same signals back and forth, you’re going to feel amazing right in that moment. It’s about the anticipation, and it’s about keeping that going for as long as you can, before you both spontaneously combust and can’t take the tension for a second longer! By that time, you both know what’s happening next. [Read: What does sexual attraction feel like? Explaining the exact feeling]

When you notice that things are heading towards bedroom 101, hold it back, just a little. Why? Because the longer this flirting goes on for, the more satisfying the final deal will be! You’ll both be in a state of frenzy and can you imagine how amazing it’s going to feel when relief comes to the two of you? Divine!

The importance of reading your flirting partner well

I should point out however that sexual flirting is a little risky. I say this because some people can’t handle it as well as others. For instance, if you are flirting with someone who is quite shy, they might not feel comfortable, and may feel that you’re coming on too strong. [Read: 14 signs of lust to recognize intense sexual tension]

If you’re trying to build a relationship with this person, they might also feel that you’re pushing things too fast. I can’t give you much advice on this one, other than to test the waters and do what you feel is right. You know this person in this situation, at least a little, and you know whether they’re shy or they’re a little more reserved.

Some people don’t like to acknowledge sex and attraction, they simply act it out rather than talk about it or show it. That’s their choice to work that way and you have to respect it.

This is also where a lot of Tinder conversations go from promising to zero within a few minutes. You talk to someone, they seem great, and you do not have hook up on your mind. Suddenly they’re hitting the sexual flirting buttons left, right, and centre, and it’s just too much too soon. You don’t talk to them again.

When it finally happens, all the time you put into this sexual flirting business will pay off, believe me!