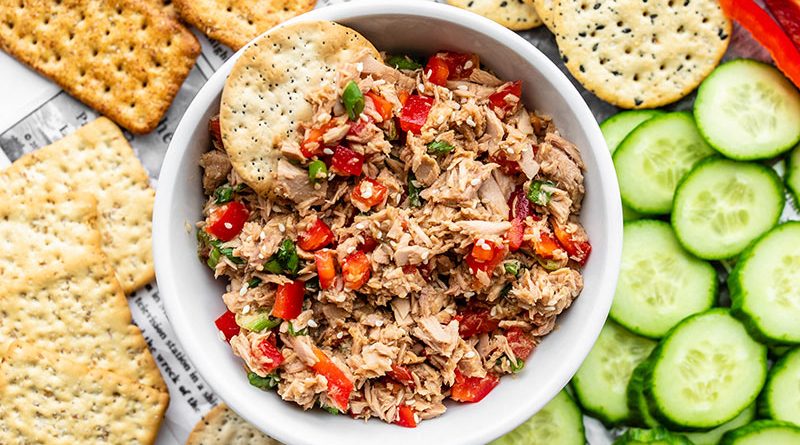 Canned tuna is a lot more versatile than I think many people realize. In other words, there’s a lot more you can do with it than just mixing with mayo and slapping it between two slices of bread. ?If you’re tired of the traditional mayo-based tuna salad, give this lighter, brighter, Sesame Tuna Salad a shot. It’s savory with a hint of sweetness and deep nutty undertones, and can be served several ways. Scroll down to see ideas for substitutions and add-ins, as well as a few different ways you can gobble up this tuna salad. 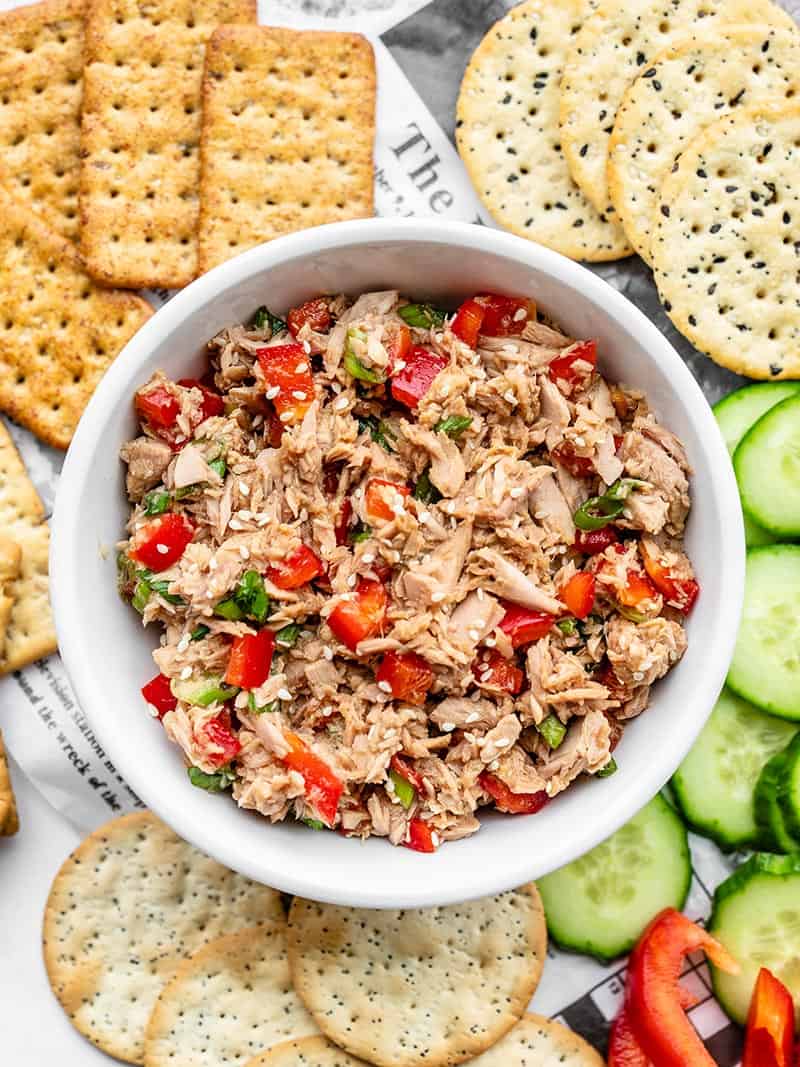 If needed, you can substitute the red bell pepper with one shredded carrot. The carrot will supply a similar mild sweetness and a decent amount of crunch. Use a large-holed cheese grater to shred the carrot.

What is Toasted Sesame Oil and Can I Substitute It?

Unfortunately, toasted sesame oil isn’t always labeled as “toasted” but you can differentiate it from regular sesame oil by the color. Un-toasted sesame oil, which has a very mild flavor, is a light straw color similar to canola oil. Toasted sesame oil, on the other hand, has a deep amber color. You can usually find it in major grocery stores in the International foods aisle, near the Asian ingredients.

If you’re not into toasted sesame as a flavor or can’t source this ingredient, try my Sweet and Spicy Tuna Salad as an alternative.

There are other fun things that you can add to this Sesame Tuna Salad, if you have them on hand. Edamame would be a great way to stretch the tuna salad, while adding both protein and fiber. Chopped water chestnuts would also make a fun, fresh, and crunchy addition, as would slivered almonds. If you like a little spicy kick you can always add a pinch or two of red pepper flakes.

How to Serve Sesame Tuna Salad

I love this recipe because of all the different ways you can serve it. As shown in the photos, it’s great on crackers or cucumber slices. You can also serve it over a bowl of rice with a few cucumber slices as a nice bowl meal, or use it to fill lettuce wraps (with or without rice). You could even use it to make a more American style wrap sandwich in a large wrap with baby spinach. And lastly, this sesame tuna salad would be a great topper to any bed of greens.

Find these glass meal prep containers in my Amazon shop.

This fun spin on canned tuna is savory, sweet, and nutty. Sesame Tuna Salad is great on crackers, sliced cucumber, in lettuce wraps, or on salad greens.

Servings: 2 about 1 cup each

Scroll down to see the step by step photos!

How to Make Sesame Tuna Salad – Step by Step Photos

This little bottle is where all the magic happens. Toasted sesame oil has a VERY strong nutty-sesame flavor. This brand labels it as “toasted” but sometimes the bottles just say “sesame oil.” You can tell it’s toasted vs. un-toasted by the color. Toasted sesame oil is a deep brown/amber color. Un-toasted sesame oil, which has a very mild flavor and is better suited for cooking, is a light straw color, like canola oil.

Give the sesame dressing another quick stir, then pour it over the ingredients in the bowl.

Carefully fold the ingredients together until everything is coated in dressing. Don’t stir so vigorously that the tuna completely shreds. 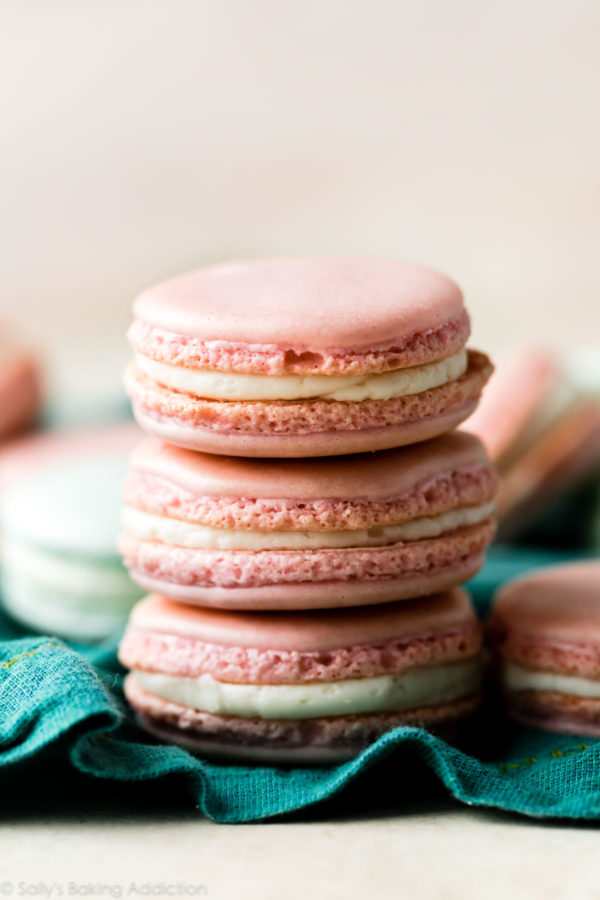 This is an in-depth beginner’s guide to homemade French macarons. This post includes a kitchen-tested recipe, plus plenty of success... read more

16 Magical Ways to Use Your Instant Pot

Let me read your mind. You're in love with these chocolate caramel oatmeal bars and their ooey-gooey-chocolate-caramel middle layer, tied... read more 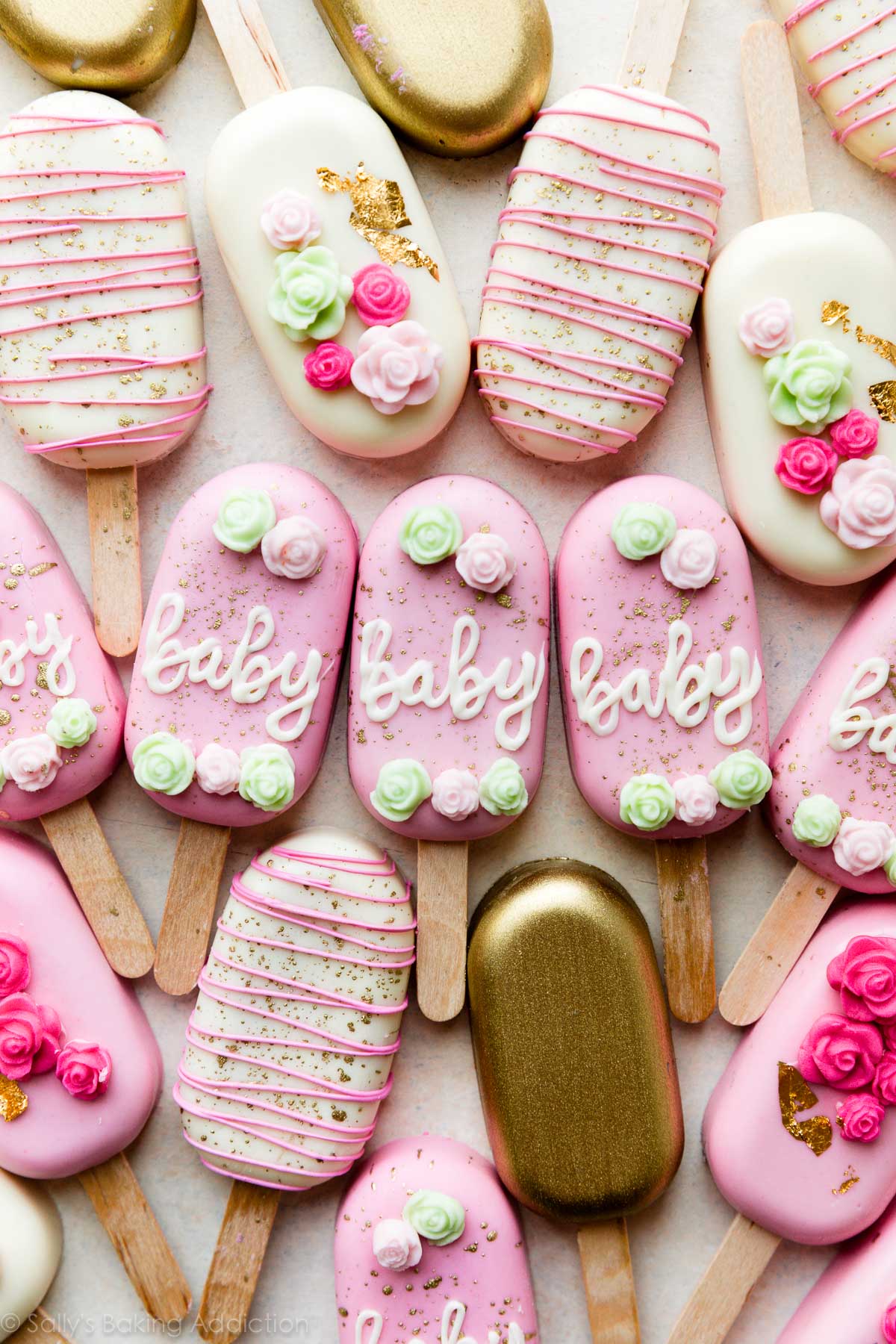 Very special cake pops for a very special occassion. I ordered these cakesicle pops from the lovely and mega talented... read more 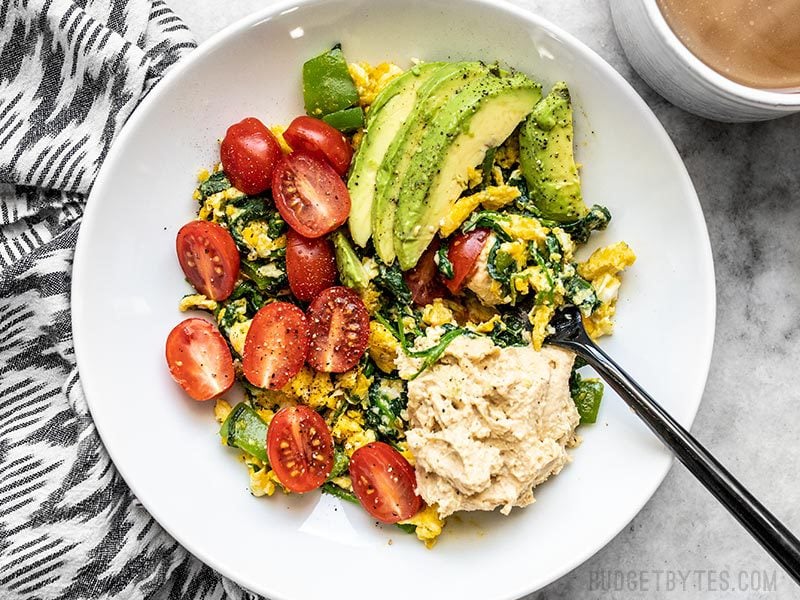 $2.19 each Many of my day to day meals are just a hodgepodge of random ingredients that I find in my... read more 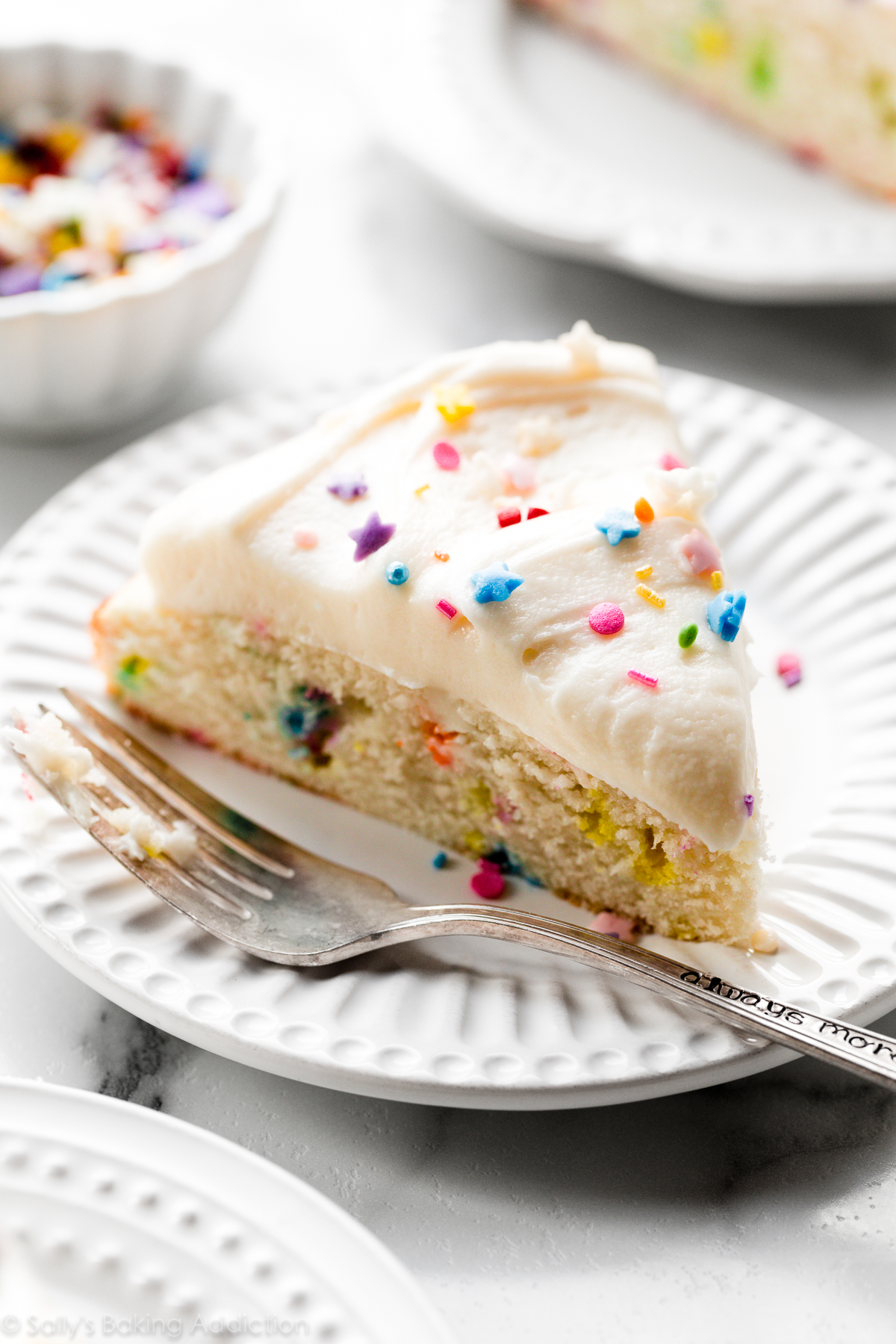 There’s nothing like sprinkle cake to make you feel like a kid again! Reminiscent of box funfetti cake mix, this... read more 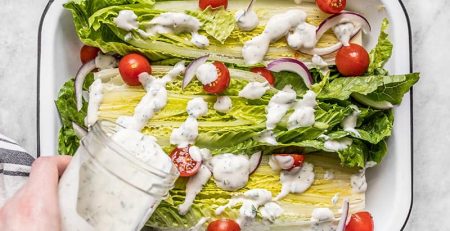 The last time I checked in with a personal update was nearly a year ago! Last September, I had a 2... read more

It’s the official end to my 6th annual Sally’s Cookie Palooza! Thank you so much for sticking through all these cookie... read more 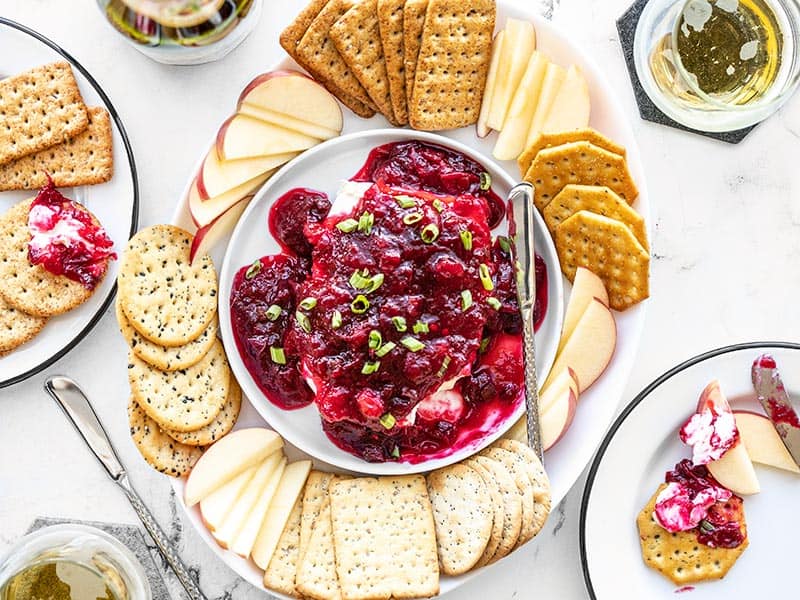 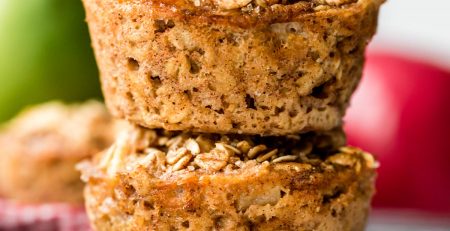