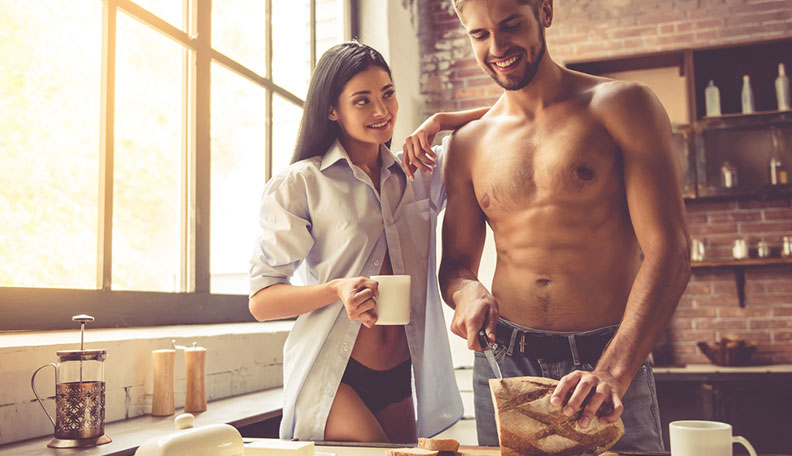 You slept with a guy on your first date, and the sex was really good. Learn these tips for how to keep a guy interested after sleeping with him.

Wondering how to keep a guy interested after sleeping with him? Well, who hasn’t wondered this before?! Honestly, I think we’ve all slept with someone we met on a first date. This isn’t something new. Most of the time, it was because the chemistry wasn’t bad, and we needed to scratch an itch.

But there are some cases where you wouldn’t mind seeing him again and again and again. You get where I’m going with this. But the big question is: how do you get him to stay interested in you after you gave him the goods?

I don’t want to go all out and say that all men are driven purely by sex, but when it comes to casual encounters, this is a big reason. [Read: The things to avoid when you want to get a guy to like you]

How to keep a guy interested after sleeping with him

There were times where after I hooked up with a guy, I realized that I liked him and thought that maybe we could try going on a real date. You know, one that doesn’t end up in the bedroom. Now, this isn’t to say it’s impossible, it is possible, but it’s going to take some work.

Since you already slept with him, it’s going to be a challenge, but then again, if he’s not into you after you had sex with him, then he isn’t someone you need to be chasing after. Can I get an amen?

Okay, you’re here, so it’s about time I showed you some guidelines to follow when it comes to keeping him interested in you. Time to get him chasing you for more. [Read: 14 ways to show a guy you like him and still be a tease]

#1 Don’t start acting needy. This happens with both men and women when we’re into someone, we text them eagerly. You just had sex with him so you already went to an intimate place with him.

In his eyes, when you text him an hour later or every morning after, he’s thinking you’re wanting more. And you can want more from him, but don’t scare him away. Don’t be too eager. Let him text you after you hook up with him. [Read: 10 common mistakes women make in relationships]

#3 Let him know you liked the sex. Listen, when you sleep with someone new, you obviously have a lot of thoughts going on in your mind. You want to know if they liked it, if you pleased them. It’s normal. Though many men act like they’re tough, they’re not.

Most of them have fragile egos and are worrying about the same things as you are. Let him know how you felt sleeping with him, give him a little ego boost.

#4 Ease off the pressure. If you really want to keep him around and learn how to keep a guy interested after sleeping with him, don’t pressure him. Now, if you’ve been sleeping together for a year and nothing is happening, then you can ask questions. But if it’s been two days since you slept together, do not start pressuring him with the definition of the relationship. Take it easy or else he’s going to run. [Read: 20 reasons why a guy could be ignoring you]

#5 Let him chase you. Ladies, I know you may like him but don’t chase him. The worst thing you can do is chase a guy. Men are hunters, if you’re not giving him something to chase after, he’ll find something else. Make him work for it. It’s okay to ignore him from time to time or play a little game of hot and cold. You don’t have to be an asshole, but let him know he needs to work for it. [Read: Why men love a chase and how to use it in your favor]

#6 Talk with him. Yes, you slept together, but there are more things you have in common than just that. If you took some time to actually speak to him, you’ll notice some things in common. This is good because you need to connect with him if you want to keep him around.

#7 Look good. Not for him though. You need to look good for yourself. That way, you’ll feel confident around him. By doing that, you’ll show him that even though you may be interested in him, you’re not goo-goo eyed over him. Other men will look at you, and he’ll notice that he’s not the only one that has eyes on you. [Read: The art of feeling sexy and desirable all the time]

#9 Be mysterious. No, you don’t need to wear a cloak and talk in old English. But don’t be an open book with him. Sure, you can reply to his texts, but don’t open yourself up too much. Instead, give him the same amount of information that he gives you. That’s it, nothing more, nothing less.

#10 Spend time with him after sex. If you had sex with him and are planning on having sex with him again, spend time with him. After having sex, hang out with him, cuddle, watch a movie, talk. The more time you spend together, he’ll be able to get to know you and vice versa. If you just have sex and leave right away, that’s all it will ever be. [Read: Learn the secrets to cuddling with a guy]

#11 Focus on his brain. There’s more to a relationship than sex. If you already had sex with him and he enjoyed it, then you’re in the clear. Now, work on keeping him mentally stimulated. In other words, fuck his mind. You’re not just a sexual object, you’re a person with a sense of humor, intelligence, and charisma. Use it.

#12 Keep your independence. Men get scared easily, like really easily. They don’t want to feel that they’re being pushed into a corner. Which means you need to focus on keeping your independence. Let him see that you don’t need him in order to live your life. That way, he won’t freak out thinking you’re trying to tie him down.

#13 Be a tease. Come on, girl, I know you have it in you. If you’re wondering how to keep a guy interested after sleeping with him, remember that it’s not all about sex, it’s about seduction. He can have sex with any girl, but can every girl seduce him? No. That’s where you come in. Flirt with him, tease him, talk dirty with him. Keep him stimulated and excited for more. His mind needs to be thinking of you all day long. [Read: Tease and denial – The secret key to hooking a man for good]

#14 Be yourself. I know this sounds lame, but while you’re doing all of these things, you need to be yourself. He’s not going to fall for you if you’re acting like someone you’re not. Don’t change yourself during this process. Let him see you for who you are, then he can decide if he likes it or not. If not, find a new guy. [Read: How to unfake your life and be yourself]

#15 Just go with the flow. Listen, this probably isn’t going to be the last guy you’re going to have sex with or think that you’re really into. So, just go with the flow. If he’s not interested in you and it’s clear, move on. There’s no point chasing after someone that isn’t meeting you halfway.

Now that you know how to keep a guy interested after sleeping with him, you’ll be able to use these tips to have him coming back for more.

PREVIOUSHow to Get Over a Crush on a Friend: 15 Steps to Stay Platonic
NEXTHow to End a Relationship on Good Terms Without Bitterness & Drama