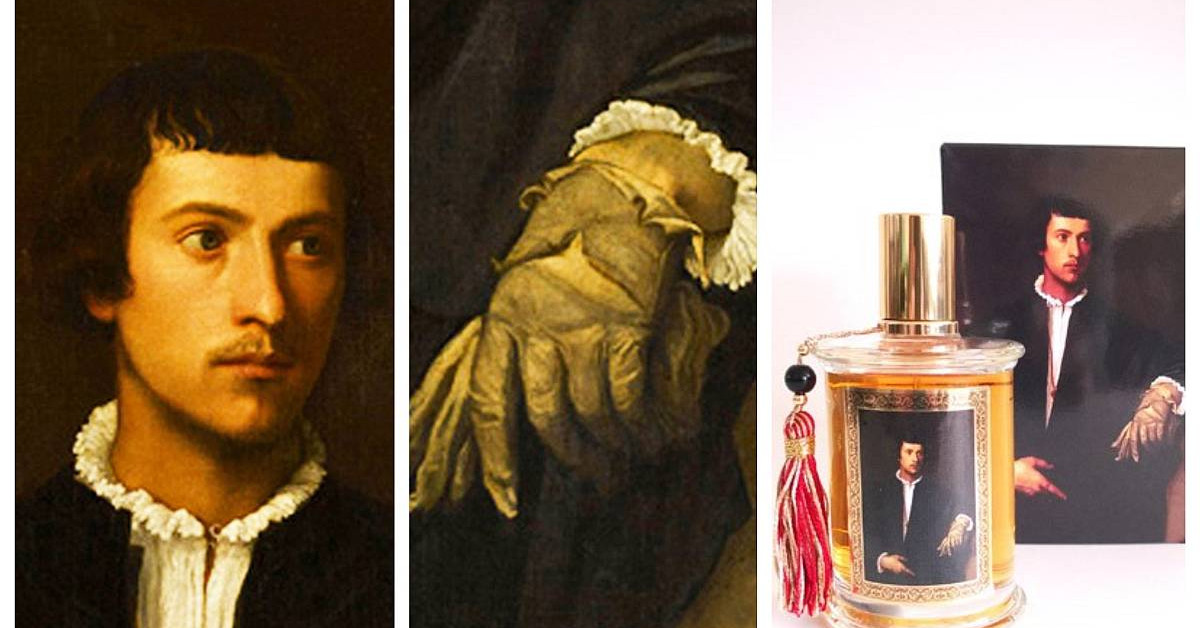 The new Parfums MDCI project has matured in the head of Claude Marchale, art director and owner of the Parisian brand. Tired of answering the question “What inspired you to create a fragrance?” he decided to provide an answer to it on the packaging and bottles of the fragrances.

So Mr. Marchale chose several famous paintings from museum collections, guided only by his own artistic taste, and invited several perfumers to create fragrances based on the emotions that they (the perfumers) feel in front of a certain canvas.

All four paintings show men, each with their own character and mood, in their own epoch, their surroundings and circumstances (Venice, the battlefield in Europe, France and Britain) but the vision of perfumers can be anything. Monsieur Marchale has already approved three out of the four perfumes, the fourth is still in the works, but it should be ready for the spring of 2019.

The first fragrance is dedicated to the Titian picture “A Man with a Glove” (c. 1520,) which belongs to the Louvre collection, and is located on the first floor, in the Mona Lisa Hall, right opposite this famous painting. 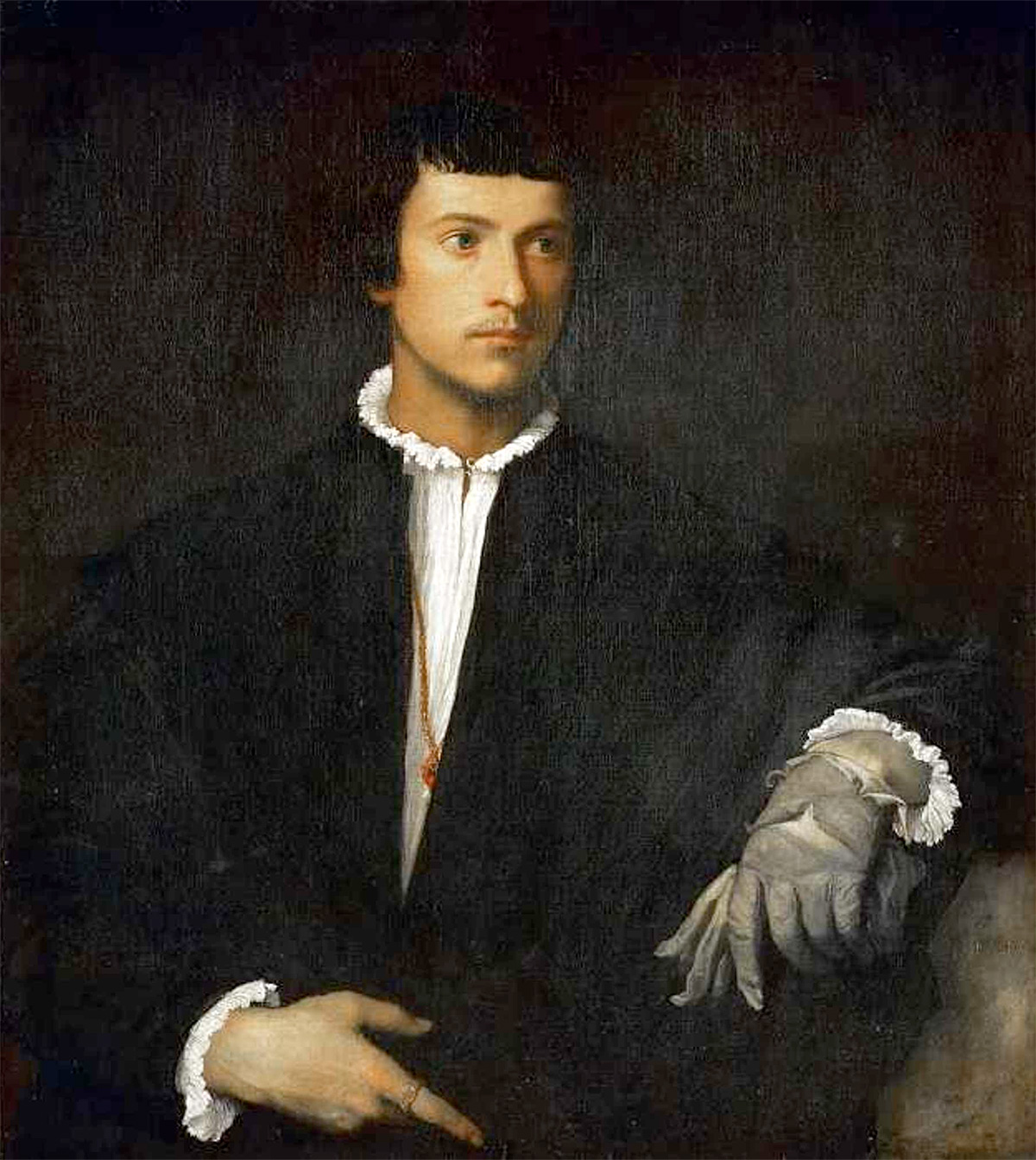 The fragrance name is L’Homme aux Gants, and it was created by Nathalie Feisthauer. She defined her creation as "soft oud," and we are not going to argue. 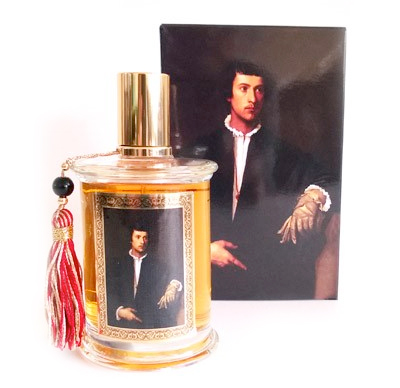 We will only supplement this definition with our sensations. So, the fragrance seemed to me a very delicate and creamy woody balsamic aroma, with a slightly alcohol-tinted fruity and spicy beginning. The main accord is soft, sweetish and creamy guaiac wood with the sweetness of vanilla tincture, benzoin and tonka beans.

The perfumer tried to convey the feeling of suede gloves without the help of a suede note, using only the general warmth and delicate texture of suede. The dark surroundings – nagarmotha, oud, patchouli – do not stand out in particular, except in a sweet woody accord that resembles the smell of smoke from oud wood burning over coals in a censer.

The second fragrance is dedicated to the picture of Théodore Géricault "The Officer of the Imperial Horse Guard Charging," or "Charging Chasseur," it is also from the collection of the Louvre Museum. 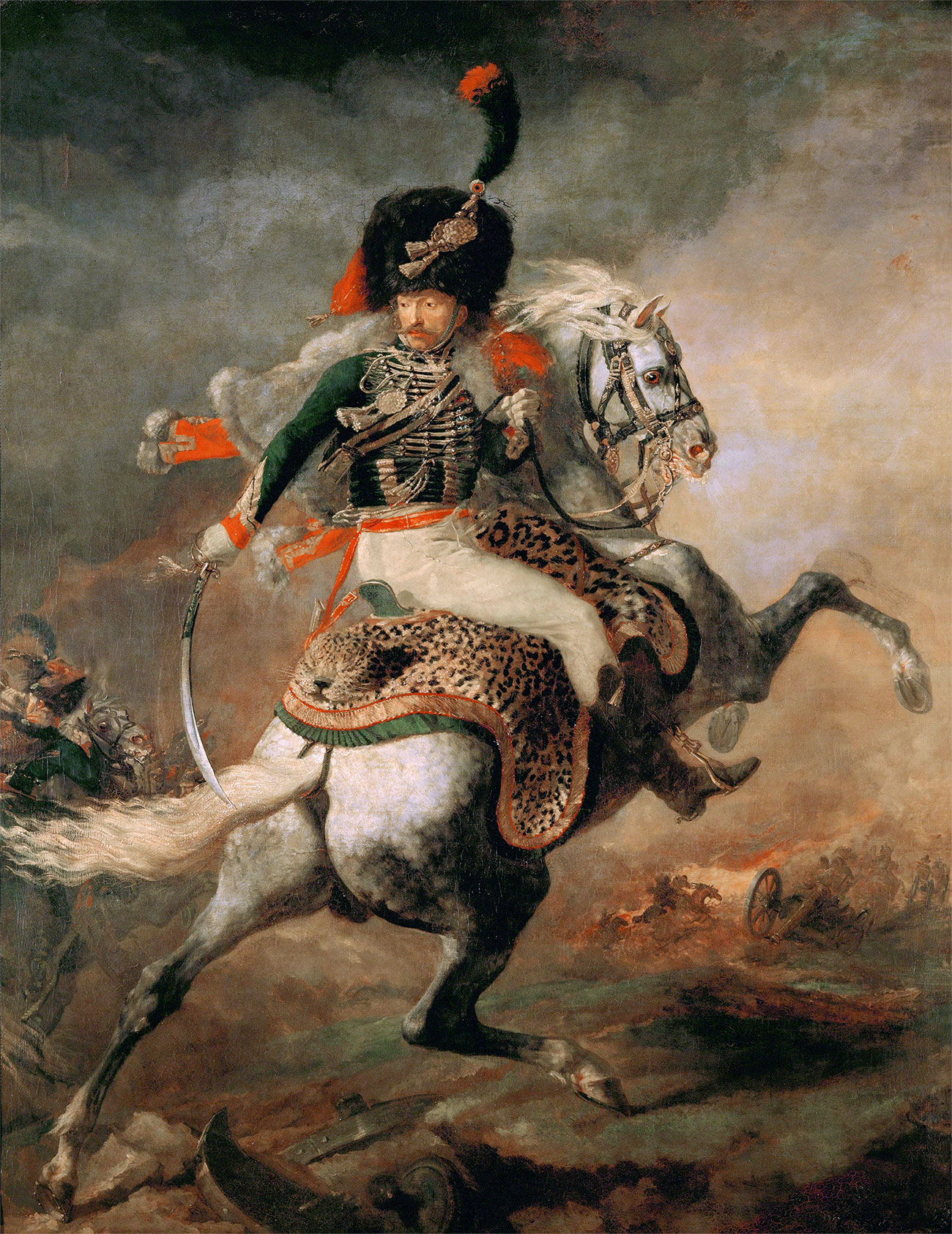 Exhibited for the first time at the Paris Art Salon in 1812, it was called "Portrait of Lieutenant M.D.," and this canvas reminds us of Napoleon's military successes in Europe. The fragrance is called Cuir Cavallier and it was also created by Nathalie Feisthauer.

What can be said about this fragrance? If you are waiting for a horse scent (dust from under the hooves and smoke of battles,) then there is nothing of this – only a brave military man, to whom everyone treats with great sympathy. He could not look back, but it is really a pleasure to follow such a sweet sillage. 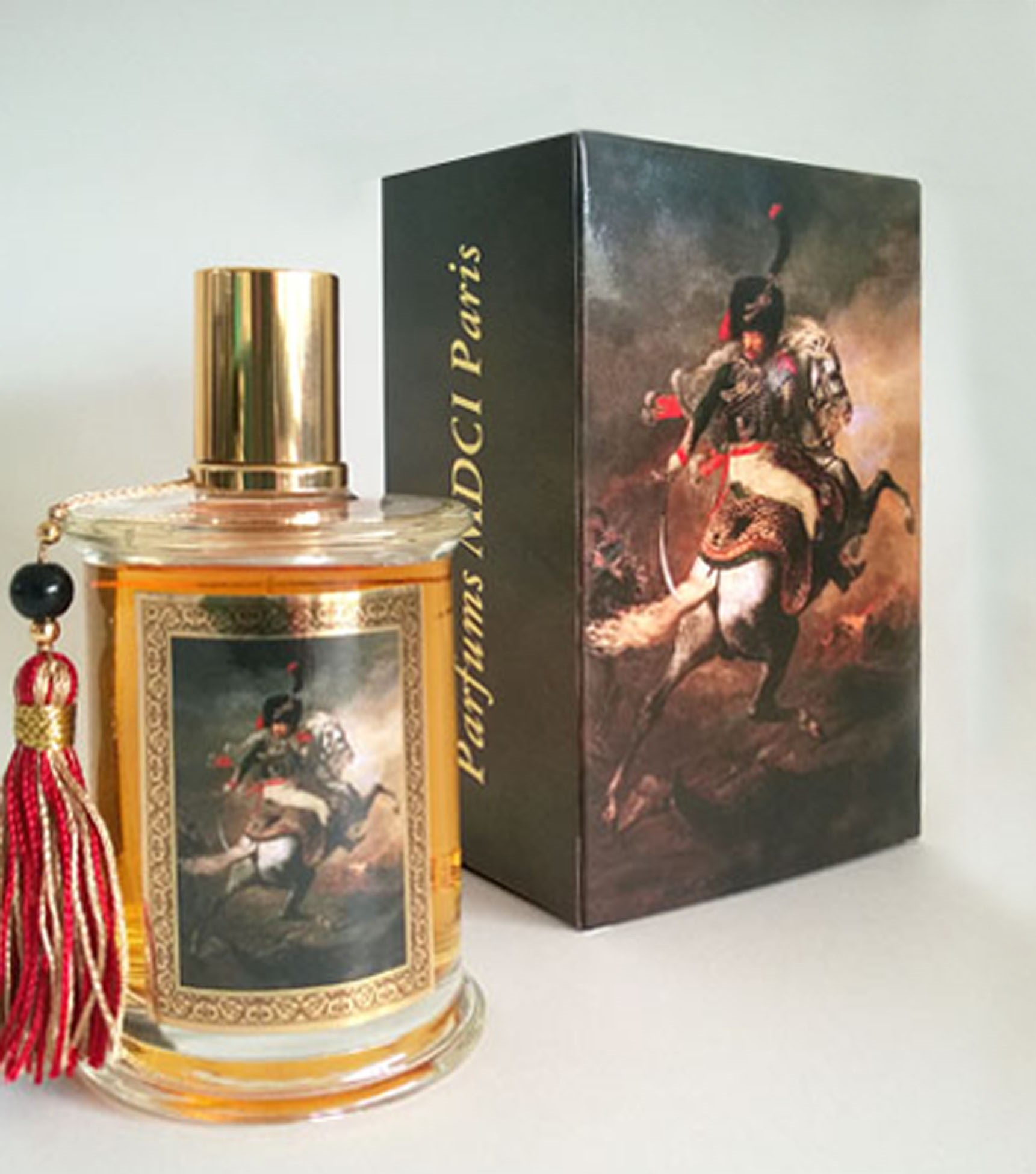 Cuir Cavallier is a juicy and bright perfume, with a sweet berry-fruity rose and saffron-leather bitterness of Safraleine. As the perfume develops, it becomes less and less berry-like, while the tart saffron part grows bigger – the fragrance darkens, becomes sharper, tobaccoish and earthy, and finally becomes a deep oriental leather. It's as if this brave Napoleon lieutenant was not going to the Russian military campaign, but to the Middle East.

The perfume has grandiose projection and size of the sillage is like the picture itself (two by three meters.) They both leave a vivid bright impression and would not fit very well in small spaces like an elevator or a small office.

The third fragrance is dedicated to “The Blue Boy,” arguably the best portrait by the British artist Thomas Gainsborough, created in 1770 and since 1928 located in the Huntington Library in California. 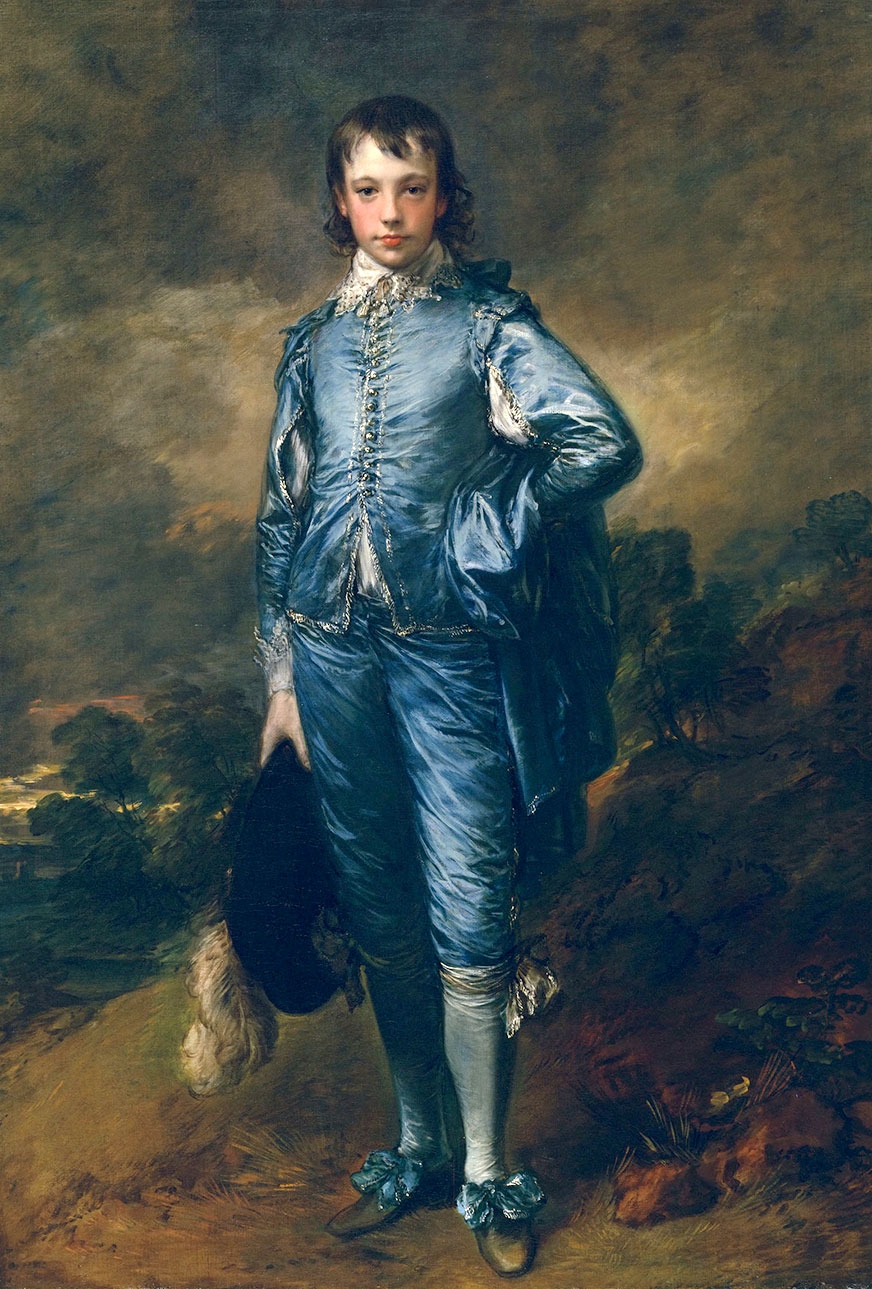 It was created by Cecile Zarokian, and it was named Blue Satin, as the legal rights for the name Blue Boy belong to a different company.

Pure radiance of the eternal citrus mind, with tropical fruit nuances, transparent sweet water and fresh aquatic greens… We have already smelled similar infinitely fresh fragrances, breaking from the precipice into the leathery-ambergris colored abyss – like many, Blue Satin follows in the Aventus Creed fairway, featuring a subtle saffron nuance and a touch of lacquered wood in a tart quinoline-leather base. It is an interesting interpretation of the mood of the painting, where a boy dressed in blue silk on a dark background is designed as a fresh radiating chord on a dark leathery background. 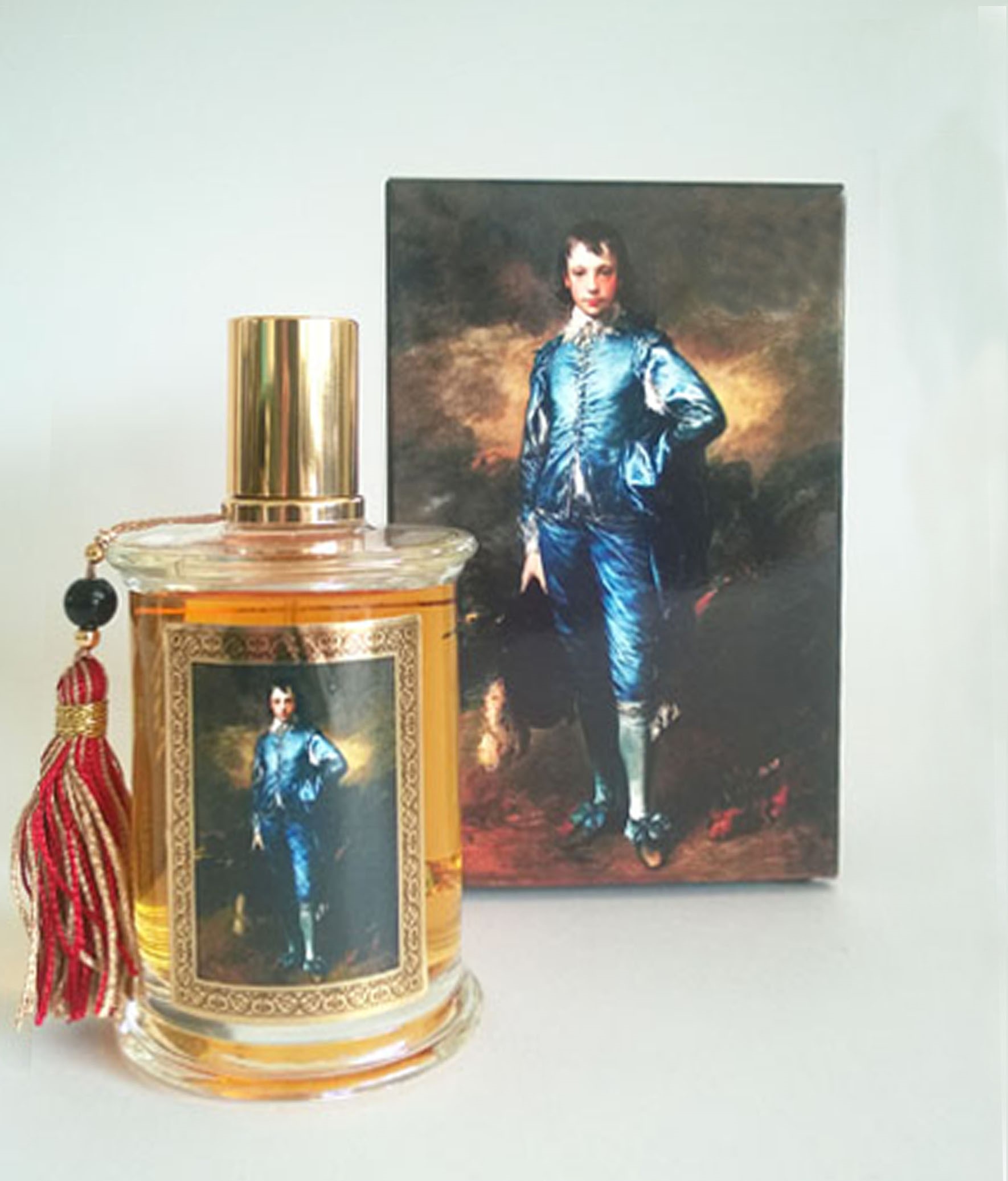 Reading the history of the painting and comparing it with the fragrance, I noticed another parallel – art historians believe that Thomas Gainsborough created this picture, imitating Anthony Van Dyck, depicting his blue boy wearing the same clothes (but in a different color) that Van Dyck depicted the young king Charles The Second. I wonder if Cecile Zarokian thought about this when creating the fragrance? 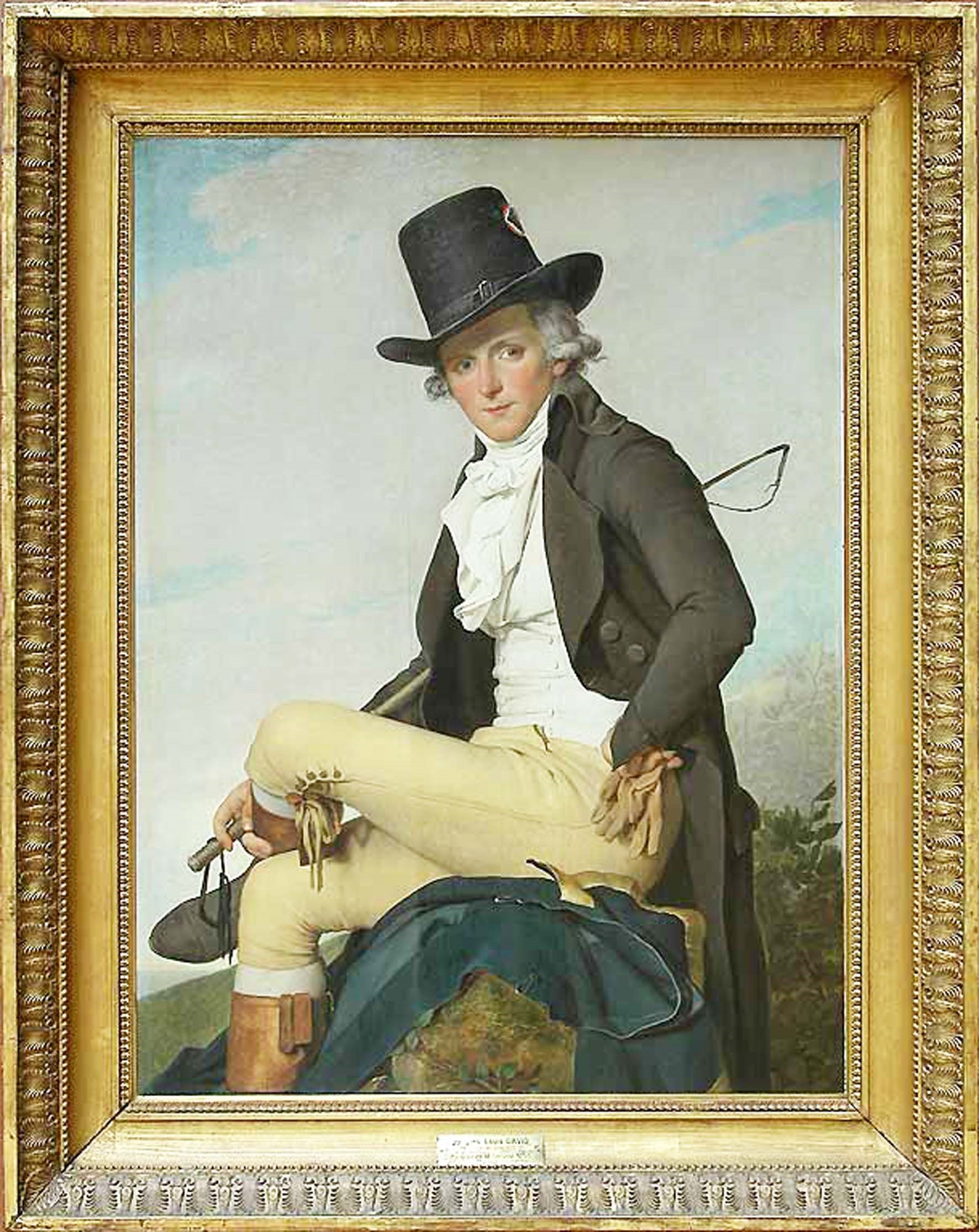 The fourth fragrance of Parfums MDCI is dedicated to the emotions of "The Portrait of Pierre Ceriziat" by Jacques Louis David from the collection of the Louvre. After being released from prison, David went to Brie together with his son-in-law Pierre and Pierre's wife Emilia, where the artist painted portraits of the Ceriziat couple in 1795.

The final decision about the fragrance formula has not yet been made; the project is still in the works, several perfumers are simultaneously engaged in its creation (hopefully, it will be completed this Spring.) Therefore, the name of the fragrance and the name of the perfumer is still unknown, and there is nothing to say about it.

Four men's portraits as a base for inspiration does not mean that the fragrances are created exclusively for men. Just as the scents of the next series, the basis for the creation of which will be women's portraits, will not necessarily become fragrances only for women. Claude Marchale said that he had begun shipping the first three fragrances to European distributors, the retail price of 75 ml MDCI standard bottles will be 225 euros.