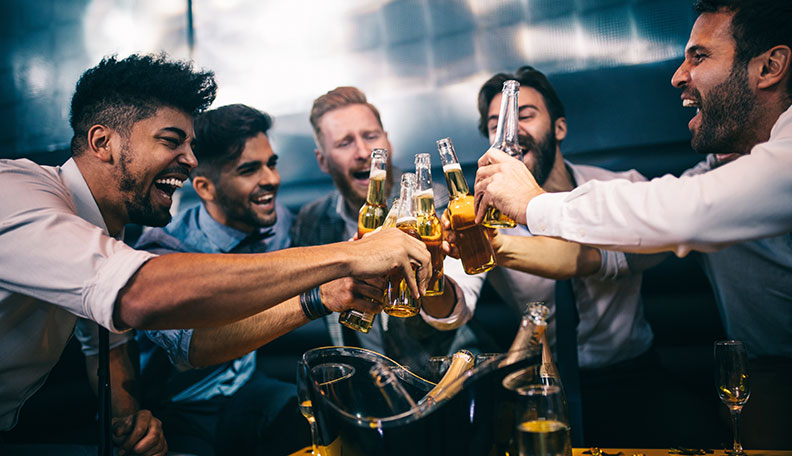 Have you ever stopped to think about how male bonding is different to the female version? Developing a bromance takes true time and effort!

Men bond very differently to women. Do you agree? Male bonding is certainly a mystery. It seems that men bond far easier than women do and have far less suspicion from the get-go.

What do you think?

Now let me be clear here, I’m going to be very general throughout this discussion. Every man is different, but from my experience, male bonding follows a regular pattern and is an interesting thing to explore!

Perhaps we could all learn a thing or two about bonding with other people from the way that men generally go about it.

What is male bonding?

First things first, what does the term ‘male bonding’ actually mean? Basically, male bonding is when two men become friends or work closely together. It’s a ‘getting to know you’ kind of ritual, and if you see two men who’ve never met suddenly in an animated conversation, they’re doing a spot of male bonding.

The relationship between males is quite unique. Again, I’m generalizing, but men bond based on shared experiences and interests. For instance, their favorite food, sporting team, or clothing brand.

However, women tend to bond based on a more emotional connection. It can be shared experiences but also how those experiences made them feel. In some cases, it’s not the same for every woman, but it can be a case of gossip. I’ll admit it, I’m a woman and I gossip – bad, I know.

None of this means that men don’t talk to their friends about their emotions, because they obviously do at some point, but it’s not something which is offered up in the same way as it may be within a group of women.

Male camaraderie is more about enjoying time together, talking, laughing, joking, and doing things that are fun. That is how the connection is formed and when you think about it, it’s a pretty good way to move forward.

While emotions are important, sometimes it can be exhausting have to talk about your feelings. Sometimes you just want to switch off, have a laugh, enjoy the moment with your friends and forget about the exhausting day you had, your worries, or the hurt you’re going through because of a friend or failed relationship. In that case, maybe male bonding has got it right here.

How do men bond?

Most men tend to bond about things they’ve both experienced and things they both like. It’s likely that two guys will simply sit down, be introduced, and start chatting. There doesn’t necessarily have to be a list of male bonding activities on offer.

It’s simply a “hi, how are you” type of situation and from there, one will ask a question about a sport, or what they do as a job, what they’re studying, what car they have, it can be anything. You can then expect the conversation to skyrocket and numbers will be exchanged within the hour.

It’s so easy for guys!

Female bonding and how it’s so different from the guys

I’ll share my experiences of female bonding so you can see the differences. Maybe it’s not been the same experience for you, but I’ve always found female bonding to be a rather terrifying deal. It’s almost like you’re on display for judgement, with the other one trying to figure you out. Is she after my man? Is she prettier than me? Why is she talking to me? It’s exhausting and borderline terrifying.

Have you had an experience like this before or is it just me? Of course, once you get past this psychic interrogation, life-long friendship can be born and from there, you have this ride or die situation which leaves you feeling supported until the end.

You can see the differences in how guys deal with difficulties in their friendships too. My partner had a minor disagreement with one of his life-long friends a few weeks ago.

He came home annoyed at something that had happened and words that had been said. It was pretty serious at the time, there was talk of never speaking again. However, the next day it was as though nothing had happened. I asked him what was going on, and he said that guys just don’t hang on to stuff like that.

Wow. I wish it could be the same in my friendships. When I have any kind of disagreement with a friend of mine, there’s silent treatment, passive aggressive texts, a kind of coming together, tears, and declarations of love before it’s all forgotten. It takes days, sometimes weeks!

Again, maybe male bonding and guys have this one covered better too.

The beauty of the bromance

When two men are pretty close, platonically so, they’re often referred to as having a bromance. It’s a tongue in cheek nod to how close they are. It’s also pretty cute to see. Guys might not be quite so emotional *generalizing again*, but they’re always there for their friends when they need to be.

Less gossip, overthinking, emotions, and competition. It’s a far easier route towards friendship. We could all learn a thing or two from the guys in our lives who are currently in the middle of an epic bromance.

Male bonding is geared towards fun, with an undertone of support. Of course, female bonding also has the same end result, but it seems that we must jump through several hoops to maintain it. Again, I find it exhausting.

Men, women and the friendships we choose

You could argue that this is why so many women choose to have close friendships with men instead of women. I have a close female friend who has a far greater number of male friends than female.

She says very categorically that this is because it’s easier. There’s less gossip and drama, and she knows that her male friends will always be honest with her, sometimes painfully so. In some ways, I agree with her.

Look at Joey and Phoebe in Friends, how many times did they fall out? Very few! It’s more of a ‘tell it like it is,’ ‘I’m here for you if you need me,’ ‘let’s just enjoy ourselves’ kind of deal and for me. It sounds pretty fantastic.

These male bonding ideas might sound really general, and trust me, I’ve mentioned it enough times to be totally aware of it, but it’s not something I’ve seen just once or twice. It seems to be a predominant pattern.

As a result, I assume that male bonding is just far easier than female bonding. Men seem to enjoy meeting other guys, they seem to enjoy the first flourishes of getting to know one another and bonding over the smallest thing.

For me, I dread meeting other girls for the first time because I’m not a big fan of small talk. I know how difficult it can be to get through that silent inquisition that’s going on in the other girl’s mind. Although, I will admit that some of my closest friendships came from those silent inquisitions!

Male bonding is a natural way for two guys to bond as friends. It happens quickly, easily, and when you compare it to female bonding, the differences are startling.

How to Prepare for Sex: 20 Things You MUST Do to Enjoy It Way More

Have you noticed his hand grazing yours recently? Your guy friend may be falling for…

Do you ever wonder if a guy thinks you’re hot? Well, here are all the…