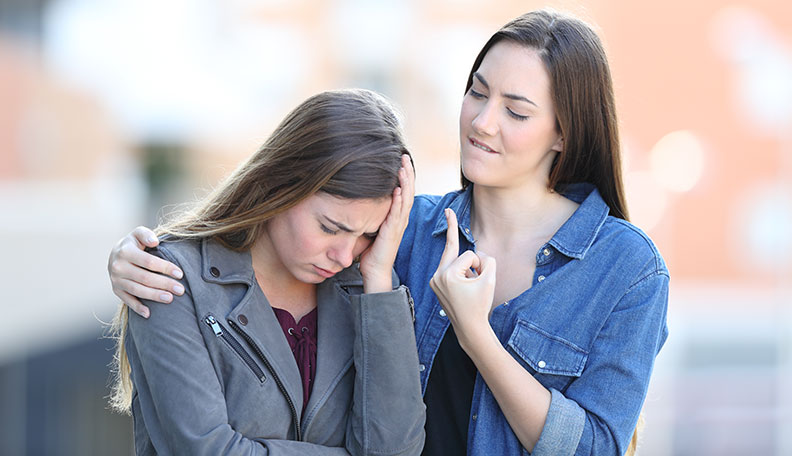 There are different categories of friends, so how do you know if you have a fake best friend or a genuine ‘ride or die’? These 10 signs tell the truth.

Do you want to know the thing that I find most worrying in the world? No, it’s not who’s going to win the next series of Love Island or whether or not we’re over Botox. It’s actually something far deeper. No, the thing I find worrying is that you never really know what someone’s true intentions are. Could I have a fake best friend just putting on a face?

You could meet someone, they could be utterly charming, you might connect with them instantly and feel like you’ve found your soulmate, but then they leave. No reason, no explanation, no nothing. They just disappear, poof! Gone, into thin air.

[Read: Ghosted by a best friend? How to find closure and heal your heart]

How do you cope with these things?

How do you cope with being betrayed by someone you trusted?

That’s what I find most worrying.

You might think I’m referring to a romantic situation here, and while that’s pretty damn painful in itself, I’m actually talking about friendships.

Hands up! Who has ever had a fake best friend?

No, I’m not talking about imaginary friends when you were younger. I’m talking about someone you thought had your back. Someone you adored on a friendship level, only for them to show their true colors and disappear from your life.

It’s happened to me more times than I can count. It leaves me wondering whether the world really is full of rather horrible people or I’m simply a very bad judge of character. For the sake of humankind, let’s hope it’s the latter.

[Read: Why friends ghost you and why it hurts so fiercely when they do]

10 crucial signs you have a fake best friend

I don’t want you to experience the same upset that I did when I realized that the person I had told all my secrets turned out to be a fake best friend. It was horrible, painful, gut-wrenching. Seriously, I think that losing a friend is actually harder than breaking up with someone romantically.

[Read: How to deal with selfish friends and recognize the ones that hurt you]

I came out of the whole situation far better than I went into it, having developed a greater sense of what to look for next time. That is the advice I’m going to impart upon you today.

So, if you’re not sure if you have a fake best friend in your midst or not, look out for these signs.

#1 They’re never available when you need them. I’m not suggesting that a real friend should always drop everything at a second’s notice. Arguably, most of the time they’re around for you when you need them. If there is someone in your life you call a friend but is never around when you need a shoulder to cry on, they’re probably in the fake category. [Read: How to stop being a doormat and allowing people to use you]

#3 They’re happy to talk about you behind your back. Do you have your suspicions that your so-called friend has been talking about you? Or, do you feel like if push came to shove, they wouldn’t have your back at all? That’s another sign that the person in your life isn’t genuine.

#4 You usually only hear from them on their terms. If they want something, they’re available to talk. If you want something, it’s hard to get hold of them. Does that sound familiar? Fake best friends are usually all about themselves, so if they want something from you, they’ll be all over you like a rash. [Read: Real friends vs fake friends – 13 ways to instantly tell them apart]

#5 You don’t feel free around them. Do you feel like you’re always tiptoeing around them? Do you often feel like you can’t be truly yourself for some reason whenever they’re around? That’s a pretty subliminal sign of a fake friend right there.

#6 They take everything negative out on you. While they might not blame you for all the misgivings going on in their life, they’ll probably take it out on you, leaving you as their metaphorical verbal punching bag. If that’s the case, why do you want them in your life? A friend is supposed to build you up, not knock you down.

#7 They never admit when they’re wrong. A true friend would be horrified if you sat them down and explained that they had hurt your feelings. A fake best friend would not be horrified. In this case, they’re likely to refuse to take responsibility. They may even lash out in a verbal rant. [Read: How to handle someone’s narcissistic rage when you confront them]

#8 They often put you down with negative remarks. Do they pull you down face to face? Do they tell you that you’re no good at something or that your clothes don’t look good for no reason? Sure, real friends need to be honest with one another. But, there’s honesty and there’s simply being mean.

#9 They’re never genuinely happy for you when things go well. If you succeed at something or have a tiny bit of happiness you want to share, your friend is never happy for you. Does that sound right? A true friend will celebrate your successes as your biggest cheerleader, a fake best friend will make you feel like you didn’t succeed at all. [Read: How to surround yourself with positive people and change your life]

#10 They never let you forget if you mess up. We all make mistakes sometimes. If you happen to mess up a little or maybe say something the wrong way, they’re not likely to let you forget it. A fake best friend is an expert at holding grudges. Let’s be honest, that’s not really what real friendship is about.

Real friendship is about celebrating one another, being each other’s rock, and standing up for the other one whenever they need a little help. It’s not about dragging someone down, making them feel bad about themselves, and it’s certainly not about selfishness. [Read: 15 signs of a bad friend to always be on the lookout for]

Sure, we’re all guilty of being a bad friend from time to time. We’re human. We mess up sometimes. However, if you recognize the signs in someone close to you, the chances of your friendship being real are slim.

Friendship is a precious thing in this day and age, and most of us lose more friends as we go through life than we gain. That’s fine however, as what you’re left with are the diamonds, the ones you can count on throughout life. Those are your true ride or dies, those are the ones you can rely upon to be there when things get tough. In return, you do the same for them. If any fakery comes into the equation, the chances of that friendship lasting the test of time are slim to zero anyway. [Read: 17 bad friends you should unfriend from your life]

I’m not going to lie and say it’s easy to say goodbye to someone you thought was your friend but turned out to be fake. I had to deal with it a few times. It made me question my own judgement. However, it’s always better to wave your hand goodbye to someone who causes you stress and upset, than to stick with it out of a fake vow of friendship.

[Read: What is a true friend? How to understand the characteristics of real friendship]

A fake best friend is someone who doesn’t have your best interests at heart. They are in the friendship for a reason only they know. Instead of building you up, they tear you down, causing stress and anguish.

You want to know how to break up with your girlfriend without hurting her,…