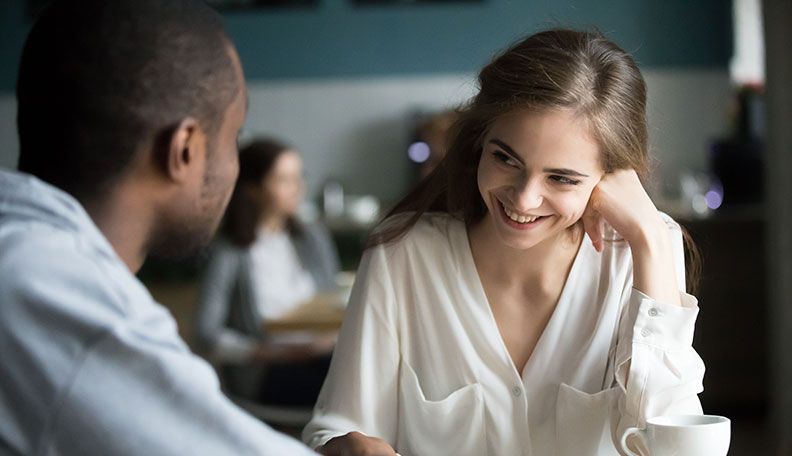 Meeting new people is hard, and it’s even harder when you like someone. If you want to know how to keep a conversation going with a guy, try these tips.

Talking to someone new isn’t always easy, especially when you have a crush on them. Figuring out how to keep a conversation going with a guy you are crushing on can feel overwhelming! You spend so much time trying to figure out what to say, if they like you, or want to see you in person.

How to keep a conversation going with a guy

I completely understand the nerves talking to someone new can bring up. If you’re talking to him via text, it’s a little easier in some ways.

Texting is a great tool to help you relax your nerves and get to know someone you just met. You don’t need to figure out what to say on a whim, and slowly process the small talk until you reach deeper topics.

[Read: A step-by-step guide for how to text your crush the right way]

On the other hand, in-person conversations are better because you see his facial expressions and jump from topic to topic as they come naturally.

So, it really depends on the situation you’re in. But, regardless of how you’re talking to this guy, whether it’s on the phone, face-to-face, or text message, you want to keep the conversation flowing naturally.

If there’s a natural click, you won’t need much help. But these tips will help give you the extra support you need. It’s time to get chatting.

#1 First, take a breath. Listen, this guy is a human being. He’s not above you or something special. He’s a guy, and you shouldn’t put him on a pedestal. I understand if you’re nervous to talk with him, but keep in mind that he’s no better than you; he’s your equal. So, take a deep breath and just chill out. [Read: How to stop feeling awkward around your crush and get their full attention]

#2 Do you like this guy? This is the question you need to ask yourself instead of just wondering how to keep a conversation going with a guy. Do you actually like this guy? Or is there another reason why you’re talking to him? Don’t feel that you need to waste your time on a guy you don’t really have feelings for you. If you like him, then go for it. If not, save yourself some time and move on. It’s harsh but true.

If not, you’re giving all of yourself to someone who doesn’t fully care. If he’s not engaging in conversation, meet someone who wants to talk with you. [Read: Is he shy or just not interested? 15 signs to decode his behavior]

#6 Show off your personality. This is your time to shine when you’re trying to figure out how to keep a conversation going with a guy. If you’re in a face-to-face conversation, great, it’ll be easier to show him who you are. If it’s on text, it can be hard for people to show their personality on text message. But you can crack jokes, use funny GIFs, and memes to show your personality off. This will give him a sense of who you are. [Read: 18 texting secrets to go from timid to text temptress]

#8 Don’t overanalyze the conversation. Do not make this mistake. Overanalyzing a conversation can destroy the flow because you’re too focused on the small, irrelevant details in a message. Go with the flow and your gut instinct on your reply. Overanalyzing will only drive you nuts.

#9 If you’re texting, don’t write an essay. If you’re going to write paragraphs and paragraphs of texts, you should know he’s probably not going to read them. Or maybe he will, but you won’t get an equally long reply. Your texts should be no longer than a couple of sentences to get your point across. That’ll keep the conversation light and fluid. [Read: Here’s what to do when a guy doesn’t text back]

#10 Share personal stories. If you want to take the conversation to the next level, you must create trust between one another. The only way to do that is to build a bond. Sharing personal stories that you’re comfortable sharing is a good start. Then he’ll reply with a story, and the conversation will go on. By opening yourself up, you’re letting him know you trust him.

#11 You don’t need to keep the conversation on text message. Oh, no, you don’t. Of course, in the beginning, you can text him, but after a while, why not send a voice message? Or better yet, why don’t you two talk on the phone or via FaceTime? Texting is fine, but after some time, it does get a little boring.

#12 Move the conversation to a real-life encounter. Do you really want to stay texting him for the rest of your life? Of course, you don’t. Your texts should eventually achieve some goal. Do you want to go on a date with him? After a while, why don’t you ask him out for a coffee? Take the power and put it in your hands. [Read: 15 moves to ask a guy out over text and get the answer you want]

#13 Is he interesting to talk to? Are you enjoying speaking with him? Because this is what really matters at the end of the day. If you’re enjoying the conversation and you see that he is as well, the conversation will flow naturally. But if it feels like you need to pull answers out of him every time you ask him a question, that’s a sign the conversation needs to end.

#14 Don’t second-guess what you want to say. If you want to say something, then say it. Don’t spend hours trying to figure out whether you should say what’s on your mind or not. He will take it however he’s going to take it. Of course, make sure what you’re saying won’t land you in jail. Other than that, say whatever is true to yourself. [Read: How to listen to your gut and give strength to your inner voice]

#15 Just relax! Seriously, relax. The conversation will continue to flow if there’s a natural connection between you. You also need to realize if it’s not a match, that’s okay. You can let this person go and meet someone who’s more compatible.

[Read: What it means to date someone in reality – not the fairy tale]

Understanding how to keep a conversation going with a guy isn’t actually as hard as you may think. What’s crucial is a natural connection between you. If you have that, it shouldn’t be a problem at all.