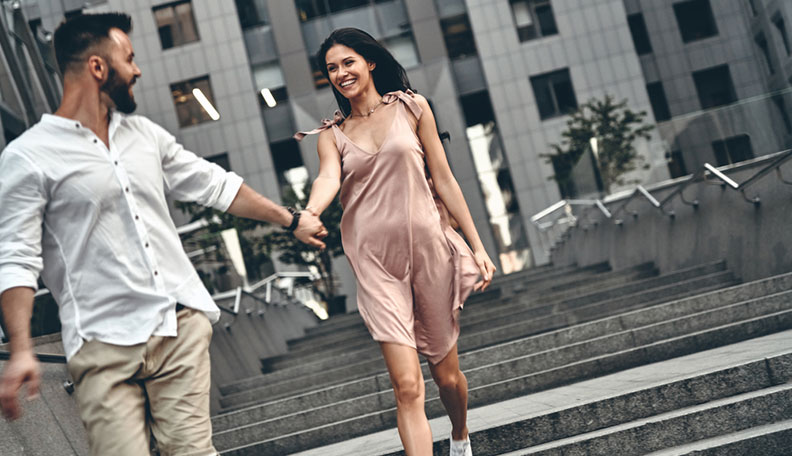 It isn’t always easy to learn how to get a guy to commit – especially if he’s a stubborn one. These tips will help you get and keep his loyalty card.

Some men like to play games a little too much. It might be fun for them to toy with our feelings – even if they do really like us – but it’s very annoying to us. We just want to know if they’re going to be with us for good. So knowing how to get a guy to commit in this type of situation will be extremely useful to you.

Guys just like to keep things up in the air at first. Even if he knows he likes you and you’re both obviously hitting it off, he still might hold back just to be safe. You may just need to give your man a few nudges to make him yours and yours only.

Forcing someone to commit is never the answer

If anything, doing that will only drive him away faster. You can’t give a guy an ultimatum. You’ll be extremely unhappy with his answer if you do. And even if he does commit under these circumstances, he’ll always feel some resentment toward you.

Not only that, but you’ll also carry around a form of insecurity. Would he have chosen you if you didn’t make him decide right then? You never want to start a relationship based on something so negative and forceful. [Read: 15 mistakes women make when she wants a guy to commit]

Truth be told, this isn’t very difficult if you’re both really into each other. That being said, some guys are a little scared of commitment and it helps when you give him more than enough reasons to make you his for good. Here’s how to do just that.

#1 Be 100% yourself. You really can’t trick a guy into liking you if you’re trying to be someone else. As much as we think guys aren’t as observant as women, they can still tell when you’re being fake. Don’t even try it because he’ll never want to be with someone when he doesn’t even know who you really are. [Read: 14 steps to be yourself and love every minute of it]

#2 Be fun. You know what makes a guy want to stick around? Having a lot of fun. Because what would be the point of wanting other girls if you’re giving him all the fun he could have elsewhere?

The truth is, guys are kind of like dogs. This isn’t in an offensive way, it just means that the more you want to have fun with him, the more he’ll like you. He’ll latch on to you if you’re always up to go do something exciting.

#3 Show him you’re committed. Why would he commit to you if he’s not even sure you’re into him that way? You really have to show guys that you’re in it for good, too. Otherwise, how will he know?

Guys are just as insecure as you are, especially if he really likes you. But if he knows that you’re going to commit and be exclusive to him, he’ll feel a lot better about doing the same. So make sure he knows how you feel. [Read: 15 sweet ways to tell a guy you like him and win him over]

#4 Be good to him. Why would a guy want to be with someone who treats them badly? You can’t demand a guy do stuff for you and then be upset when he doesn’t want to stay with you or commit.

That being said, if you treat him well and how you want to be treated, he’ll be much more likely to commit simply because he’s happy. When he sees how respectful and kind you are as a partner, he’ll want to stick around.

#5 Be grateful for the things he does for you. Nobody wants to commit to you if you never recognize the nice things they do. Would you? Probably not. You have to be actively thankful for the nice things he does for you when he does them. Not only does this show him you really care, but he’ll be more likely to repeat that behavior. [Read: 25 ways to make your guy feel appreciate and cared for]

#6 Always keep him guessing. This is in reference to what you do, not how you feel. Be spontaneous. If he never knows what you’ll do next – so long as it’s positive – he’ll want to stay about. It’s entertaining and fun. Plus, it provides a bit of a challenge and we all know how men are with challenges.

#7 Hold your own. This basically means to just stop being so sensitive. Know how to take a joke and when to laugh at yourself. It’s okay for a guy to pick on you and tease you. That means he likes you!

But if you’re always getting upset or unreasonably angry at his little pokes of fun, he won’t want to deal with that. So joke with him and give it right back. Hold your own and he’ll find you way more intriguing.

#8 Don’t change your opinion just because of him. You really have to have an opinion of your own. The most unattractive thing about a girl is when a guy asks her an opinion and she just agrees with him blindly.

It’s okay if you really do agree, but don’t feel the need to hide your opinion if it differs. You can easily be together and not agree on some things and it can even make your dynamic more interesting if you don’t. [Read: How to express your opinion without being snobby]

#9 Have meaningful discussions. As much as guys have a reputation for not caring deeply about many things, they really do. Something that’s very attractive is when a guy can have nice, deep conversation with a girl he likes. Don’t underestimate that when trying to get him to commit.

#10 Don’t put up with his BS. If you’re having trouble figuring out how to get a guy to commit, he also probably dishes a lot of bullshit that makes your relationship hard. Don’t put up with it and have some self-respect.

#11 Avoid nagging. The more you nag a guy about committing, the less likely it is that he’ll do it. Not only is it really annoying of you, but he’ll be more and more put off. When you nag, he only imagines you doing that for basically everything for the entirety of your relationship. He won’t want to be with someone like that. Lay off and follow these other tips to get him to commit. [Read: How to stop nagging and annoying your partner]

#12 Let him have his freedom. A lot of guys don’t want to commit out of fear of being tied down and not being able to do the stuff they did before. Show him that’s not the case. You each have to have your own life and by making sure he gets plenty of time with his friends, he won’t be scared to commit to you.

[Read: The 10 best-kept secrets to making a man commit to you]

When trying to get a man to pledge his loyalty, you have to give him what you’d want in return. That’s how you’ll figure out how to get a guy to commit. Treat him how you’d like to be treated.