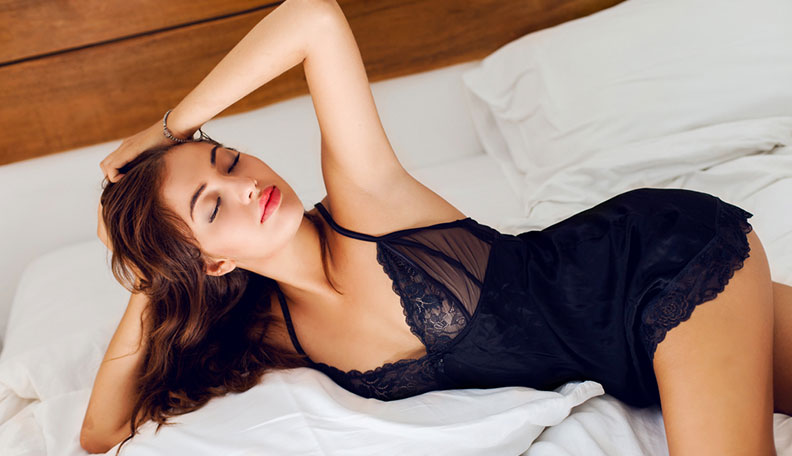 In the time of modern romance, nudes have become very common. If you’re wondering how to get a girl to send nudes, well, then keep reading.

Ah yes, the art of learning how to get a girl to send nudes. It’s a tricky subject. I’ve never been one who enjoyed the idea of sending naked pictures to men I don’t know, simply out of paranoia. Of course, when we’re talking about my partner, that’s a different story because I trust him.

But even then, if there’s a bad breakup, then what? I have no idea what’s going to happen to all those photos. But anyway, most people aren’t worried. Why?

Because almost everyone has sent a nude in their day. Nudes are like receiving a ‘good morning’ text message. People send nudes to each other like they’re emojis. [Read: The 10 ways to get sexy snapshots without asking]

But if you’re talking to someone new, sending nudes isn’t going to happen that fast. No way. Even though nudes are really common, people are still cautious when it comes to pressing send.

So, what does this mean for you? Well, the thing about nudes is that you can’t ask for them. That’s right. You should never ask for a nude. Nude photos are gifts. You need to be gifted a nude.

If you’re not gifted one, well, you’re out of luck. So, how you do receive such a gift? This is how to get a girl to send nudes. And no, it doesn’t start with a dick pic.

#1 Don’t ask. Like said earlier, you should never ask a girl for nude photos. First of all, women don’t like the idea of a man asking for a naked photo, it’s not attractive. There’s something sad about asking a woman for a nude photo. You’re more likely to receive one if you don’t ask for a nude. [Read: How to be a gentleman and win her over with your charm]

#2 Please, do NOT send a dick pic. Many men think that by sending a dick pic, they’ll receive an endless stream of nudes. But that’s not how it works. See, very few women actually enjoy receiving a dick pic from a man.

#3 Don’t jump straight into pics. If you want nude photos, build up the relationship with her. You can’t just message her for the first time asking for nudes, it’s not going to work. Instead, you need to genuinely talk to her, and see how it goes.

If she likes you, she’ll flirt with you, and allow the relationship to continue to develop. But if she doesn’t like you, don’t push it. [Read: How to slide into a girl’s DM and get a reply]

#5 Dirty talk is an art. If you’re texting, and things are going well, you can slowly add in dirty talk to see what happens. If she doesn’t like it, she’ll reject it, and that’s fine. Now you know where you stand. If she’s into it, you can continue to dirty talk and progress into full-on sexting. If sexting happens, nudes may happen as well. [Read: 20 dirty questions to ask a girl and make her really wet]

If she wants to send nudes, that works out well for you. If she doesn’t want to send you nudes, that’s also okay. At the end of the day, she doesn’t need to send you anything. [Read: The nine reasons why a girl might not like you]

#7 Understand your partner’s likes. The key to a healthy relationship is figuring out what your partner likes and dislikes. For example, maybe she has a foot fetish and enjoys taking selfies of her feet. But when it comes to nudes, she’s not into it. Everyone has their own comfort levels which you should respect.

#8 Don’t be vulgar. For someone to take a photo of their naked body and send it to another person, it takes a lot of courage. They’re really putting themselves out there. So, that being said, if you receive a nude, don’t be vulgar or rude. There’s a line between dirty talking and vulgarity. You should never make a woman feel objectified. It’s disgusting and shows a lack of respect. If this happens, you will never get anywhere with women. [Read: How to ask for nudes and receive a gallery of naked pictures]

#9 You need to show that you’re trustworthy. Why should you be the one to receive a nude photo? How does she know you’re trustworthy? Now, this is a good question to ask yourself. Before she hits send, she’s going to decide whether or not you’re someone she can trust. Show discretion and the type of person you are.

#10 Show your attraction to her. Don’t nag a woman into sending you a nude, she won’t do it. This isn’t something you can change her mind on. Instead, show your appreciation to her, and make her feel like she’s desired. If she’s attractive to you, let her know. You don’t need to lie or be fake, she’ll sniff it out. [Read: How to show a girl you like her without actually telling her]

#11 Show appreciation. If she does send you nude photos, be appreciative. This isn’t something small. It’s a big deal. She literally sent you a photo of her naked body. If you act cold afterward, well, don’t ever expect her to send you a nude photo again. You just squashed her ego, and that isn’t a smart move on your part.

[Read: The 15 effortless and small gestures that girls always notice and appreciate]

Understanding how to get a girl to send nudes isn’t that easy. But follow these tips and it shouldn’t be too hard. At the end of the day, as long as there’s a connection and you’re respectful, she’ll send you nudes.