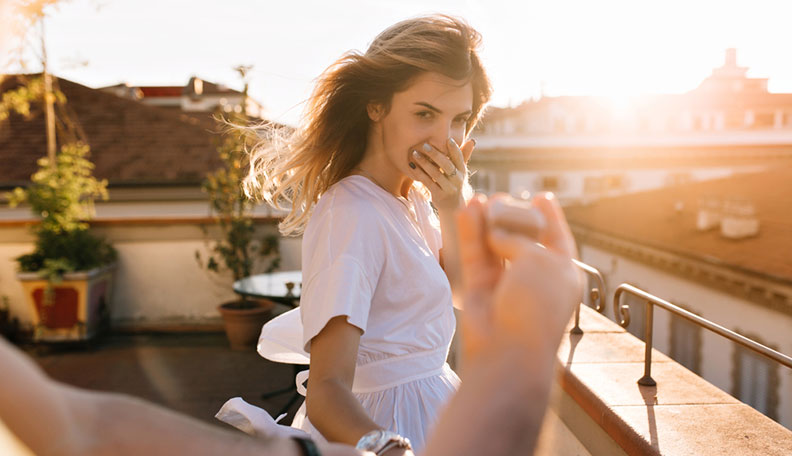 It’s hard to know what to spend when it comes to something as important as an engagements ring. So how much should you spend on an engagement ring?

Nowadays, engagement rings are a big deal. But how much should you spend on an engagement ring? And does it really matter? More and more, men are asking themselves these questions. They aren’t sure what will be enough and how they’ll make their women happy.

It can be really frustrating. You know you want to marry this woman but you don’t know how much you should spend to make sure she’s happy with her ring. The last thing you want is to have her disappointed in the ring.

She’s going to wear that ring for a lifetime

In all seriousness, this ring is a big deal – not because of how expensive it is, but because she’ll wear it forever. That’s the idea with marriage, anyway. It’ll be on that left finger of hers forever and for that reason, it has to be something she loves.

That kind of pressure can make a guy go a little crazy. On top of worrying about if she’ll even say yes, you also have to worry about if she’ll like the ring. Because in today’s society, that ring is becoming more and more of a token of status. [Read: 25 reasons to put a ring on it]

How much should you spend on an engagement ring?

If you truly want your girl to be happy, you have to put a little bit of savings into the investment of a ring she’ll wear forever. But that’s not the only thing you should concern yourself with when it comes to making her happy.

So how much should you spend on an engagement ring, anyway? The rule of thumb that has been used for a very long time is to spend two month’s salary on it. So if you make $2,000 a month, you should get a ring that’s $4,000. [Read: The 8 best romantic proposal ideas]

But does that rule really apply all the time?

No. Here are a few other things you should take into consideration when choosing a ring for that special someone. Believe it or not, the price point isn’t the most important part.

#1 It’s what she likes. You don’t have to spend a fortune on a ring if that’s not her style. Some girls prefer simple and dainty over something extravagant. Those rings will cost a lot less money. That means you won’t have to be spending 2 months pay on a ring.

You just want to make sure it’s something she really enjoys and will love. Don’t think that you have to go overboard just because that’s what society is telling you to. If she won’t love it, don’t buy it. [Confession – He popped the question with a horrendous ring!]

#2 It fits her lifestyle. This is something not a whole lot of guys think about when choosing a ring, but they need to. What does your girl do for a living? Is it something she can realistically do with a giant rock on her finger?

More often than not, girls like the idea of a big ring more than they’d actually like the ring itself. You have to figure out if her job and lifestyle fits having a larger, more expensive ring as opposed to something smaller and easily manageable.

#3 It has a deeper meaning. This is where your grandmother’s or your mother’s ring comes into play. If it’s a meaningful ring, the price obviously doesn’t come into play. It’s more about how special it is and if it’s also something she’ll like.

If you want to use a meaningful ring but don’t think she’ll like the band material or something, you can always have the metal melted down and reshaped along with the having the stone taken out and placed in a different set. It still holds meaning, but also ensure she’ll love it. [Read: How to find meaning when you feel like life is meaningless]

#4 Don’t pick something just because it’s trendy. This is a huge mistake. Going about choosing the ring by yourself isn’t a good idea because if you research engagement rings, you’ll probably come face to face with a bunch of trendy rings. Trends change, the ring she’s wearing won’t.

#5 Don’t spend more than you can on it. Your girl knows how much you make by now. Getting her something over the top and outlandish will only make her feel a little guilty if she knows you can’t really afford it.

Plus, you also have a wedding to pay for soon. There’s no need to put yourself in debt in order to pay for a ring. You can always gift her a new ring down the road once you’re making a bit more as an anniversary gift.

#6 Think about quality. Once again, this is a ring she’ll have forever. FOREVER. That means you can’t just get something that’s not a very long-lasting metal or from a jeweler who isn’t top-notch. Quality is of the utmost importance with something she’s going to have on her hand for the rest of her life. [Read: 18 undeniable signs that you’ve found the one]

#7 Remember the wedding band. She’ll also have to wear a band with the engagement ring, so make sure it’s one that’ll go with another. Meaning, don’t get a ring that has such a big diamond and other embellishments that it’ll be clunky when you add the band.

This is something not many people think of in general so be aware of it. Oftentimes, jewelers will show you the engagement ring with a band so you can picture the whole ensemble together.

#8 Do some research. Don’t just order the ring online or go in to whichever jewelry store happens to be closest to the mall entrance. You should actually do your research because there are places that charge far too much for a ring.

On the flip side, there are also places that charge way too little because their ring qualities are garbage. Look at reviews and actually read through them. Determine the top two or three places and check them all out and compare. [Read: 13 things you need in order to get engaged]

#9 Look at non-diamond rings, too. Diamonds are the traditional stone in an engagement ring, but it’s not the only option you have. There are people who would rather have something else. I know someone with a ruby engagement ring who never wanted a diamond.

There are so many different stones and gems that can be used for engagement rings and some of them are on the cheaper side. Talk to your girl and see which she likes best. You never know. She may be the type to not want a diamond at all.

#10 Like it yourself. If you feel good about the ring and know it’s the type your girl will love, then that’s the ring to get. It doesn’t matter how much you spend on it so long as you like it. What’s important is that you’re getting married. The ring is just a token of that.

[Read: 9 reasons you shouldn’t worry if you’re the last to get married]

So how much should you spend on an engagement ring? The truth is that it doesn’t truly matter. Spend what you can, but think of what’ll really make your woman happy and what she likes best.