Until recently, if you’d asked me if I ever wanted to make falafel at home, I’d have said “sure, one day” but what I meant was “nah, why bother?” I was certain that falafel was fussy to make and had a long ingredient list. It probably related in some way to a fritter, meaning that it was bound with eggs and flour, and probably had breading on it too, all pesky steps and this is even before you get to the peskiest of all: deep-frying them. I figured that it’s one of these things that there as many recipes for as there are people who make it, thus whatever I came up with would be wrong by default – too firm or too soft, with chickpeas instead of favas or vice-versa — no matter what. But this isn’t the whole truth. The fact is that below 14th Street, there are two locations each of Taim and Mamoun’s every time I even distantly considered whether I needed a homemade falafel recipe in my life, I knew I could get a perfectly executed sandwich in my hands before I even wrote out a grocery list. 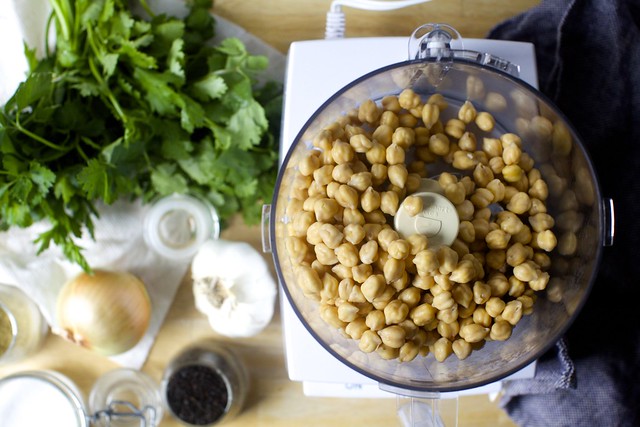 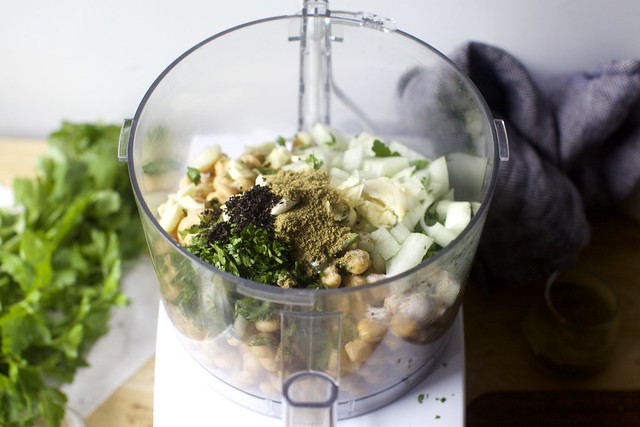 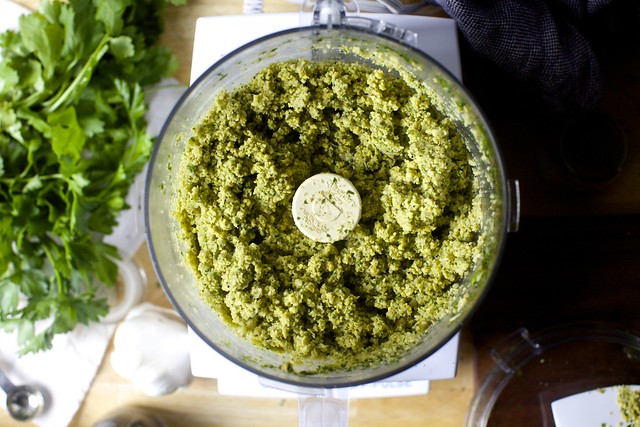 Hey, I’m not proud of this. I pride myself on being a curious person in the realm of cooking so it’s pretty pathetic that I had falafel all worked up in my head as this highly complex thing and never once, you know, read a few recipes. Had I, I’d have learned many extremely cool things about falafel such as the fact that while you do need to start with dried chickpeas (come back!), you don’t even have to cook them, or not in the classic long-simmered way, to make it. You soak them overnight in cold water, grind them up with seasonings and herbs, pack them into spoonfuls, fry them in less than an inch of oil in merely a few minutes, and that is it. There’s no egg. There’s no breading. It’s vegan, it’s gluten-free, it’s dirt cheap, and it’s easy, I mean criminally easy, to make. And I had to do it immediately. 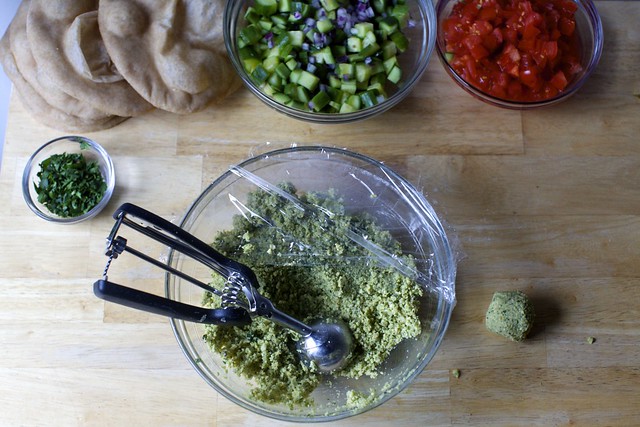 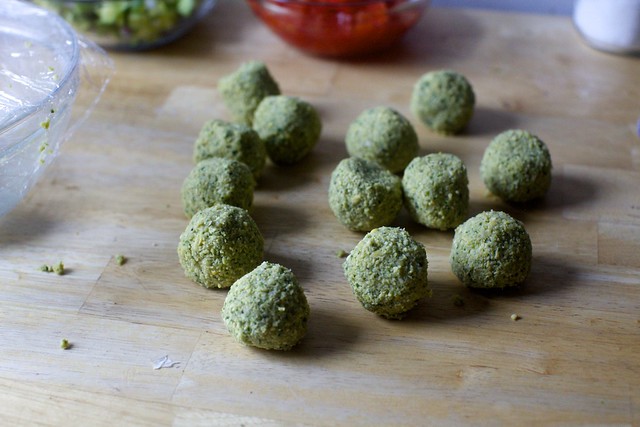 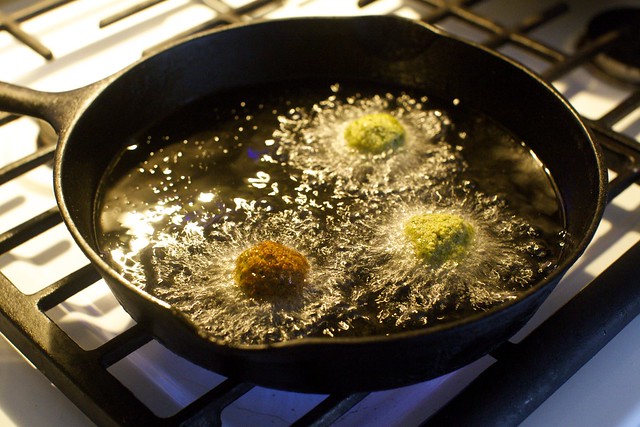 In real life, however, I waited until the first night of Hanukah for two reasons, one, fried food is basically the only rule of the holiday, and two, a family member has recently gone vegan and I weirdly love the challenge of trying new menus (obviously, the meal ended with this cake). Making falafel for 10 people was so easy, I had spare time to kill and so I decided to make pita bread too. Okay, I’m a little nuts but the fact is that 90% of storebought pita is dry and terrible and even the worst homemade pita, the couple that refuse to puff or puff erratically, as you see here, is still delicious. 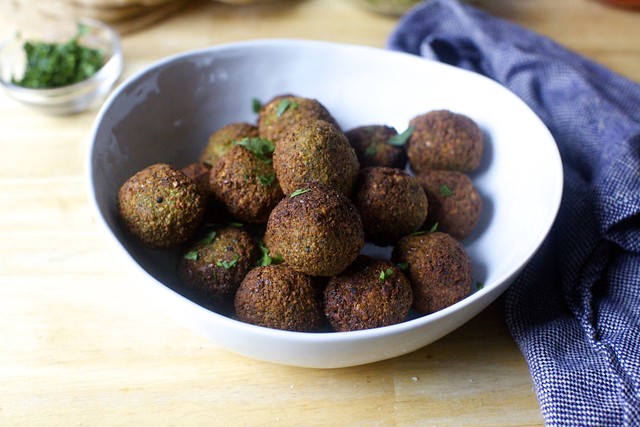 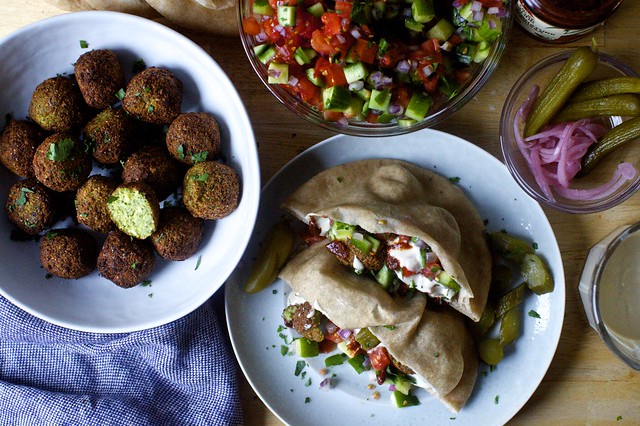 And for the other side of the world:
Six Months Ago: Linguine and Clams
1.5 Years Ago: Grilled Pepper and Torn Mozarella Panzanella and Crispy Spiced Lamb and Lentils
2.5 Years Ago: The Consummate Chocolate Chip Cookie, Revisited, Charred Eggplant and Walnut Pesto Pasta Salad, and Strawberry Milk
3.5 Years Ago: Crispy Frizzled Artichokes and Saltine Crack Ice Cream Sandwiches
4.5 Years Ago: Coconut Brown Butter Cookies and Pasta and Fried Zucchini Salad

I know many of us dread frying foods but for whatever it’s worth, making falafel involves none of the headaches that other fried foods do. You don’t need a lot of oil (3/4″ depth is fine.) You don’t need to stress over anything burning on the outside while still being unsafe to eat (fried chicken, I’m looking at you) in the middle. You don’t need to use an entire roll of paper towels and every counter in your home to drain the falafel because they weirdly don’t pick up much oil at all. In fact, I measured the oil I used before and after making falafel and found that each ball picked a scant half-teaspoon of oil. You put 3 to 4 in a pita. They are shockingly unheavy and ungreasy.

This makes 19 pieces of falafel about 1.5 inches in diameter, using a 1.5 tablespoon cookie scoop to measure. I estimate 3 to 4 for each medium-large pita sandwich portion, to make 4 to 6 total, but we preferred only 3 in each. This recipe scales easily; I’d recommend doubling it for a crowd or even just to stock your freezer for a future falafel night.

The night before: Place chickpeas in a large bowl and add enough water to cover them by a few inches. I like to put 1 tablespoon of kosher salt per pound of chickpeas in this water too; it will not toughen the beans or slow down their cooking time, it simply seasons them. Let the chickpeas soak overnight.

An hour or so before you’d like to eat falafel: Drain the chickpeas well. In the bowl of a food processor or a really strong blender, place the onion, garlic, and herbs and pulse the machine until they’re coarsely. Add the drained chickpeas, salt, and spices and process until blended to a fine chop but not pureed. You’re looking for a texture like cooked couscous plus some slightly larger bits throughout. You should be able to pinch it together into a shape that holds.

Transfer chickpea mixture to a bowl, cover with plastic, and place in refrigerator for a few hours, if you have it, but I find even 30 minutes is helpful in getting the mixture to thicken and hold shape better. [This is when I like to get everything else ready.]

To shape the falafel: Form the chickpea mixture into walnut-sized balls. You could use a falafel scoop, if you have one, tablespoon measuring spoon, or even a cookie scoop, as I did. The most important thing is that you press it into the scoop tightly to compress the ingredients, then gently roll it in the palm of your hands to form a ball. Repeat with remaining chickpea mixture. (If you’re like me, you imagine you can just do this as you add them to the pan, but they cook so quickly, you’ll be happy to not have to multitask. Trust me.)

To cook the falafel: Heat 3/4 to 1-inch of oil in a medium-large frying pan to 375°F. Fry about 6 falafel fritters at a time, turning them over once they’re a nice toasty brown underneath, and removing them once the second half has the same color. This took me about 3 minutes per batch. Drain on paper towels and repeat with remaining fritters.

[Don’t have a thermometer? Well, 375 is very, very hot. It takes my frying pan of oil on high heat about 5 minutes to reach this temperature. You can also test a small ball; if it cooks in about 3 minutes, it’s probably about the right temperature.]

To serve: I like to split open a pita and start with a little tahini sauce (below) and a spoonful of salad at the bottom before adding 3 to 4 falafel fritters. Stuff and finish with a more generous scoop of tomato-cucumber salad, more tahini sauce, a hot sauce of your choice, and pickles, if you wish. 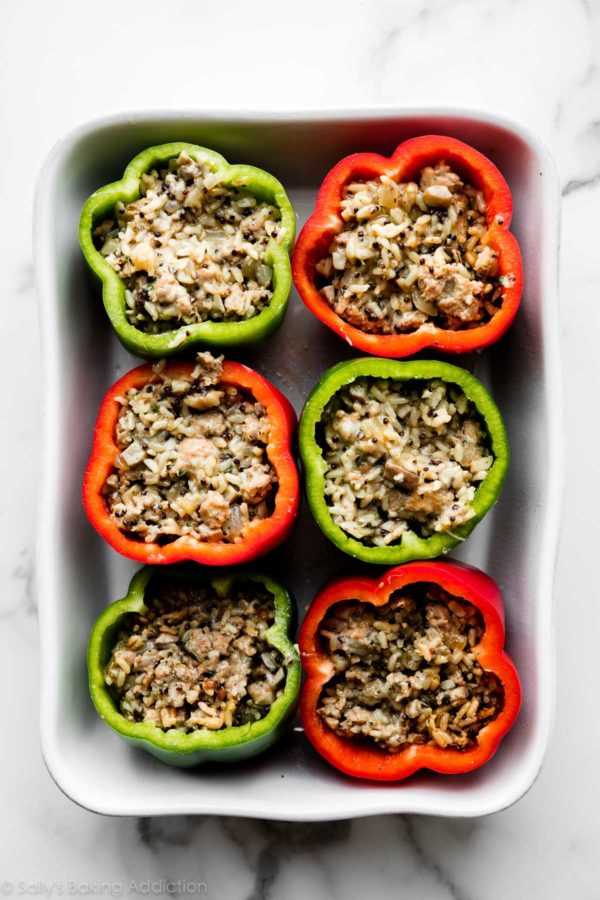 These sausage stuffed peppers are a fun and satisfying twist on the traditional beef version. The filling includes a handful... read more 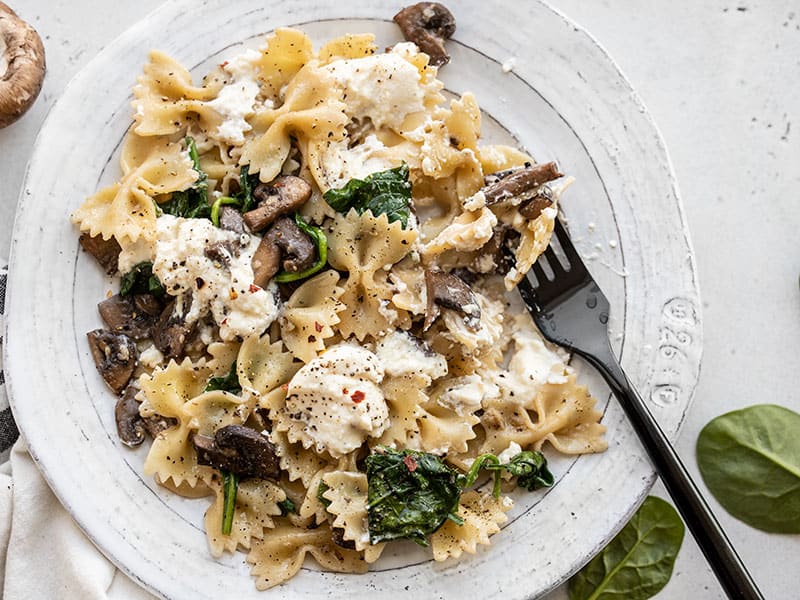 Mushroom and Spinach Pasta with Ricotta 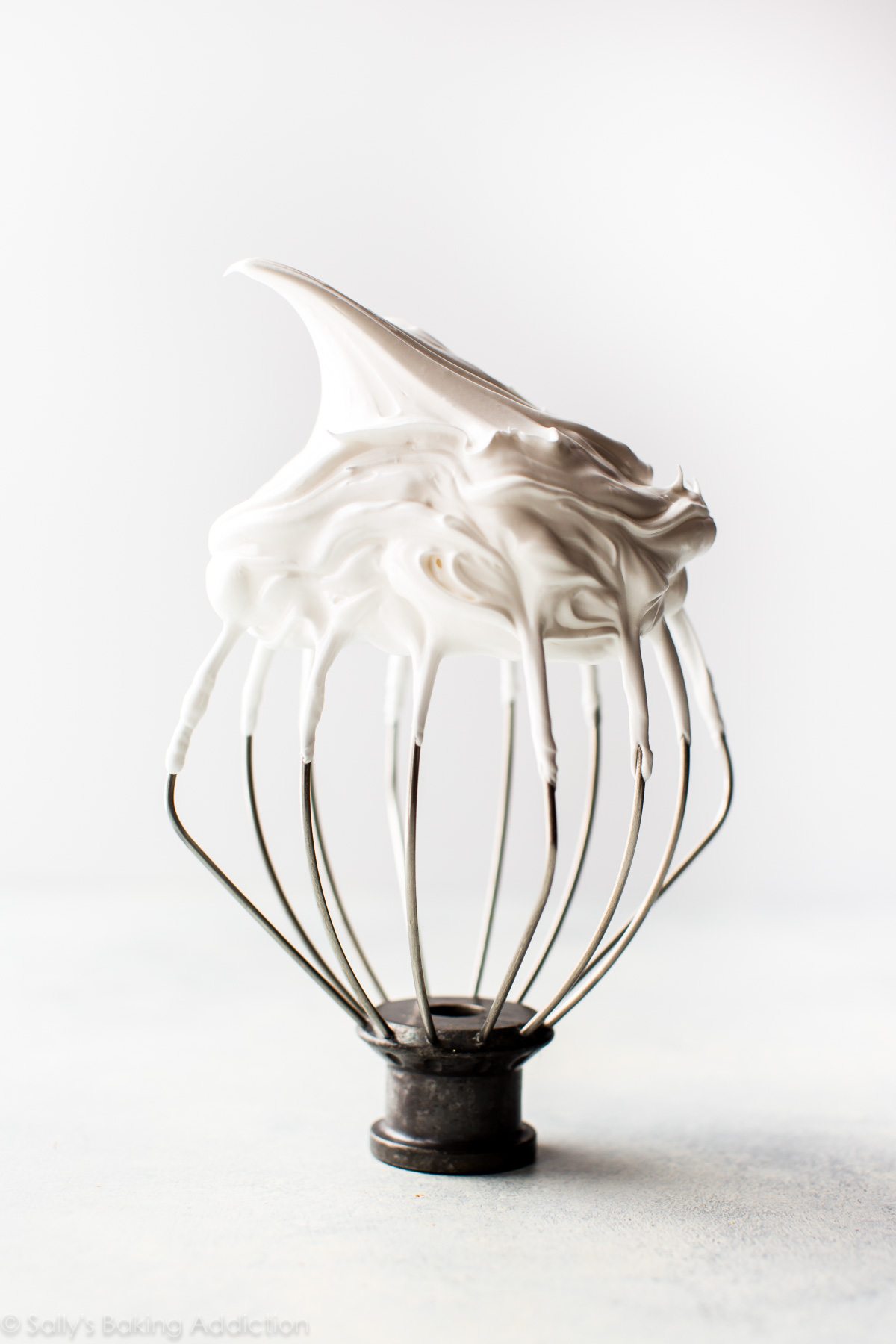 45 Healthier Recipes for the New Year

corn salad with chile and lime

For July 4th, we hosted a dozen people (no, we don’t have space for this but why learn now) and... read more 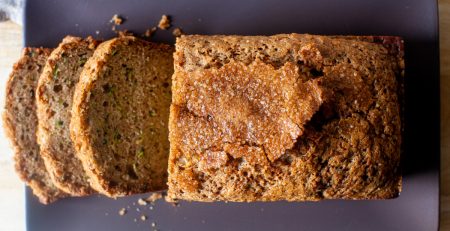 I have a few complaints about zucchini bread and I bet you cannot wait to hear them. I bet you... read more