This past Saturday, we hosted our second Friendsgiving, stuffing 17 people in an apartment that has no business holding 17 people, but it’s okay, there’s wine for that. Our first one was in 2016; you can read about it here. I took 2017 off because I was a teensy bit busy book touring for Smitten Kitchen Every Day** It was fun to be back. 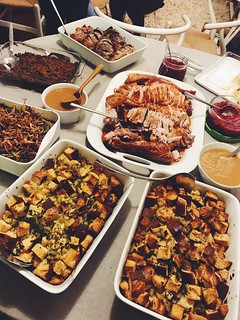 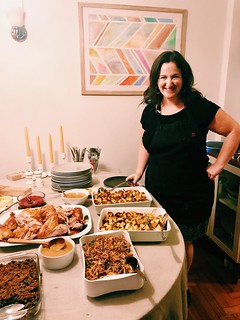 When having friends over, I like to get everything done that I can in advance and I do this for completely selfish reasons: I want to enjoy my party, too, and I can’t if I’m scrambling around all day and am bone tired by the time food comes out. But last week was abnormally busy and I only got to grocery shopping on Thursday, only to discover that one week before Thanksgiving, it’s like tumbleweeds, the lull before the weekend stampede, all past-prime rosemary and other sadness. I almost cancelled but my husband miraculously found almost everything that evening, and instead I did a very beautiful, highly recommended thing: I nixed a few things on the planned menu and swapped more complicated ones for simpler recipes with shorter ingredient lists but high reward. Here’s the menu, a few details, and completely random tips:

* Herb and garlic baked camembert: This is in Smitten Kitchen Every Day and there will never be an SK party without it. In fact, it’s gotten so popular that my friends and family make it now too, so I outsourced it. My SIL brought three, we heated them here. It was so nice to have one less thing to do.

* Bacon-wrapped dates: No recipe, but there are a gazillion on the web. I don’t stuff them (I did it once and it was way too pesky, especially given that they’re good without stuffing) and no dip. We made a ton and they were gone quickly; my daughter called them “bacon candy.” 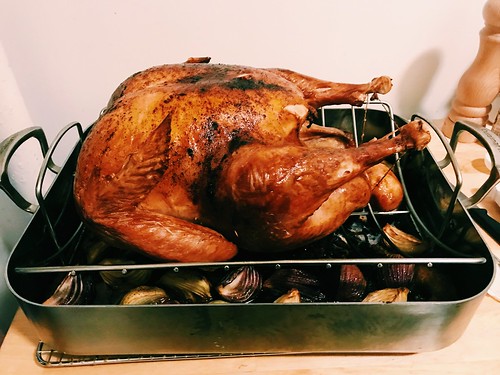 * Turkey: In 2016, I did a hybrid wet brine from a bunch of sources. It was delicious but not worth the logistical nightmare. And mopping. This year, I made The Judy Bird, a Thanksgiving application of Zuni Cafe’s famous roast chicken. There are many dry brine recipes out there but this was the simplest and why make something more complicated unless you know it’s necessary? Based on the turkey reviews, I don’t think it needs anything else. My changes are that I baste it with a melted 1/2 cup of butter, and then when I’m out of butter, the pan juices, and this year, I put quartered red and yellow onion wedges in the bottom of the pan (tossed with a little oil, salt, and pepper) and friends, they were glorious after getting caramelized and lightly charred in turkey-butter drippings for a few hours. Here’s a logistical tip I don’t think enough recipes make clear: You want to rest your turkey for 20 to 30 minutes before carving it, tented lightly with foil. It’s then going to take 15 minutes to carve (I had a friend holding a YouTube video tutorial in front of me because I’m very bad at it.) This gives you 30 to 45 minutes of empty oven time where you can reheat sides, which is more than most need. I have a single, not big, not great oven and it was all I needed. [I mean, needs being relative, just in case Nancy Meyers is out there and wants to lend me a set kitchen and the life that goes with it next time.] 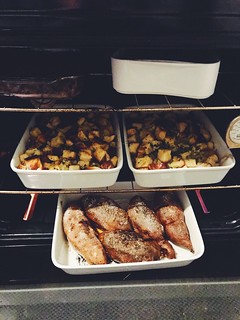 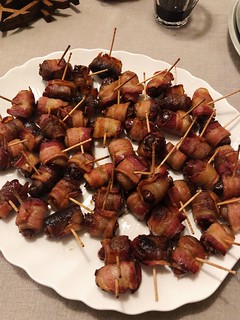 * Gravy: I really ought to write up a recipe one day, huh, but I use a basic formula of 1/2 cup butter, 3/4 cup flour, 8 cups chicken or turkey stock, a splash of dry marsala or sherry to deglaze the pan, and a lot of salt and pepper. (You cook this the way you would a bechamel.) When your turkey is done, if you want to separate the drippings, you can replace any of that butter with fat and any of that broth with juices. Or you can skip it! The gravy will have a less nuanced turkey flavor, but it’s still pretty awesome, especially if you have homemade stock. (In a freak bit of luck, I discovered two quarts of this in the freezer from last winter and used them for the gravy, stuffing, and more.) I make the gravy right in the bottom of the roasting pan, stretched across two burners; this way I can scrape up all the good, flavorful bits. If you don’t use the dippings to make gravy, I highly recommend you use them to drizzle over the sliced turkey, to keep it as moist as possible when you serve it.

* Stuffing: I also owe you a recipe for this but although I have two stuffing recipes on this site that I adore, I made a simple challah stuffing instead — although I made it decidedly less simple by making my own challah. Each loaf will make enough bread cubes to easily fill a 9×13-inch dish. I made mine with just celery, onion, and herbs, but you could easily sauté some mushrooms, diced apples, pancetta or crumbled sausage in too. Oh, and definitely make enough to have leftovers; this is important. 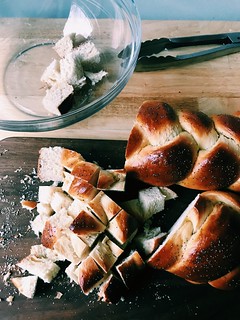 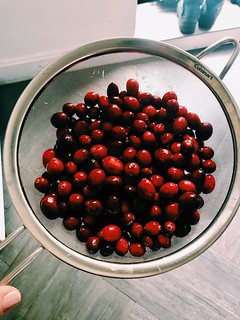 * Cranberry sauce: I went old-school with this, with a very early recipe on this site. I wanted something on the sweet side because my friend Ang was bringing a more savory one with tomatillos. Both were delicious.

* Green bean casserole with crispy onions: Don’t knock it until you’ve tried it (homemade). I make the green beans extra firm (just 2 minutes, then into ice water), then the mushroom sauce. Cool them both fully before mixing them. This goes in the fridge overnight. I’ll fry the onions — always make more than you need — and keep those separate until we’re about to eat the warmed casserole. 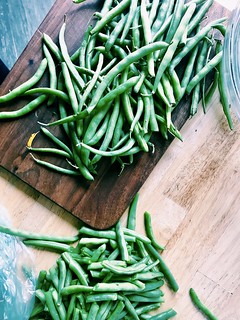 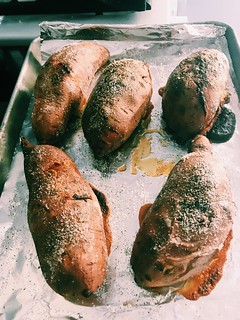 * Slow-roasted sweet potatoes: Once I realized I’d have no time for the root vegetable gratin I’d originally planned, I added these and 10/10, would recommend because the ingredient list is basically nonexistent. I baked them for the 2 to 3 hours before the turkey goes in, because they need a lower temperature. Broil them to get a good color on the skin. Leave them out while the turkey roasts (they’ll stay decently warm for a couple hours) and rewarm them just before eating. We served these in 2-inch segments, skin and all, and I was texting the recipe to friends demanding it even before going to bed that night. It’s that good.

* Stuffed mushroom casserole: My friend Ang brought this too and it was delicious. (She thinks it needs more cheese, though. I had no complaints!)

I didn’t make any pie at all! (Although my friend Molly brought a mincemeat pie with a cheddar crust and it was wonderful.)

* Bourbon pumpkin cheesecake: I made this in a 9×13-inch pan to cut as bars instead. Same recipe. Same temperature. However, you’ll want 1.5 or even 2x the crust, and it bakes in about 30. Seriously. It’s awesome. 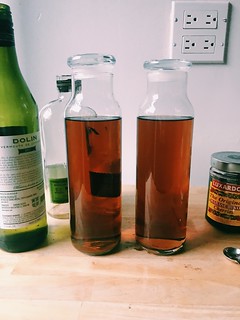 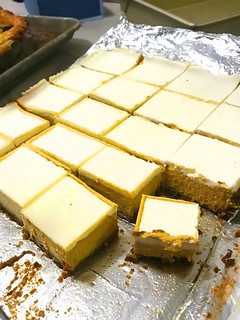 * Perfect Manhattans: Because why not. I made two carafes of them, just scale up the recipe until you run out of an ingredient or carafe space. Friends can pour or shake it over ice; leave cherries or orange peel strips on the side.

* Cranberry crumb bars with mulling spices: This is in The Smitten Kitchen Cookbook. 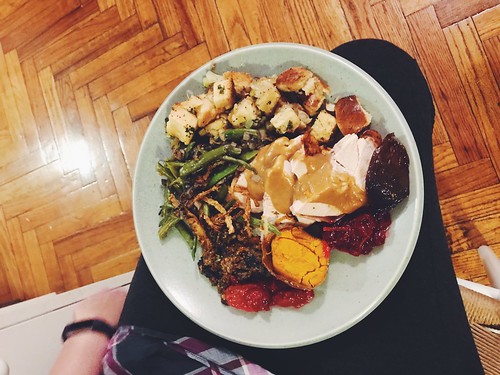 Finally, as always, I have a last minute recipe for people who do things at the last minute. It’s never my intention, but it’s consistently my reality. I made these biscuits the first time over the summer, a season where we eat outside and act like it’s no big deal (waah), for a 4th of July ribs fest along with slaw and corn and all of those summery things. So, they go really well with warm weather. But they’re also a great quickie dinner roll, or even a fun addition to a breakfast-for-dinner night (like we had last night) with scrambled eggs and bacon. They take 5 minutes to put together and 15 to bake and there’s nothing not to love about that. They’re craggy and crisp on the outside and plush within, perfect for splitting open with your fingers, buttering, drizzling with honey, and finishing with flaky salt or nestling into the side of your holiday plate. 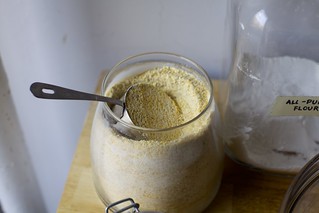 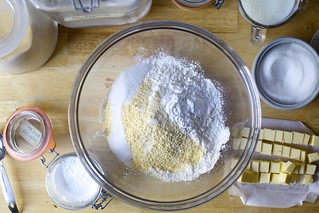 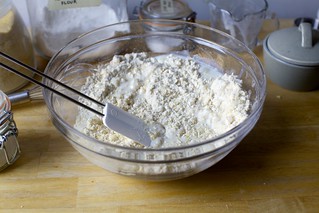 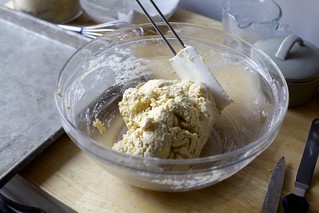 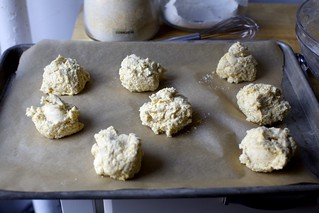 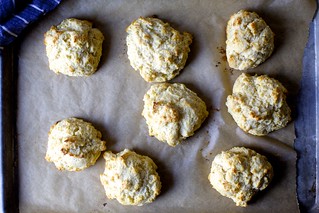 And for the other side of the world:
Six Months Ago: Pasta Salad with Roasted Carrots and Sunflower Seed Dressing
1.5 Years Ago: Rhubarb Upside-Down Spice Cake and Tall, Fluffy Buttermilk Pancakes
2.5 Years Ago: Failproof Crepes + A Crepe Party and Crispy Tortellini with Peas and Proscuitto
3.5 Years Ago: Crispy Broccoli with Lemon and Garlic, Not Derby Pie Bars, Liege Waffles, and Mushrooms and Greens with Toast
4.5 Years Ago: Strawberry Rhubarb Crisp Bars and Five Egg Sandwiches

** have you bought it? There’s so much great Thanksgiving and holiday stuff in there, like a chocolate pecan slab pie, a kale caesar that we have out at almost every dinner party, a wild mushroom shepherd’s pie, and a few of my favorite cookie recipes, ever. Between now and December 12th you can order either my first book, The Smitten Kitchen Cookbook, or Smitten Kitchen Every Day, my second with a custom inscription of your choice from The Strand and it will arrive by Christmas.

Shown here are 8 large biscuits; you can make 12 smaller ones, just use the short end of the baking time range.
Heat oven to 450°F. I covered my baking sheet with parchment paper but it shouldn’t be strictly necessary, and many shouldn’t go in this hot of an oven, so use your own discretion.

Stir flour, cornmeal, sugar, baking powder, and salt in the bottom of a large bowl with a fork or whisk. Add butter and toss to coat cubes in dry mixture. Use your finger or a pastry blender to break the butter into smaller and smaller bits, until the largest is pea-sized. Add buttermilk and stir once or twice, until a dough comes together.

My very scientific method of dividing the dough evenly is to press it gently into the bottom of your mixing bowl into roughly a circle. Cut into 8 or 12 wedges. Pull out one triangle of dough with a soup spoon for each biscuit, pressing it into a craggy, messy ball, then drop it onto your baking sheet. Repeat with remaining dough.

Bake for 12 to 14 or 15 minutes; smaller ones should be done at 12, larger ones at 14 or 15. Remove from oven and serve warm. Biscuits are best on the first day. On the second, gently rewarming them will improve the texture. 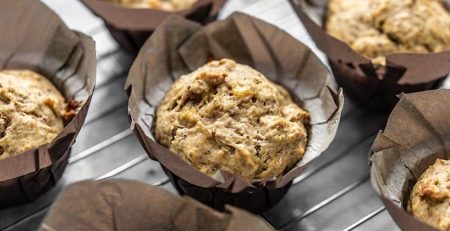 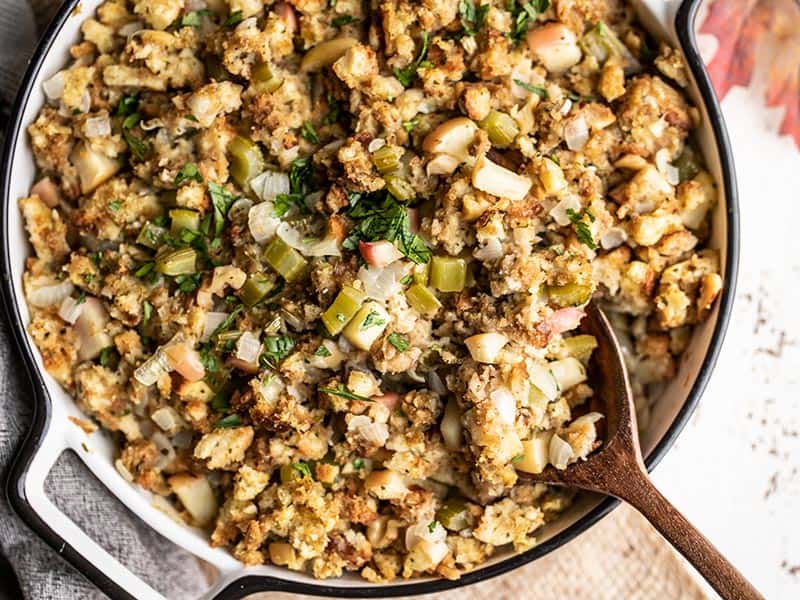 Low-Carb Superfoods to Try Out

Superfoods that are popular are often high in carbs, even if they are healthy and low in fat and calories.... read more 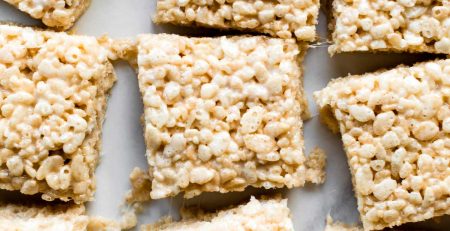 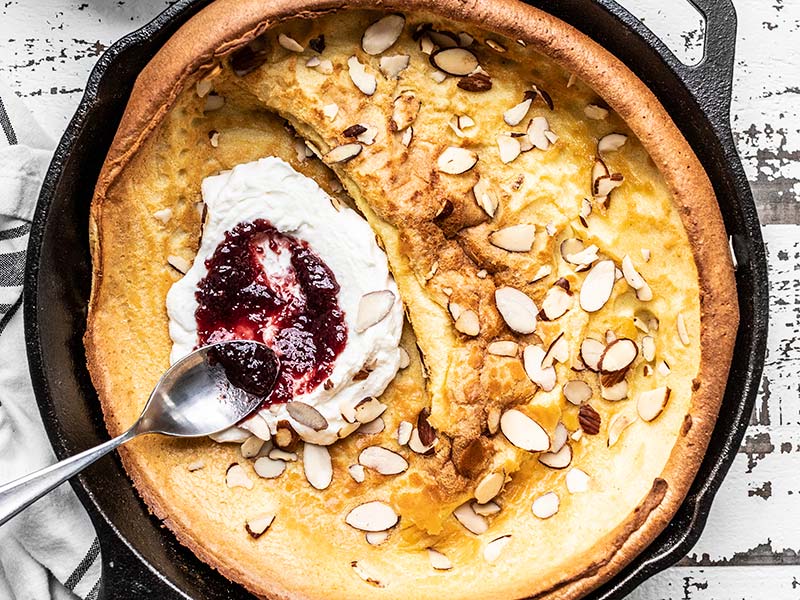 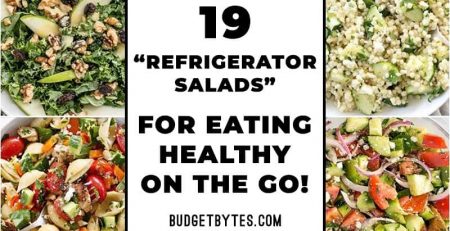 19 Refrigerator Salads for Eating Healthy On The GO! 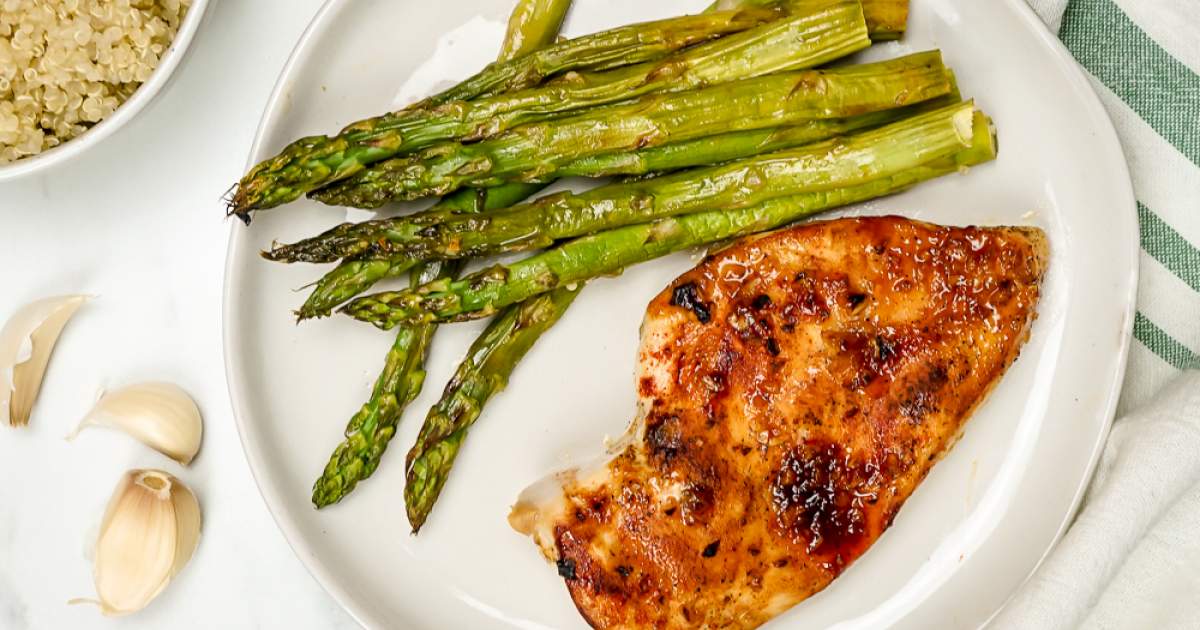 [unable to retrieve full-text content] This easy Honey Garlic Chicken and Asparagus is a weeknight staple since it uses simple ingredients... read more 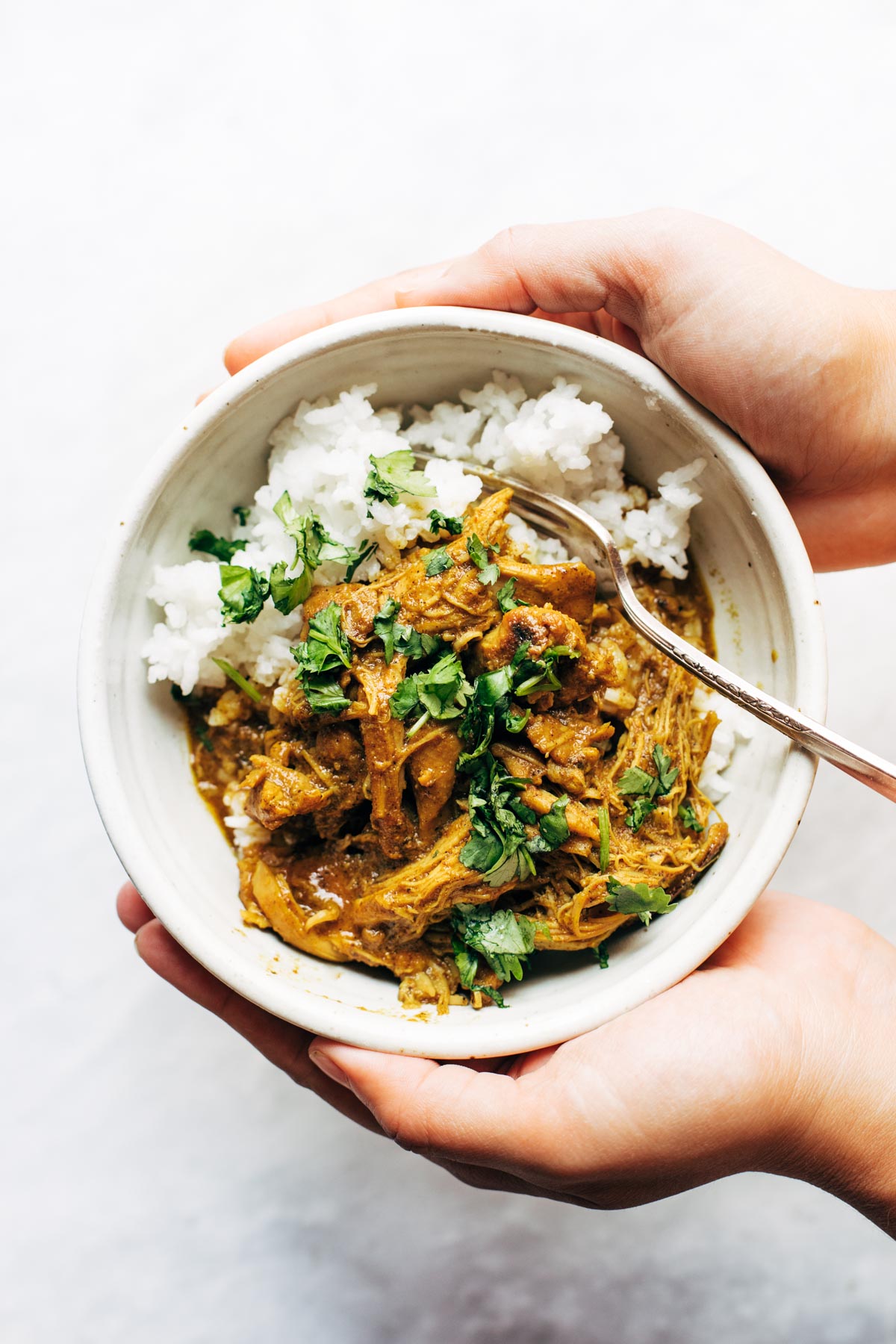 Magic Green Sauce? Made with all green foods // whipped up in five minutes // eaten every day for the rest... read more 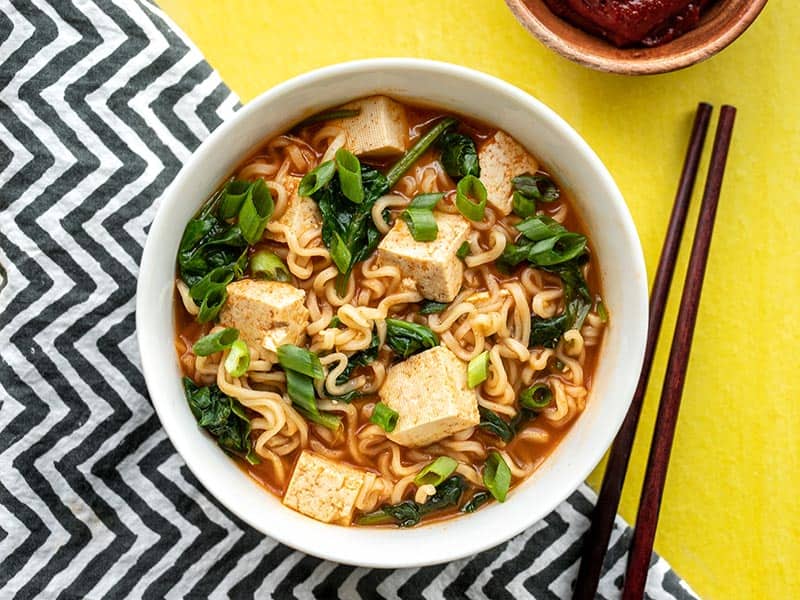