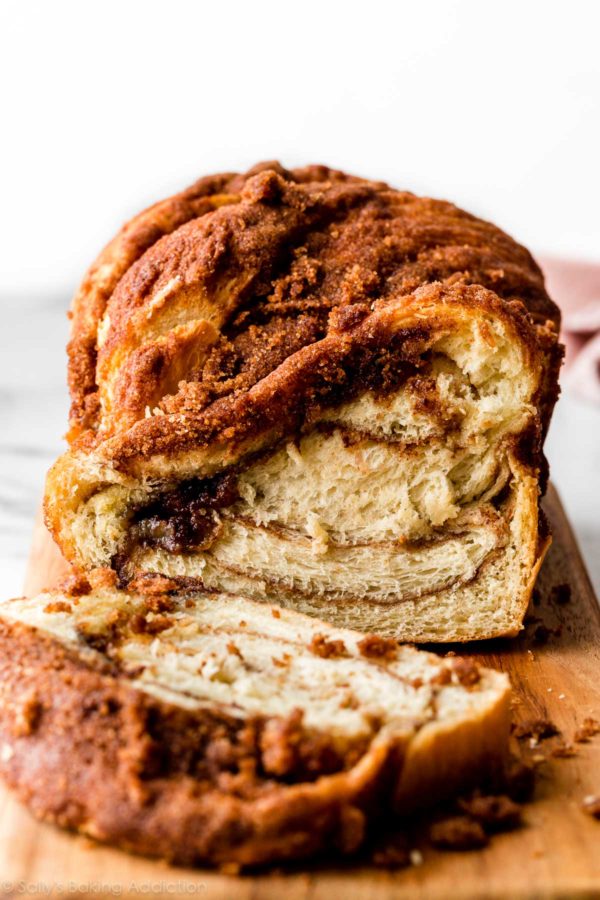 Rolled and twisted, this simple 8 ingredient bread dough transforms into an absolutely irresistible cinnamon crunch bread. Roll the dough up with a butter, cinnamon, and brown sugar filling, then create a crunch topping made from the same ingredients. Each bite is buttery, soft, and flaky with an unbelievable cinnamon sugar crunch crust on top.

Tell Me About This Cinnamon Crunch Bread

The following is an overview to help you understand the process before you get started. You’ll find the full printable recipe below.

Make and knead the dough, then let it rise:

Punch down the risen dough, then roll out into rectangle. Spread extra soft butter on top, then sprinkle with your brown sugar and cinnamon mixture. Tightly roll it up cinnamon roll style. Place the log on its seam, then cut the log in half lengthwise using a sharp knife.

Criss-cross one half on top of the other half forming an X. Tightly twist the two together. Pinch the outer edges to seal as best you can, then place into a greased 9×5 inch loaf pan.

Let the dough rest and prepare the cinnamon crunch topping:

Can I Use This Cinnamon Crunch Topping on Bagels?

This is a basic soft bread dough that’s rolled, twisted, filled, and topped with butter, cinnamon, and brown sugar. It looks like a lot of ingredients but the filling and topping ingredients are mostly the same. Read the recipe before starting so you’re prepared for the rolling and twisting step.

How to Join Sally's Baking Challenge Recipe: We publish a new challenge recipe on the…