Shortly after my husband and I began dating — the dark ages; no seriously, his phone at the time looked like this and I was like whoa, look how fancy you are, dude — we went on a road trip somewhere, stopped at a gas station, and I told him to grab something candy-ish, surprise me. This boy came back to the car with a pack of Rolos, and honestly, it’s amazing we didn’t break up right then and there because Rolos are terrible candy and it’s about time someone said it. [Oh I can hear the reverberations of a thousand unfollows but I will absolutely die on this hill, and remain undeterred.] They’re gooey so they give off the appearance, the suggestion, of being good candy but the goo tastes like nothing. I feel this way about all caramel that appears inside candy bars, which tastes me more like thickened corn syrup than anything toasty and nuanced. Plus, they’re inside a milk chocolate shell, so it’s sweet against sweet, no contrast whatsoever, and so help you if you don’t eat them in a single bite, I hope you enjoy having sticky hands for the rest of the drive. I know, I know what you’re thinking: it’s an absolute mystery how I ended up with such a picky child.

In my unsolicited opinion, three things could improve Rolos: a real toasty, buttery caramel, the contrast of dark chocolate, and a bit of salt. As good caramel is gooey, we’re not going to fight it, but that’s what plates and forks are for. 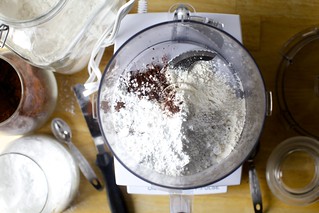 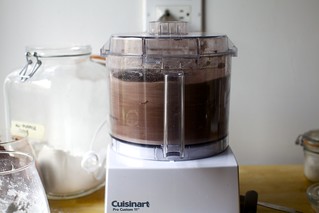 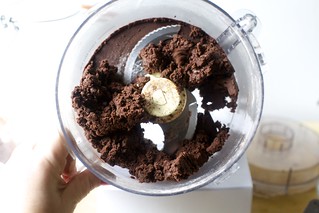 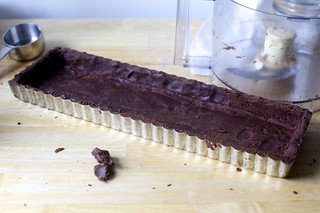 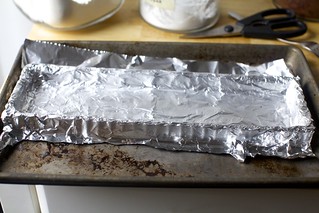 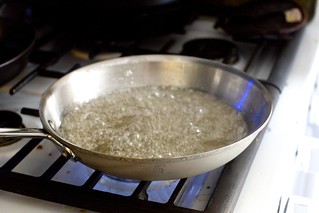 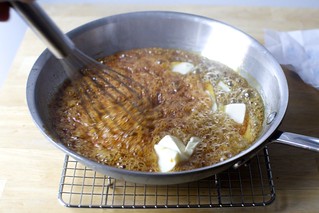 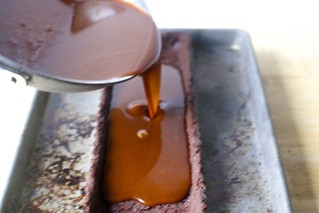 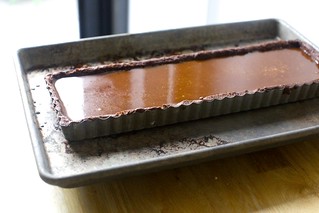 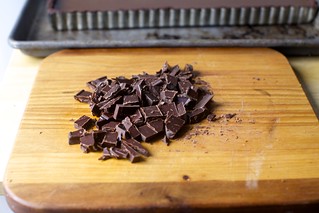 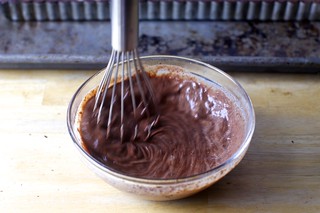 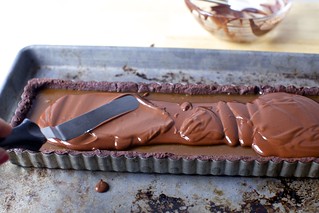 Claudia Fleming knows this. Owner and pastry chef at the North Fork Table & Inn on Long Island, she’s even more famous famous for her years as pastry chef at Gramercy Tavern, where she led the way in redefining high-end desserts with American flavors. Her 2001 book, The Last Course, has been out of print so long, don’t even exhaust yourself trying to track it down, but in the new Genius Desserts* book from Food52, which includes some treats from Kristen Miglore long-running Genius Recipes column plus new worthy inclusions, it gets a revisit. In the notes, Miglore explains that when Fleming introduced the tart, which is finished with flaky sea salt, notable amounts of salt in desserts was still considered something new and unusual; she had to talk people into it. How times have delightfully changed (for phones too). 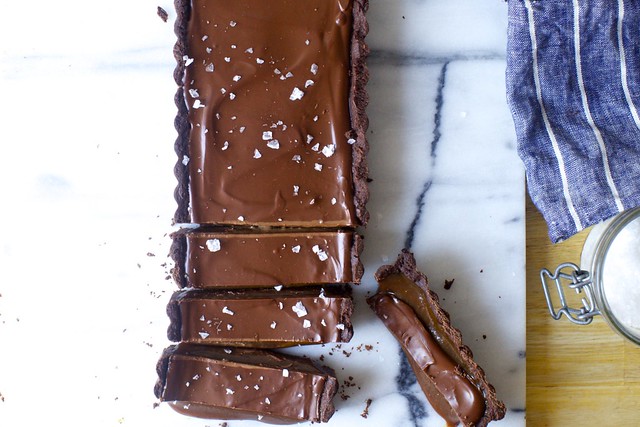 I do not imagine that Fleming was inspired by glove compartment Rolos, but this tart gets the idea of them so right, including a bittersweet chocolate ganache on tart, which reins in the sweetness of what is basically a fork-and-knife vehicle for very good caramel. The tart base is wonderful; it tastes like a good chocolate cookie. And the mess? At her restaurants, Fleming serves this as small single-serving tarts that hold everything in neatly. But I find that even made in a larger pan, you have about a minute after you slice the tart before the caramel escapes, more than enough time to get it to your plate where it is yours and yours alone to enjoy, as it should be. 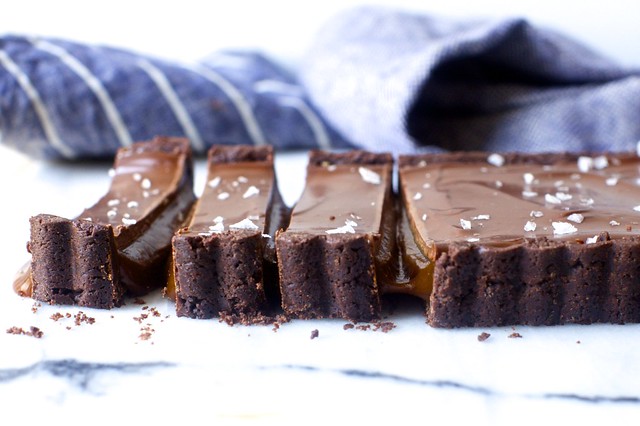 * Not to toot my own horn too much, but there’s a Smitten Kitchen recipe in there too (Salted Brown Butter Crispy Treats) and another one in the bonus packet of recipes they couldn’t fit in the book but wanted to (Gooey Cinnamon Squares, from The Smitten Kitchen Cookbook, a mashup of snickerdoodles and gooey butter cake).

And for the other side of the world:
Six Months Ago: Watermelon and Cucumber Salad
1.5 Years Ago: Broccoli Rubble Farro Salad and The Red and The Black
2.5 Years Ago: Almond-Rhubarb Picnic Bars, Cucumber Yogurt Raita Salad and Chicken Gyro Salad
3.5 Years Ago: Swirled Berry Yogurt Popsicles, Pasta Salad with Roasted Tomatoes, and Pink Lemonade
4.5 Years Ago: Nancy’s Chopped Salad

Make chocolate crust in a food processor: Pulse sugar, flour, and cocoa powder until mixed. Add butter and run the machine until it’s finely chopped and basically disappears into the dry mixture. Add yolk and vanilla and run the machine — not just pulse it — until the mixture begins to clump. It make take 30 seconds, but it will begin to form clumps.

Make chocolate crust in a stand mixer: In bowl of an electric mixer, combine the butter, flour, confectioners’ sugar and cocoa. It’s going to be bumpy at first but keep letting the machine bang it up until it is softened, and keep beating until smooth. Scrape down sides. Add egg yolk and vanilla, and mix until blended. With this method, if the mixture feels too soft to press into a crust, wrap it in waxed or parchment paper and refrigerate it until mostly firm.

Press crust into bottom and up sides of a 9.5- to 10-inch round tart pan with a removable bottom (for easier release). Keep a quarter-sized ball of crust aside to patch cracks later, if needed. Transfer pan to freezer and freeze until solid, about 20 minutes. Meanwhile, heat oven to 325 degrees F.

Bake crust: Prick frozen crust with a fork, coat a piece of foil with nonstick spray, and press it oiled-side-down tightly against the frozen crust, so it is fully molded to the shape. Bake tart with foil (no pie weights needed) for 15 minutes, then carefully, gently, a little at a time, peel back foil and discard. If cracks have form, this is when you patch them with reserved dough. Return to oven for 5 to 10 minutes more, until pastry looks dry and set. Let cool on a rack while you make the caramel.

Make caramel: In a large saucepan with a light-colored interior (this will make it easier to see the caramel’s color), combine the sugar, water, and corn syrup, then turn heat to medium-high. Cook undisturbed (no stirring needed, just tilt and swirl the pan if it looks uneven but really this shouldn’t be very necessary) until the sugar takes on an amber or pale copper color, about 10 minutes. Remove from heat and carefully whisk in the butter — it’s going to boil up and steam, be careful — until melted, then the cream and creme fraiche or sour cream and a couple pinches of salt, until smooth. Pour into prepared crust. Let caramel set in the fridge until cool and firm, about an hour.

Make ganache: Place chopped chocolate in a heatproof bowl and bring cream to a simmer. Pour over chocolate and let sit undisturbed for 2 minutes, then whisk until smooth. Pour it over cooled caramel layer, spreading evenly with a spatula or butter knife. Let set in the fridge, another hour, or until firm to the touch.

To serve: Sprinkle the top of the tart with flaky sea salt. A knife dipped in hot water cuts fairly cleanly, but slices will become messy within a minute of being cut, so try to get them to their plates quickly.

To store leftovers: Fleming recommends doing so at room temperature, but I think it makes things too messy. Spray two small strips of foil with nonstick spray and press them against the cut/open sides of the tart and wrap them tight; this will keep it from spilling out in the fridge. Tart should keep in the fridge for a week, not that I believe it will.