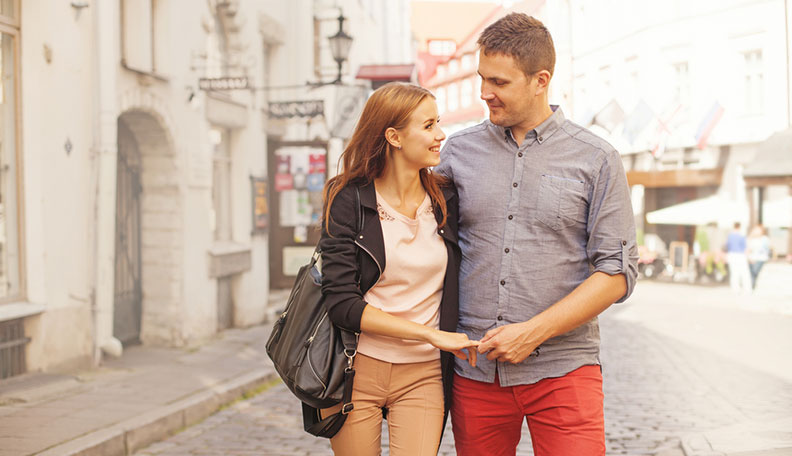 I saw many of my friends get involved with people who simply didn’t care about them. My friends would be running around, doing everything for their partner. And their “partner” wouldn’t even bat an eyelash in their direction. Now, that is what you call being taken advantage of in a relationship.

But sometimes, people aren’t so obvious. Sometimes, they’re much more subtle with how they choose to control you. This is why, no matter how much you like someone, really look at their actions. The last thing you need is to waste your time on someone who doesn’t actually care about you.

My dad’s voice still rings in my ear, “Listen, Natasha. Eventually, you’ll get a boyfriend. But you don’t want a boyfriend; you want a partner—someone who treats you equally.” Even though I was sixteen and didn’t really care, he was right. Getting a boyfriend was the easy part. [Read: 15 signs of a bad relationship you should never ever tolerate]

Anyone can land themselves a person to spend time with and have sex with. But you don’t want that. If you did, you’d look for a casual relationship. For a relationship, you need a partner. This is someone who respects and cares about you. And that… well… that isn’t easy to find.

Better to know now the signs you’re being taken advantage of in a relationship, so you make the changes you need.

#1 There’s never a thank you. You do a lot for your partner. If they want something specific, you cook it for them. If they’re bored, you take them out and entertain them. You’re like a three-ring circus.

But never do they take the time to show you their appreciation by saying “thank you.” This shows they expect this to be done for them, but that isn’t how life works. [Read: How to spot the early warning signs that someone is using you]

#3 They’re perfect when you’re alone. When it’s just the two of you, they’re an amazing partner. They shower you with attention, they’re funny, the sex is amazing; everything seems to go well. But go out with them in public or have people over and you see a massive switch. Almost as if they don’t want people to know you are an item. [Read: How to spot selfish people and stop them from hurting you]

#4 They have eyes on someone else. Maybe it’s someone from work or a friend, but one thing is for sure, they’re not focused on you. This isn’t innocent flirting. We’re talking about something more than that. They give their attention and time to someone who isn’t you. If they’re preoccupied with someone else, well, they don’t really care how you feel.

#5 They don’t ask for your opinion. If your partner isn’t asking for your opinion on important topics, it’s clear they don’t respect your opinion, or they think they know what you would say. But either way, it doesn’t matter. Because in the end, they’re not letting your voice be heard.

#6 They don’t pull their weight. Regardless if you live together or not, they’re not doing their fair share. You usually get stuck with the majority of the housework and cooking. They don’t ask if you need help because it’s assumed you’ll just do it. The lack of effort on their part shows they’re not concerned about your wellness. They’re taking advantage of you.

#7 They don’t ask for your advice. What’s the point of having a partner if they’re not going to be someone you can seek advice from and vice versa. This is supposed to be one of the closest people in your life, someone who’s your best friend. But they don’t ask for your advice. They make decisions without you. And if that’s the case, then it’s not a partnership. [Read: 16 discreet signs you’re being taken for granted by your partner]

#9 They’re unfaithful. Come on, you know this isn’t a good sign. If your partner is cheating on you, hell, yes, they’re taking advantage of you. They’re taking a huge risk, yet, they feel they’re going to get away with it. Cheating is one of the biggest signs they don’t respect you as a person or as a partner.

#10 They make plans without you. Summer vacation is coming up, and they already booked a trip to Mexico with their friends. Oops. They forgot to let you know. They didn’t ask you if you wanted to come and just assumed you’d be cool with the plan. Well, a healthy relationship discusses plans before confirming them. [Read: 14 common reasons why relationships fail so often]

#11 They’re not romantic. Some people naturally aren’t romantic, and that’s okay. But usually, they will try extra hard when it comes to impressing their partner. Your partner simply doesn’t try at all. They don’t display any romantic gesture because they don’t care. It’s that simple. If they cared, they would try.

#12 They don’t care about your feelings. They invite people over when you’re sick or travel with friends on your birthday. See, they know these decisions will upset you, yet, they still do them. That’s the problem. They do not consider your feelings or think about how you feel when they do something that will hurt you. [Read: Are you in a relationship with a narcissist?]

#14 You’re feeling like you should try more. When someone takes advantage of you, it’s crazy how we strive even harder for their attention, affection, and love. You surprise them with a home cooked meal or buy the shirt they really wanted.

You do all these things in hopes for them to put more effort into the relationship. But this only fuels their lack of consideration for you. If you feel the need to try more in hopes of them reciprocating, you’re being taken advantage of in a relationship.

#15 They don’t care what you do. It’s normal for your partner to ask, “How was your day?” It’s a simple question but shows their interest in knowing how your day went. If your partner isn’t asking about what you did, it shows a lack of care for you. They’re not concerned with what happened to you or how you feel. They are taking advantage of you. [Read: What to do when something doesn’t feel right in your relationship]

#16 You feel used. This will be the biggest sign. Yes, the other signs are important, but if you feel that you’re being used, well, there’s your answer. You should never go against your gut instinct, especially when you feel something isn’t right. If you feel it, you’re right.

[Read: 12 signs of love bombing not to be confused with real love]

No one wants to see these signs of being taken advantage of in a relationship. It sucks. Plain and simple. If you’re noticing your partner displaying these signs, it’s time to rethink your relationship.

PREVIOUSWhat Is My Purpose in Life: How to Find Meaning When You Feel Lost
NEXTMy Boyfriend Likes Other Girls’ Pictures on Instagram: What to Do?