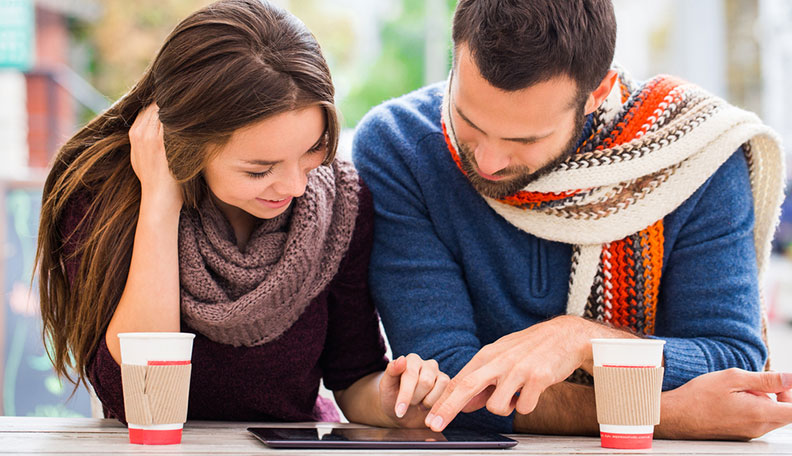 You’re not sure what’s going on between you two. Everything you need is right in front of you. Time to pay attention to the signs he wants to make a move.

When it comes to guys, they can be a wee bit confusing. But let’s be honest with ourselves—they’re not that complicated. Rather, we make the situation dramatic and complicated. In reality, we’re not paying attention to the real signs he wants to make a move.

You know, the signs that will give you the answer. And that’s partly because most of the time, we don’t want to know the actual answer. Why? Because what if it’s not the answer we were looking for?

But isn’t it better to know where you stand with a guy, so you stop wasting your time? The answer is yes. Even though I know you’re cringing a bit; you deserve the truth. [Read: How to get your crush to like you back]

How to tell the signs he wants to make a move

If you’ve been banging your head against the wall trying to figure out what’s going on with him, you can give your head a rest. If a guy wants to make a move, he’ll let you know, trust me. He may not tell it to your face, but you’ll be able to figure out by his actions whether he’s interested in you or not.

Be two steps ahead.

#1 You’re feeling the vibes. You have this thing called intuition, listen to it. If you feel there’s some sexual tension between you, there probably is. Now, it doesn’t mean he’s going to make a move, but it does show that he wants you. And, as we all know, that’s a pretty good first step. If you’re feeling the vibes, listen to them. [Read: These signs of chemistry reveal an instant connection]

#2 His body language. When it comes to signs, there’s nothing more obvious than body language. Our body language speaks the words we’re too scared to say out loud. If he wants to make the first move, he’s going to let you know he wants you subconsciously. Whether it’s through hugging, touching, or even eye contact.

#3 He can’t look you in the eyes. He wants to look at you in the eyes, but when he does, he quickly looks away. Now, if you never speak and he’s doing this, then he’s not interested. If you have a good relationship, but he’s nervous to look at you, then he’s trying to calm himself around you. [Read: How to read people and understand what they’re thinking instantly]

#4 He’s nervous. What other reason is there to be nervous other than concealing his feelings for you. If he’s nervous around you, stuttering, sweating, those are signs he’s into you. More so, those are signs he wants to make a move but is terrified of doing it. If you want to take the relationship to the next level, then why don’t you make the first move? [Read: How to ask a guy on a date – The walkthrough all girls need to know]

#5 He’s always there. When you need him, he’s there. There’s no question about it. A man who doesn’t care about you is unreliable; you’ll never be able to depend on him. But he’s someone you can depend on. He wants you to see that he’s a good partner for you.

#6 His friends tease him. When you hang out together, his friends are all over it. They love taking the opportunity to tease him around you. They know he likes you, but he’s scared to make a move. As friends, teasing him is their way of pushing him to make a move.

#7 He’s hyper around you. When you hang out, it’s like he has a sudden burst of energy. And that’s because he’s into you. He can’t even control his excitement. When you spend time together, he’s full of fun ideas and plans. Maybe one of those plans will end with a kiss… who knows. [Read: How to get a guy to kiss you when you want him to]

#8 He’s chatty online. In person, he’s a nervous wreck, but when you talk online, he’s very chatty. The true him comes out when he feels comfortable. He sends you hilarious memes, songs, and can have deep conversations with you. He’s just a little nervous in person to relax and be himself.

#9 His face shines bright when he sees you. When he turns the corner and sees you, his face goes from flat to a full smile. What can I say? The guy likes you. If he didn’t, he wouldn’t even spend the time to look at you. You make him smile, and all he’s thinking is how he can take the relationship to the next step. [Read: How to tell if you crush likes you with these subtle cues]

#10 He tries to please you. When you’re feeling down, he’ll go out of his way to buy you ice cream or tell you a funny joke to see you laugh. He wants to make you happy, and he goes out of his way to do it. That’s the sign of a man who wants something more than just friendship.

#11 He pays attention to you. When you’re talking to him, he listens. But really he listens. He’s not on his phone, saying “yeah, yeah,” whenever you ask him a question. Instead, he’s engaged and interested in what you have to say. That’s because he likes you.

#12 He flirts with you. Now, this is a big one. Some guys are nervous to flirt with the girl they like, but eventually, it’ll happen. Flirting is the next step, and he wants you to see that he’s into you. If you flirt with each other, he wants to make a move. [Read: How guys flirt – 15 subtle things guys do when they like a girl]

#14 He makes jokes about the future. No one is going to talk about the future unless they want a future with that person. If he’s cracking jokes about being your boyfriend or doing things in the future, don’t take it lightly. Those jokes mean something to him on some level. Now, it doesn’t mean he’s going to ask for your hand in marriage, but he is into you. [Read: 30 subtle, obvious and really sexy flirting tips all women should know]

#15 He tries to impress you. When you’re around, he talks himself up. He wants you to see that he’s a real man; a man you can depend on.

[Read: The signs he likes you but is afraid of rejection]

If you want to know what’s going on in his head, read the signs he wants to make a move. Though you can’t read his mind, you’ll be able to figure out your next step.

PREVIOUSIs He Leading You On? 16 Definitive Signs He’s Playing You for Fun
NEXTShould You Try Online Dating? The Guide to Decide if It’s for You