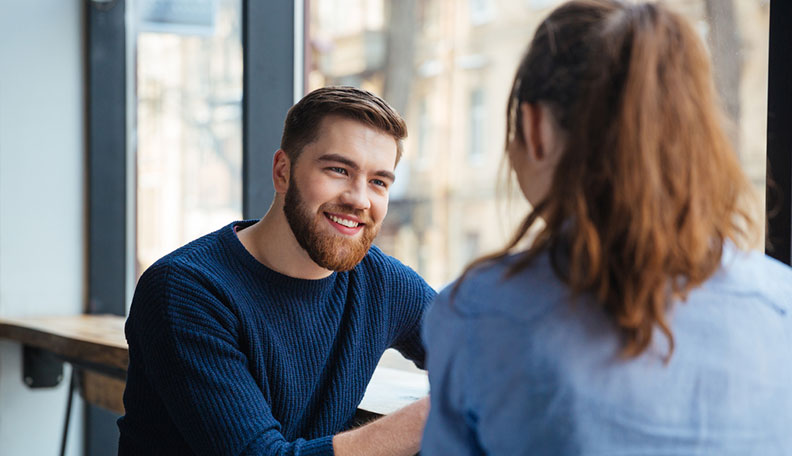 Women overthink. I should know, I’m a woman too. When it comes to love, there’s no need. The signs he’s falling for you hard are always right there.

When it comes to men, we always say they’re so hard to figure out, especially seeing the signs he’s falling for you hard. But come on, you know that’s not true.

Both men and women aren’t that complicated. I used to think men were so complex when it came to love, but then I started to understand what was going on.

See, men show us the signs. They show us signs all of the time, but we’re not seeing them in the right perspective. I think it’s because of all the chick flicks we watched growing up. But most of us know when someone likes us or not. This isn’t rocket science. [Read: Understanding the feelings that best describe true love]

How to read the signs he’s falling for you hard

Listen, to start seeing the signs isn’t easy. There’s always a risk he won’t be into you, and who wants to come to that realization? Everyone wants the person they like to like them back. So, if you want him to be falling for you or even if you don’t, know the signs. Or else you can get yourself into some drama depending on what you want to happen. [Read: Is he attracted to you? 16 giveaways to watch out for]

So, let’s get started. Stop overthinking! The signs he’s falling for you hard are right there.

#1 He listens. But he really listens. He’s not staring at his phone when you’re talking to him. Instead, he’s looking at you, really listening to the conversation. This is a sign that he not only respects you, but he sees you as someone important. Plus, being an active listener is always a good quality in a person. [Read: 19 subtle signs a guy just can’t hide if he likes you]

#3 His eye contact is insane. Now, I’m not talking about creepy eye contact. If you’re feeling weird, then this isn’t the look of love. So, beware of that. But eye contact is usually a great sign to see how he feels about you. If you are sharing long eye gazes, well, it looks like he’s smitten. [Read: 15 sweet gestures that express love without words]

#4 His free time is spent on you. People have busy lives. He’s probably working or going to school, so he doesn’t have a lot of free time. But the free time he does have, he makes sure it’s spent on you. No one would give their time to people they didn’t like – no one. He has friends and family he could see, but he chose to see you.

#6 He gives you little things. No, he doesn’t need to buy you a new car or expensive jewelry. But he’ll bring you something small, something he thought you’d like. Maybe it’s a record of your favorite band or frozen yogurt. If he likes you, he’ll makes these small gestures. [Read: 18 clues to decode a guy’s body language when he really likes you]

#7 He wants you to be happy. When someone loves another person, they focus on making them happy. If he isn’t trying to make you happy, then he’s probably not into you. This is called compassionate love and is healthy in a relationship. If you’re feeling down and he cooks you dinner as a surprise, he cares.

#8 He’s okay when you’re gross. Listen, just because you’re a woman doesn’t mean you’re not gross. Women aren’t perfect angels when it comes to hygiene. Maybe you leave your dirty underwear on the floor or pick your nose. Usually, he would be grossed out by this, but he doesn’t seem to be bothered when you do it.

#9 He tries new things. Maybe you’re a rock climber or you go sailing on the weekend. He’s never done those things before, but he’s willing to now that he’s met you. A man who’s falling for you will want to share his life with you. He’ll want to get into your world and vice versa.

#10 He does favors for you. If you need help with your groceries, he helps you. If you have a plumbing problem in your apartment, he’ll come and try to fix it. He wants to help you. If he didn’t like you, he wouldn’t help you. These small acts show he cares on a deeper level. [Read: 17 gestures that are louder than words when it comes to love]

#11 You’re weird, and he loves it. In the beginning, you’re probably trying to hide your weirdness. But, of course, you can’t hide that part of you. It’s the best part! Everyone has their own weird quirks which makes them unique. Some people may not like your weirdness, but he does. In fact, he can’t get enough of it.

#12 He’s always talking to you. You don’t need to be side-by-side to talk. He makes sure to send you good morning texts, and that you’re aware he’s around. Because he wants to keep the communication flowing back and forth. He wouldn’t do that if he’s not into you. It’s as simple as that.

#13 Your opinion matters. When he talks to you about an important topic, he asks for your opinion. Firstly, this shows he respects your opinion, and secondly, it shows what you say matters to him. He wants you to know what’s going on in his life because he sees you in it for the long-term.

#14 He gets worried. When you’re in a bad mood or feeling sick, he shows concern. He asks you if you’re okay or if you need anything. This is one of the clearest signs he’s falling for you hard and really cares about you. If he didn’t, he would just tell you to feel better and wait a couple of days to text you.

#15 He brings you to the family. Now, this is a big step. You know this is a big step. Meeting the family isn’t something casual. He’s showing you to his closest people, the people he cares about. He wants them to meet his potential partner, and see what they have to say. He’s falling for you. [Read: How to charm your boyfriend’s parents when you meet them the first time]

[Read: The smitten signs that say your boyfriend is in love with you]

Now you know the signs he’s falling for you hard. Half of the work is already done. What you need to do now is put the pieces of the puzzle together. Is he falling for you?

PREVIOUS13 Avoidable Habits That Will Change Your Life for the Worse
NEXTWhat Is My Purpose in Life: How to Find Meaning When You Feel Lost