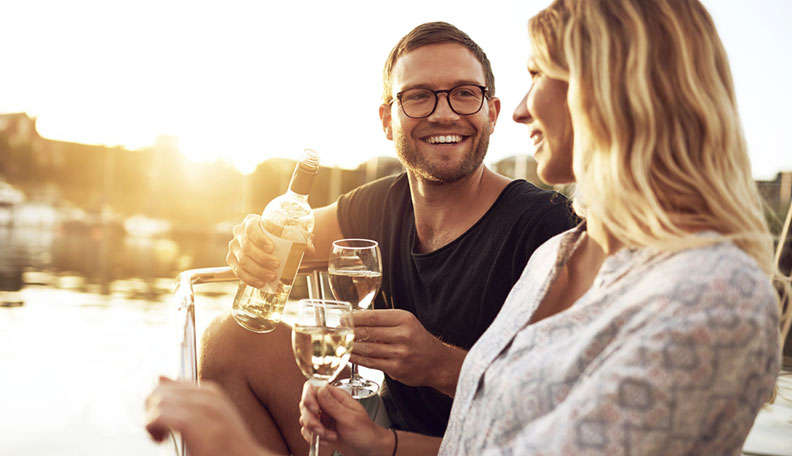 You’re daydreaming and drooling over him, but don’t you want to know if he’s feeling the same? It’s time you knew the signs a man wants to be with you.

As a tomboy, I never thought I’d get to see the signs a man wants to be with you happen for me. Sure, I thought I was cute, but everyone’s eyes were stuck on the cool girls. In hindsight, they weren’t cool, they just hit puberty before me.

Anyways, I heard guys talk about other girls, but never about me. And I can’t say it didn’t hurt; it did. Of course, you want attention from other people. And while my list of crushes kept growing longer and longer, I had no idea if anyone felt the same about me.

I was convinced that no one wanted to be with me. At least, that’s what I thought. In reality, I wasn’t paying attention to the signs.

There were guys who liked me, but they were shy or felt I was too intimidating to approach. So, they hung by the sidelines and never really made a move, which is crazy! If I had known how they felt, I would have taken the first step.

[Read: Do guys like it when women make the first move?]

But that’s the thing! I didn’t know the signs. Sure, I could see the obvious ones, but if they were more subtle, they flew right over my head. I don’t want that to happen to you. Be able to spot these signs right away so that you can decide whether or not you want to act on them.

Of course, you want to know the signs a man wants to be with you.

#1 He invests time into you. Listen, no one spends any time with someone they don’t like if it’s not forced. If a guy invests his time on you because he wants to, well, he likes you. It’s really as simple as that. [Read: 30 peculiar signs to look for when a guy likes you]

#2 He calls/texts you regularly. Of course, you have male friends that will call or text you regularly but usually not on a daily basis. If he’s taking time out of his day to call or text you, it’s a sign of interest in you. If not, they wouldn’t waste their time talking to you.

#4 He asks you out. Well, if he gets the courage to ask you out on a date, then it’s a clear sign he’s into you. This is one of the most obvious signs a man wants to be with you, and you shouldn’t take it lightly. It’s not easy to ask someone out. Many men fear rejection. But this guy took the next step.

#5 He spends time with you. Sure, he may be busy with school and work, but in his spare time, he’s with you. He loves spending time with you, and that’s a great sign he wants to be with you. Could you be with someone you couldn’t stand to hang out with? Exactly.

#6 Your opinion matters. When he talks about things going on in his life, he doesn’t just tell them to you. He’s talking about them because he wants your opinion. He wants to know what you think because he respects and values your opinion. He wouldn’t do this if he didn’t want to be with you. [Read: 12 science-backed clues to know if a guy really likes you for sure]

#7 He opens up. Men aren’t quick to open up about their feelings. They usually take their time to get to know someone before they become vulnerable. He tells you his past and opens up emotionally. This isn’t something men do with every girl. Only with the ones they want to be with.

#9 He’s interested in your life. I’ve met many men that liked me but were never interested in what I do or my hobbies. That isn’t a man who wants to really be with you. If a man wants to be with you, he takes interest in the things you do and will support your hobbies and passions.

#10 He’s there when you need him. When you’re in a tough spot and need a helping hand, he’s right there. He doesn’t leave you alone, letting you figure it out on yourself. No way, that’s not a man who wants to be with you. Instead, he’s helping you figure out the next step. [Read: The signs your guy friend is falling for you even if he is hiding it]

#11 He talks about the future. Though he may not be making a move, he’s certainly dropping hints about the future. Maybe he’ll mention going on a vacation together in the summer or thinking about moving out of his parent’s house. And though they may not seem important, these conversations show he sees you in his life.

#12 He listens. I know this may not seem like a big deal, but it is. Many people hear you, but they’re not listening. When you talk to him, he really listens to you. He’s not staring at his phone or saying “yeah” until you stop talking. He’s actively listening to you because he cares.

#13 He texts you back quickly. If someone doesn’t like you, they don’t rush to text you back. But when you text him, he’s quick to reply. Why? Because he likes you! If he takes hours and hours to reply, then take it as a hint. He’s not into being with you. [Read: 17 signs he likes you more than as a friend and wants to ask you out]

#14 The sex gets better and better. If you’re having sex with him, you probably noticed it becoming more intense and intimate. And that’s because you are more emotionally connected. Sex is one thing, but when you have sex, there’s more to it.

#15 He loves touching you. Of course, if you want him to touch you. And this isn’t just in a sexual way. He just loves touching you. Whether putting his hand on your back or touching your arm when he makes a joke, he can’t get enough of it. [Read: Does he like me? How to decode his body language for the answer]

#16 You feel it. When you’re around him, you feel different. There’s a different energy when you  are with each other. If you feel that he likes you, then you’re probably right. Don’t ignore your gut instinct because it’s probably right.

[Read: How to tease a guy and make him realize how much he likes you]