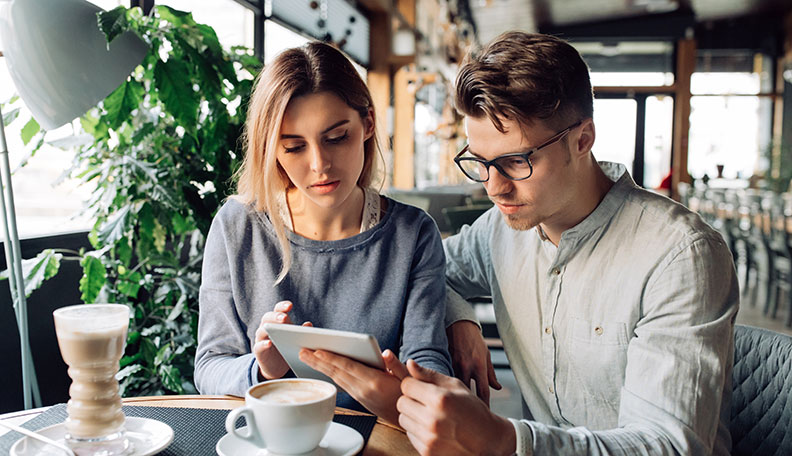 You probably already know guys are weird, and it is why it can be so confusing to know his intentions. So, learn the signs a guy is flirting with you!

Men are not as easy to read as we have been made to believe. We’ve always been told that women are mysterious, but men are simple-minded. You don’t need to know the signs a guy is flirting with you. That just is not true. When it comes to dating, romance, and, of course, flirting, men are just as complicated and mysterious as we are.

So much goes into flirting it can be difficult to decipher a joke’s intent. Was he complimenting you, teasing you, or just being a funny person?

Flirting is a pretty simple thing off the bat, but deep down it is sort of messy. You may think a guy is flirting with you when in fact he has a girlfriend and is just being nice. I cannot tell you how many times that has happened to me.

I have even given my number to a guy I thought was flirting with me. He turned out to be gay. Talk about embarrassing! There are so many ways to flirt, and everyone thinks of flirting as something different. It really makes you wonder what is going on in their head.

[Read: The complete guide to decode guys and whether they like you or not]

Are they nervous and being quiet? Are they telling joke after joke? Or are they complimenting you or teasing you? All these things could be interpreted as flirting in some circumstances or just seen as normal, platonic interaction in others.

Not to mention, flirting doesn’t always mean what you think it does. A guy very well may be flirting with you but only wants to talk to you and is heading home to his girlfriend.

So, spotting the signs a guy is flirting with you takes insight, observation, and maybe even some embarrassment. [Read: 15 ways to tell if someone likes you without asking them]

The surest signs a guy is flirting with you

When a guy sweet talking you, whether you’re hoping he is or not, it is helpful to know some signs a guy is flirting with you.

#1 Body language. Body language is one of the most subtle signs a guy is flirting with you. It isn’t something you naturally pick up on without thinking about it.

If his arms are crossed at his chest he probably isn’t flirting. But if his body is open towards you, his feet are aimed in your direction, or if he is mimicking your body language, it is probably flirting. [Read: Does he like me? 18 ways to decode his body language instantly]

#2 Body contact. If you aren’t flirting with someone you wouldn’t touch them, would you? He may brush his hand again yours, be eager to wipe a strand of hair off your face or put his arm around you.

#3 He listens. A guy flirting with you is actually going to listen to you. Unlike a guy making small talk or just being polite, he will ask follow-up questions and fully emerge in the conversation.

#4 He’s blushing. Sure, maybe he is just warm, but most likely he is blushing because he is talking to you. If you give him a compliment on his looks or personality or even his accomplishments, he wouldn’t blush unless he wanted to impress you. [Read: 20 signs of attraction in the very first conversation]

#5 He’s nervous. Nerves go hand in hand with flirting for most people. Flirting is a form of putting yourself out there and saying you’re interested. Whether he thinks you’re stunning or endearing or even intimidating, he is probably nervous.

If he is sweating, fidgeting, playing with his sweatshirt zipper or straw wrapper, he is probably nervous. And that is sort of sweet.

#6 He teases you. Teasing has been a go-to flirting technique since kindergarten. When someone slightly insults you, it means they like you. I still can’t fully explain why, but I’m sure you’ve experienced it.

Usually, if you don’t like someone you won’t go out of your way to poke fun at them. If he mocks the way you pronounce a word, hold your wine glass, or that you love a different baseball team than him, he is likely flirting. [Read: 15 ways flirty friends tease and try to impress their friend]

#7 Eye contact. Eye contact really says it all. I rarely look people directly in the eye when talking to them unless there is some sort of connection. For instance, you don’t make eye contact with your cashier or bartender, but if you are flirting with them, making eye contact goes so much further than anything you could say.

#8 They overshare. Oversharing when flirting is partly due to nerves and something called word vomit. A romantic connection, even a brief one, can lead to trust.

When you are with someone you like, you feel comfortable opening up and have this natural urge to trust them. This could lead you to go into details about your childhood, your bladder problems, or even something much more personal. [Read: Is he attracted to you? 16 solid giveaways to watch out for]

There is nothing that says someone isn’t flirting with you more than them staring at their phone.

#10 They try to impress you. Whether they humble brag about their fancy apartment, killer car, or impressive CEO job, they are probably trying to impress you. Someone that is trying to get rid of your attention may talk down about themselves or be uninteresting.

#11 They compliment you. The classic flirting method, of course, is a compliment. Telling you that you look pretty or that sweater makes your eyes stand out or that you have a beautiful smile is a go-to when it comes to flirting.

More modern-day guys may compliment you on something beyond the physical like your taste in drinks, you work ethic, or your capacity to care for your friends or animals. [Read: How to tell what a guy really wants fro you – The guy decoding guide]

#12 He’s a gentleman. When a guy goes back to old-school traditions that include him being a real gent, he most definitely is flirting. Whether he pulls out your chair, offers to buy you a drink, opens the door, or even makes sure you get home safely, he is showing that he is not a slob but a stand-up guy.

#13 He doesn’t talk about other women. He may use foul language or drool over Scarlett Johansson when he’s with the guys or even his sister, but he is on his best behavior around you. A guy who is flirting with you and trying to impress you isn’t trying to make you jealous, he wants you to know his attention is on you. [Read: The subtle signs a guy likes you but is trying to hide it]

#14 He asks if you’re single. This is pretty obvious, unless he wants to set you up with his brother, he’s hoping to ask you out.

#15 You just feel it. Sometimes there is no clear sign a guy is flirting with you. You may not be able to see through his words or body language, but you just feel a connection. It could be the only sign you need.

[Read: The revealing signs that confirm he is flirting with you]

Now that you know the signs a guy is flirting with you, use them when you’re having a conversation and figure out what happens next!