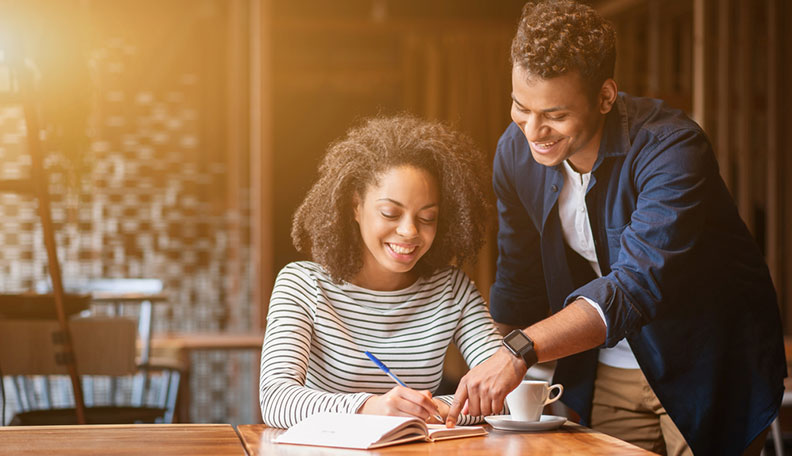 Getting mixed signal and wondering whether or not he actually likes you? Well, maybe you should be looking at the signs he is afraid to fall for you.

Men are exhausting. Honestly, they tell us that we’re the complicated ones? I don’t think so! When it comes to love, many men are simply terrified of the concept, causing a lot of unnecessary drama. But understanding the signs he is afraid to fall for you will help cut the drama out of your life.

Most women spend their time analyzing texts or situations that have happened with a specific guy, even when they know that the guy likes them. Why? Because men aren’t always upfront about their feelings.

Now, this isn’t to say all men are like this. But, every so often, you’ll run into a guy who’s afraid of falling for you, even if you are perfect together. [Read: 20 subtle signs a guy likes you but is trying not to show it]

The 15 signs he is afraid to fall for you

This can get confusing and exhausting because there’s a lack of communication between you. But, for men, once they feel a little out of control, they pull back.

Sure, he may really like you, but if he feels weak or emotionally irrational—he freaks out. And who knows, maybe he had a bad relationship in the past or mommy/daddy issues. You don’t really know where this fear comes from. But I know you want to figure out what’s going on so you can make a decision.

If he likes you, but he’s scared, then maybe it’s time for a conversation. If he’s just playing with you, then it’s time to move on. So, here are the signs he is afraid to fall for you. Because not all men know what they want. [Read: 13 signs he’s not playing you and is actually not interested in you]

#1 You feel it. I always say this because it’s true. If you feel it, then it’s probably true. Your intuition is strong and should never be ignored. Now, it doesn’t mean that he’s going to make a move; that’s a different story. If you feel like there’s something going on with him, well, you’re not wrong. [Read: How to make the first move on a guy: 15 creatively sweet ways]

#3 It’s all mixed signals. Usually, men who are afraid to fall for you, even though they like you, will give you a big mess of mixed signals. One day they’re hot. The next day, they’re cold. This is why many of us struggle with “reading the signs.” But that’s because they’re having problems understanding and accepting their own feelings. [Read: The mixed signals from a guy guide that all girls need]

#4 He’s checking you out. Maybe you didn’t think he was into you, but if you caught him eyeing you, well, there’s your sign. It’s an easy way to tell if someone is into you. You don’t stare at people you’re not attracted to, right? Exactly. If his eyes are on you, there’s a reason why.

#5 When there’s a moment to make a move, he freezes. There’s usually a moment when the two of you are looking at each other, and you feel that something is going to happen. At that moment, usually, something does happen. But he’s terrified, so instead, he freezes and will change the subject or leave. And this is clearly one of those strong signs he is afraid to fall for you, whatever his reason may be.

#6 He has a jealous side. When you talk about other guys in front of him, he gets a little jealous. Though he’ll never admit it, you know why he’s jealous. If he’s changing the subject or unable to control his feelings, well, he’s not pleased. But if he’s not making a move, then he has nothing to complain about! [Read: 30 wicked ways to make a guy jealous and win his attention]

#7 He’s touchy. He’ll hold your hand; he’ll kiss you and hug you. But then there’s a limit. You feel like he puts up a wall when it gets to a certain part. And that’s because he does. He doesn’t want you to get the wrong idea even though he’s clearly playing with you.

#8 He’s overprotective. Though he’s not admitting that he has feelings for you, he’s very protective. Not in an obsessive way, that’s a red flag. But, for example, he’ll walk you to your car or to your front door. Going that little extra mile shows you that he cares.

#9 He’s not taking it to the next step. If he really wanted to be with you, he would rush to take things to the next step. But instead, he’s turtle slow. He’s not in any hurry to turn your relationship serious. And this is because he’s afraid of his feelings and isn’t ready to be with you. In other words, he has some issues. [Read: 16 signs a guy likes you but is scared and uncertain of what to do]

#10 He can’t handle any future conversations. Maybe you brought up an idea to travel during the summer, and though he seems excited, he also looks like he’s freaking out. And that’s because he is. Yeah, he likes you, but he can’t handle it. He’s terrified.

#11 He never admits how he feels. Even if the world was about to end, he would never come clean and tell you how he feels about you. Everyone around you knows how he feels, but he’s still the last one to admit it. It’s not like you didn’t know already! [Read: 15 signs he thinks about you a lot even if he’s playing it cool]

#13 He’s silent about your relationship. When people ask you about your relationship with him, you blush, and it’s obvious how you feel. But when he’s questioned, radio silence. He knows how he feels about you, but he can’t bring himself to accept his feelings. So, instead of admitting his emotions, he does the opposite. [Read: 16 signs he’s irresistibly attracted and wants you bad]

#14 He’s all about the compliments. If a guy is always throwing compliments at you, well, you know he’s into you. But if he’s overdoing it, he’s not sincere. Usually, when guys compliment women, they’re testing the waters, seeing how she reacts. If he’s scared to fess up his emotions, then he’ll be heavy with the compliments. [Read: How to decode compliments and mine them for their true meaning]

#15 He’s always nervous. Some guys aren’t poised when they’re around a woman they like. Maybe he’s always fidgeting when you’re around him or sweating like a pig. Well, it’s a great sign he likes you, but it’s also a sign he’s completely terrified.

[Read: Baby steps to help a shy guy open up to you]

After reading the signs he is afraid to fall for you, what do you think? If he is, then what are you doing? It’s time to either confront him or move on.

PREVIOUSHow to Tease a Guy and Make Him Realize Just How Much He Likes You
NEXTSurprised? The Male and Female Mind During the No Contact Phase