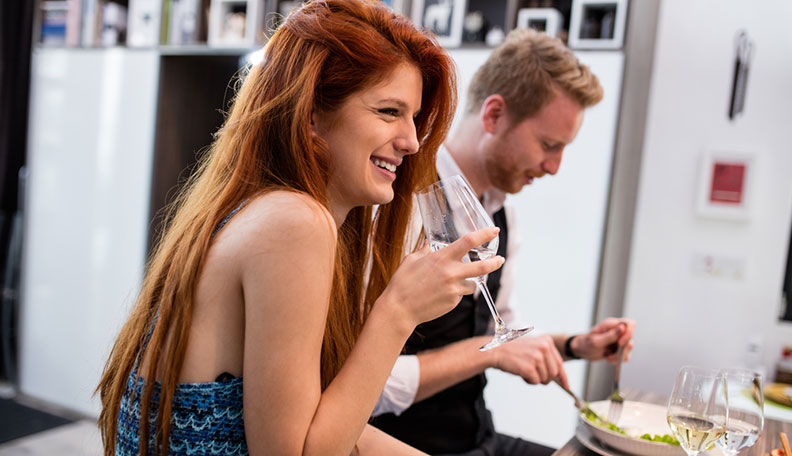 You think he’s into you. He’s giving off the right vibes, but why isn’t he making a move? Is he showing the signs he likes you but is afraid of rejection?

We all have those moments, talking to a guy, and think to ourselves, Wait, does he like me? And for a second, your gut instinct is telling you that you’re right. But, he’s giving you a weird vibe at the same time. This mixed signal only does one thing: drive us crazy. But have you considered the signs he likes you but is afraid of rejection?

I remember getting weird vibes from a guy, and I spent every day trying to figure out what he was thinking. Okay, he said this and smiled, but then he looked at me with a weird expression… what does it mean? You don’t need to explain anything to me. I know exactly how you feel.

But his weird vibes don’t necessarily mean he’s not interested in you. It could actually mean he likes you but is scared of rejection. Who would have thought that?

[Read: How to get the shy guy to ask you out]

At the end of the day, we all have our fears that make us behave in a specific way. So, figuring out why he’s acting like this will help you determine your next step. Should you make a move? Should you move on?

Well, before planning ahead, let’s figure out what’s going on. I’m going to show you the signs he likes you but is afraid of rejection.

Why are boys so complicated?

#1 You feel the chemistry. When someone likes you, you feel it. You may not be able to explain it, but deep down, you know exactly what’s going on. Don’t ignore those feelings because they’re probably right. If you’re feeling the chemistry between you and him, well, he’s probably into you. But something is holding him back—maybe it’s fear of rejection. [Read: How to tell if there’s serious chemistry between two people]

#2 He gives you the look. Oh, you know what I’m talking about. It’s the look. Men who are into a woman won’t be able to take their eyes off of her. Not in a creepy way, but they’re attracted to this person so they’re going to look.

#3 He’s nervous around you. When we like someone, we don’t want to screw up any encounter with them. So, instead of being relaxed, we get nervous and start to talk fast or stutter. When speaking to him, focus on how he acts during the conversation. Is he nervous? Stuttering when he speaks? Bragging about himself? [Read: Does he like me? 18 signs to decode his body language]

#4 He teases you. Now, he may be scared of rejection, but he’s into flirting and teasing you which is a great sign that he likes you. Now, the flirting could be very intense or playful. Regardless, it shows that he’s into you and that’s all you need to know.

#5 He’s open to touch. When someone doesn’t like you, physical contact will be limited. He won’t try to touch you, and when you touch him, he’ll tense up. Those are the signs of a lack of attraction. But if he’s into you, he’ll love it when you touch his arm or back when he makes a joke. He may not be touchy, but how he reacts to your touch can tell a lot about his feelings for you.

#6 He’s hot and cold. Being hot and cold could come for two reasons. Firstly, it could be he’s afraid of rejection. Secondly, it could mean that he’s not sure about you. He may like you, but he’s debating whether or not to make a move. In that case, move on. If he’s not sure, you shouldn’t wait for him to make up his mind. [Read: All the signs he’s not playing hard to guy but just playing you]

#7 He puts his phone away. Who would have thought this would be a sign. Well, it is. When we’re hanging out with friends, we’re still connected to our phones. But, if he likes you, he’ll put his phone away and won’t feel the need to look at it. Why? Because he wants to spend quality time with you.

#8 He focuses on spending time with you. If he isn’t interested in you, then he’ll see you when he sees you. He’s not going to go out of his way to make time for you. But when it’s someone he likes, he’ll make sure to make time to see you. That’s the big difference between interested and non-interested men.

#9 He’s all about compliments. If a guy isn’t interested in you, he won’t spend a second paying attention to your new haircut or the shirt you’re wearing. But for him, he’s all about the details. When you wear a new dress, he’s the first one to compliment you. When you smile, he tells you it brightens his entire day. [Read: 9 sneaky ways to get a guy to ask you out]

#10 He tries to impress you. That’s one thing you’ll notice when you’re with a guy who likes you. He’ll try as hard as he can to impress you. He may brag, show off his strengths and skills. In other words, he wants you to see he’s the man for you. [Read: How guys flirt – 15 signs he’s trying to impress you]

#11 His friends give you hints. When you hang out with his friends, they’re always teasing him about you two. Well, that’s a hint right there. On top of it, his friends will directly give you hints that he’s into you. They wouldn’t do that if they didn’t mean it. If they’re dropping hints, take them seriously.

#12 He’s jealous of other guys. When you’re hanging with other guys, he’s fuming with jealously. This only happens when a guy likes you. If he didn’t like you, he wouldn’t care how much you are with other men because it’s not his problem. But now, it is his problem.

#13 Everyone thinks you’re a couple. When you’re talking to other people, they all assume you are an item. People sense this from the energy shared between you. You thought people didn’t notice? Think again. [Read: Can a girl ask a guy out before he asks her out?]

#14 He’s told you he likes you. He may be scared to ask you out, but he’s told you how he feels for you. It may not be that direct since he’s scared it’ll probably be subtle and unromantic. However, you know what he’s trying to say. If he’s scared of rejection, he’s waiting to see your reaction before making a move.

[Read: Creative and sweet ways to make the first move on a guy]

So, after looking at the signs he likes you but is afraid of rejection, what do you think? If you think he likes you, maybe it’s time you made a move instead.

PREVIOUSSensuous Selfie: The Best Sexy Selfie Poses to Show Yourself Off
NEXTWhat to Do on a First Date to Make It Special and Super-Memorable