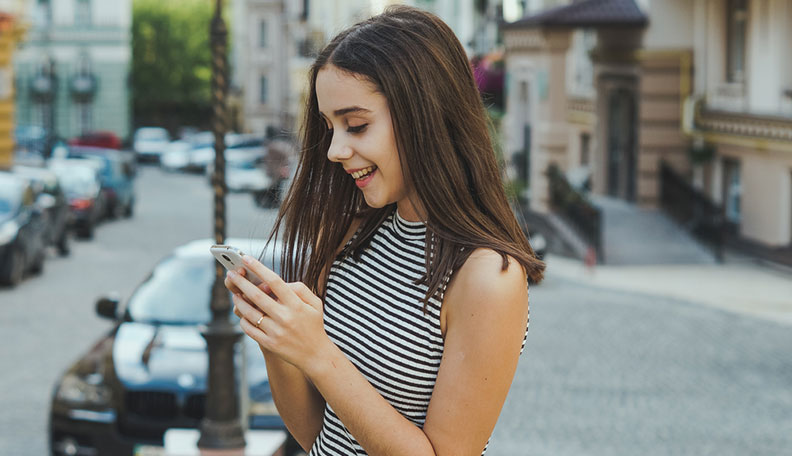 When it comes to knowing how to text a girl for the first time, too many guys get it wrong. Here’s how to leave her with good thoughts of you.

Let’s be real. Girls are on guard now more than ever before. Texting one in the hopes of leaving her with a great impression of you will not be easy. It’s time for men to step up their game when it comes to earning a woman’s affection. Learning how to text a girl for the first time will be invaluable to you.

Meaning, you need to take a few tips from someone who actually knows what girls want to hear. Because as much as you think your dick looks great on a screen, girls don’t want to see that and texting it to her with a nasty message will make her want to stay far, far away.

It’s not enough to just tell a girl she’s pretty and you liked talking to her the night before. We want more than that. In fact, we want you to actually make an effort. If we see you’re trying, you’ll earn more points with us.

If you act like we’re disposable and our number was one of like ten you got that night, you can kiss your chances with us goodbye. It’s less about trying to play it cool and more about showing her you actually want something with her.

Yes, that might seem like a big deal after just getting her number and texting her for the first time, but it’s true. If she gets the impression you don’t really care, she won’t even give you a second thought. [Read: 14 things women actually want in a man]

Now that we’ve established you definitely need help in this field, let’s get to it. If you truly want to make a great first impression and leave a girl wanting more with you, here’s how to do it.

#1 Make sure she gave you her number. Getting her number from another guy or one of her friends doesn’t cut it. It’s super creepy to get an unexpected text in that way and she’ll be really annoyed right off the bat. So if you want to text a girl, ask for her number yourself.

Yes, you could easily have a friend give it to you if they have it, but like I mentioned, it’s a horrible idea. You can also make friends with her on social media and start messaging there before asking for her number. Either way, it has to come from her. [Read: 10 no-fail ways to get a girl’s number every time]

#2 Keep it simple to start. You don’t want to start a conversation going into insane details about your life. This will feel like you’re coming on way too strong and that could potentially scare her away. Instead, just keep it simple and say hello. Ask about her day and let the conversation carry on naturally.

Ask her what she likes to do for fun and if she wants to do something like that for a career someday. Ask her how she feels about something important happening in the world. These will leave a much stronger impression on her. [Read: 60 meaningful get to know you questions]

#4 Keep any sex jokes to yourself. They’re not funny and you’ll creep her out. Girls don’t want to talk about sex right away when a guy texts them. If you try, she’ll think you only want her for sex and that’ll end any chances you did have with her. So keep them to yourself.

#5 But still make some jokes. On the flip side, you still want to make her laugh. So long as the jokes aren’t sexual in nature, she’ll be happy to laugh with you. Don’t make any demeaning or offensive jokes, either. Keep them in neutral territory and you’ll do fine. [Read: How to make a girl laugh and like you instantly]

#6 Let her lead the conversation at some point. You did text her and while it may be tempting to take over and ask a bunch of questions to get her talking, you need to let her have some of the floor too. This also helps you gauge her interest.

If she does take over eventually, it means you made a great impression. She wouldn’t want to keep talking if that wasn’t the case. So give her some breathing room to see if she’s interested.

#7 Ask about her hobbies. You always want to ask about what a girl likes to do for fun. And don’t let her give you the same old, “I like to watch movies.” Instead, press her a little bit here and ask if she has any interesting hobbies. This will feel like a little challenge and she’ll feel the need to confess.

This will leave a great first impression simply because you might get a secret out of her. If you’re cunning enough to do that, she’ll want to keep talking to you. [Read: 25 flirty questions to ask a girl you like]

#8 Compliment her intelligence at some point. Girls are bored with compliments of their looks. Although it’s nice to know when a guy finds us attractive, we also want to be recognized for more than that.

If you really want to know how to text a girl for the first time and leave her thinking about you, tell her you like how her mind works. That’s enough to make her want to talk to you a lot more.

#9 Stay playful and flirty. Don’t let the conversation get all too serious. It’s okay to discuss touchy topics here and there, but keep the mood light somehow. This will make her see how positive you are and that’s always an attractive quality. [Read: How to tease a girl over text and get her to flirt back]

Give her an opportunity to ask you something. The conversation has to work both ways. This also makes it feel less like an interview and more like two people getting to know each other.

#11 Use some emojis, for goodness sake. This just lets her know you’re goofy. In order to keep things light and interesting, use some nicely placed emojis and emoticons. You can really make her laugh if you know just how to use them well. [Read: Funny emojis everyone needs to use more often]

#12 Leave her wanting more. Don’t just end the conversation by asking to hang out. Tell her you have to go but would love to chat later. And do this toward the end of a great conversation.

Yes, it might frustrate her a little, but in a good way. She’ll be dying to text you back later and she will. That’s the kind of impression you want to leave her with.

[Read: How to text a girl you like and make her want you]

Knowing how to text a girl for the first time without screwing it up is extremely important. It might help you connect with someone you’ll be truly happy with.