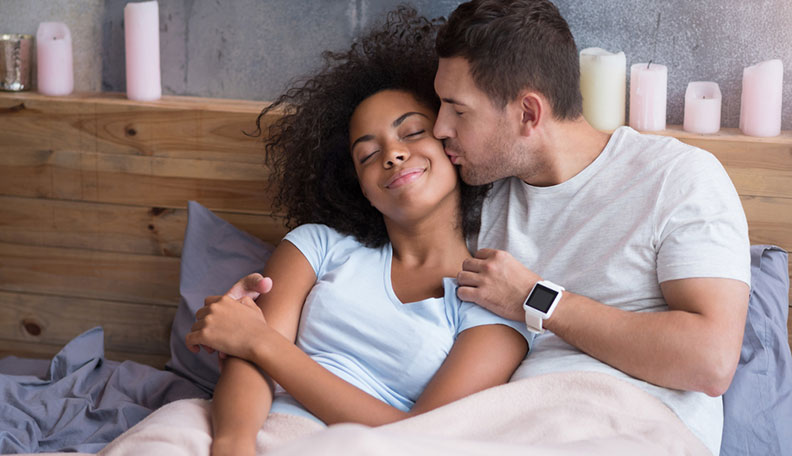 You’re madly in love, but sometimes you catch yourself wondering how to tell if your boyfriend loves you too. By looking at the signs, you’ll know.

He loves me… he loves me not… wait, he probably loves me… he has to love me, right? I know exactly how wondering how to tell if your boyfriend loves you feels. And it’s a nerve-wracking experience.

You’re there giving him everything while at the same time, you’re wondering if he even feels the same way. Deep down you know how he feels. When you start looking at the signs and paying attention to your intuition, you know what’s going on.

How to tell if your boyfriend loves you

When it comes to people, specifically men, you can never really know what they’re thinking. A guy can tell you he loves you and not mean it or not tell you anything and secretly love you for years on end.

Ideally, just ask him how he feels about you, but I know how scary that can be. So, instead, why not look at how to tell if your boyfriend loves you? [Read: 25 signs he loves you even if he doesn’t say it out loud]

There are only so many signs a person can give you to show that they love you. All you need is to look at the right signs for a hint about what’s going on in their mind.

It’s time to find out how to tell if your boyfriend loves you.

#1 He told you. Of course, some people just say ‘I love you,’ when they feel any positive emotion. And they may not necessarily mean it. But, if he says it and you truly feel that it’s genuine, then you’re not wrong. You have your intuition and trust me, you should listen to it. [Read: All the signs he wants something serious with you and is ready to commit]

#2 He checks up on you. Listen, when it comes to the human race, we’re pretty selfish. We put ourselves first and make sure we’re taken care of. But, when we’re in love, things change. Yes, we’re still a priority, but now, there’s someone else who’s equally as important. If he’s checking up on you throughout the day, it’s because he cares and worries about you.

#3 He lights up when he sees you. When he sees you, his face completely changes. It’s like you instantly bring sunshine into his life.

#5 He gets into your life. He’s in your life. He knows all your friends and family, he goes to every dinner, he even will attend your brother’s soccer games on the weekends. In other words, he’s making sure he has a strong presence in your life. If he’s making this much effort, it’s not just to get in your pants.

#6 He goes out of his way for you. Maybe he already had plans or has been busy at work, but he’ll rearrange things around just to get a chance to see you. Whether he sees you for a couple of hours or minutes, he will go out of his way to spend as much time with you as possible. What do we call that? It’s love, baby.

#7 He treats you as a priority. We usually put ourselves first before other people. And, let’s not be naive, he still puts himself first, but he also prioritizes you. When he’s making decisions, he includes you in them, making sure you are on the same page. This is because he loves you.

#8 He genuinely listens to you. When he asks you about your day or any question regarding your feelings, he listens. He doesn’t just ask it to fill time, he’s asking you because he genuinely wants to know how you’re feeling. A man who loves a woman is a man who cares about her feelings and all the small details happening in her life. [Read: 17 gestures that are louder than words when it comes to love]

#9 He doesn’t give up. It’s normal for couples to argue and disagree on things, but that doesn’t mean the relationship is supposed to end. Whatever problems you’re having, he doesn’t throw the towel in and call it quits. He puts 100% into the relationship every single day and never doubts that you two are going to make it.

#10 He asks for your opinion. But not only on simple questions like “does this shirt look good on me?” or “should I get the new iPhone?” I’m talking about real questions, questions regarding his job, family, or friends. If he consults you before making a decision, he respects your opinion and values what you have to say.

#12 He introduces you to his family. Let’s not ignore this one. Okay, if you met his family once, then don’t assume he’s madly in love with you. But if you see other signs and notice he’s taking you more to see his family, then he’s clearly developing some strong feelings for you. He wouldn’t be bringing you into his close circle unless he felt you were the one. [Read: How to charm your boyfriend’s parents when you meet them]

#14 He sees you. When a guy doesn’t love you, he doesn’t really see you. Okay, he sees you in the literal sense, but he misses the small details like the way you laugh or the face you make when you’re sad. When a man is in love with a woman, he notices everything. And when I say everything, I mean everything.

#15 He misses you when you’re not around. Whether it’s for five minutes or a couple of days, when you don’t see each other, he’s sad. Typically, men fall in love with a woman when she’s not around. You know the saying, absence makes the heart grow fonder.

If he’s always texting or calling you when you are apart, he probably can’t get enough of you. [Read: The 14 signs a guy really does miss you]

#16 He focuses on making you happy. What could say love more than this? If his main goal is to make you happy, he clearly loves you. No man would waste their time making sure someone is happy unless he truly cared about the person. If you’re doing something that makes you unhappy and you tell him, he’ll change it right away.

[Read: How to know if your boyfriend loves you back]

So, you now know how to tell if your boyfriend loves you. If your man is displaying a few of these signs, it looks like he loves you for real.

PREVIOUSNarcissist and Empath: Why They’re a Match Made in Dating Hell
NEXTHow Not to Catch Feelings for Someone When All You Want Is a Hookup