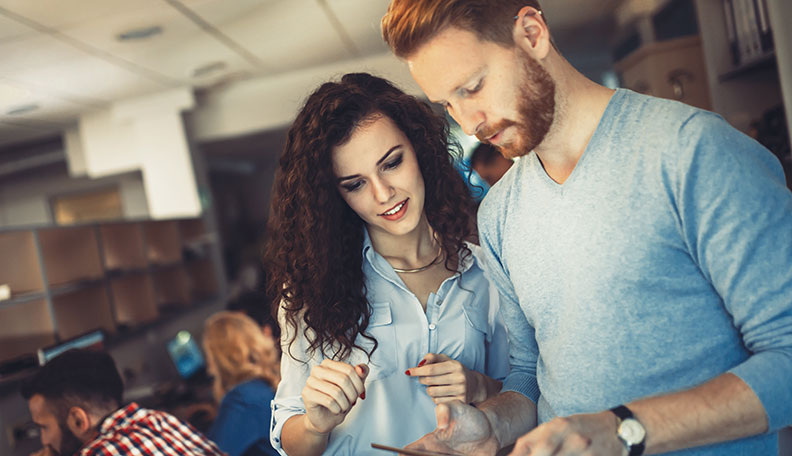 When it comes to knowing how to flirt with a guy at work, it may seem like you either have it or you don’t. But it really isn’t as hard as it seems.

I’m a natural-born flirt. Most of the time I don’t even realize I’m behaving flirtatiously. In fact, it takes so much energy from me to behave in a non-flirtatious manner. And not every woman knows how to flirt with a guy at work.

Some women are naturally flirtatious, while others are not. Neither is good or bad, it just is what it is. Now, being flirtatious can have its downsides, especially when you’re not necessarily trying to flirt with someone. I had my fair share of, “oh… you thought… hmm… well, this is a little awkward,” moments.

But if you’re trying to learn how to flirt with a guy at work, then this isn’t your problem.

[Read: Avoid these flirty moves that girls think are cute but guys hate]

How to flirt with a guy at work

You’re here to learn to flirt. Maybe you have your eye on the delivery guy or another colleague, and you want to engage in a flirtatious conversation. I totally get you. You want to see where it’ll go or just have fun flirting with someone at work.

Now, I should warn you, though I love flirting, make sure you don’t mess up your working environment. Flirting with someone can be fun, but if feelings develop, and things don’t end well, it could make things very uncomfortable for you. So, just keep that in mind before you make any moves.

Learning how to flirt with a guy at work is not as hard as it seems.

#1 Just relax. You’re probably nervous to flirt with someone but just chill for a second. You’re not asking their hand in marriage, just a conversation with them. That’s basically what flirting is. It’s a conversation with a sexual tone to it. They can decide whether or not they want to flirt back; if they choose to, it’s a good sign. So, why freak out about it? [Read: The socially awkward person’s guide to flirting]

#2 Dress to bring out the confidence in you. A lot of people get confused and think they need to dress “sexy” to exude confidence, but that’s not true. You should dress in a way that makes you feel comfortable and confident. If not, you’ll feel insecure about your looks and won’t be able to relax and engage in conversation.

Being confident doesn’t mean dressing sexy. Being confident means wearing clothes that make you feel good. [Read: How to dress sexy – A guide every girl must know]

#3 Pay attention to your body language. If you approach him with your arms crossed and a giant frown on your face, it’s not saying, “Hey I’m into you, let’s talk.” Rather, it’s saying, “don’t say anything that’ll piss me off or I’ll punch you in the face.” Body language is the primary way we communicate, so present yourself in an open and friendly way. Shoulder back, head up — look approachable. [Read: How to get your crush’s attention with smooth ways to catch their eye]

#4 Let him engage in conversation. Flirting is a two-way street. Both of you need to engage in the conversation if you want there to be any flirting. You can’t be the only one doing all the talking. So, if he’s flirting back, give him the space to do so. Let him talk and open up to you about his life. Within the conversation, if things go well, you will be flirting naturally.

#5 Don’t force it. You know if there’s chemistry between you and another person, you can feel it. If there is, flirting will come with time. But if you’re trying to force something on someone who doesn’t feel the same for you, it’s going to be very uncomfortable. If it feels right, go for it. If not, don’t force it. [Read: How to tell if there’s serious chemistry between two people]

#6 Tease him. If you’re not used to teasing people, it’ll take some time to get it right. Teasing is a great way to flirt with someone, but can also do a lot of damage.

You’re trying to light tease him, not bully and insult him. If he says a joke and it’s not funny, you can tease him about it. Lightly poking him is fine, just don’t cross the line. No one likes being insulted.

#7 Give compliments. Listen, you don’t want to shower him with compliments, it’ll come off as forced and cheap. Compliments should be given when they’re deserved. If you see an opportunity to compliment him, then do so. Everyone likes being acknowledged, it makes them feel good. If he has a new haircut, mention it. He’ll take notice you’re paying attention to the small details. [Read: 25 compliments for guys they’ll never ever forget]

#9 Make eye contact. We undervalue the power of body language, but it’s crucial. Eye contact is a very important part of how we communicate with other people. You can see exactly what a person is thinking when they look at you. Don’t be afraid to engage in eye contact, and flirt with your eyes. [Read: How to be a tease with these irresistible flirty moves]

#10 You can lightly touch him. I know you want to rip off his clothes, but you’re not there yet. Flirting is about building sexual tension with someone, so that’s the phase you’re in right now. When he tells a funny joke or you’re telling him a story, lightly touch his arm. Physical contact subconsciously shows someone’s interest in another person.

#12 Be subtle. You’re at work, not at a club or a bar. So, how you would normally flirt needs to be taken down a notch at the office. You cannot be overly sexual when you’re at work. So, keep that in mind when you’re flirting with a co-worker. If you’re going to flirt, be subtle and keep your professionalism. [Read: How to subtly flirt with a coworker and gauge how they feel about you]

#13 Read his body language. If you’re noticing when you’re flirting with him that he’s stepped back, is looking away, and not engaging in eye contact, he’s either terrified or not interested. So, if you’re seeing these signs, take a step back. It may be hard to accept, but not everyone is going to be interested in flirting back with you.

#14 Decide who you’re going to flirt with. Of course, you can flirt with as many guys as you want, no one is telling you not to. But when you work in an office, you should be mindful of the environment. Flirting with one guy is fine, flirting with three or four, can cause some problems. Some people may take that as if they’re being played, and it could cause some office drama. [Read: How to be charming and liked by everyone]

#15 Practice. The first time you speak with him, you’re going to be so nervous. There won’t be much flirting going on, and that’s okay. But, the next time you two speak, you’ll be more relaxed and the conversation will flow better. With time, you’ll feel more comfortable to behave flirtatiously; it’s really all about practice.

[Read: The 17 best flirty conversation starters to get your flirt on]

Flirting is an art, but like any art, it’s entirely learnable. If you want to know how to flirt with a guy at work, simply follow these steps.