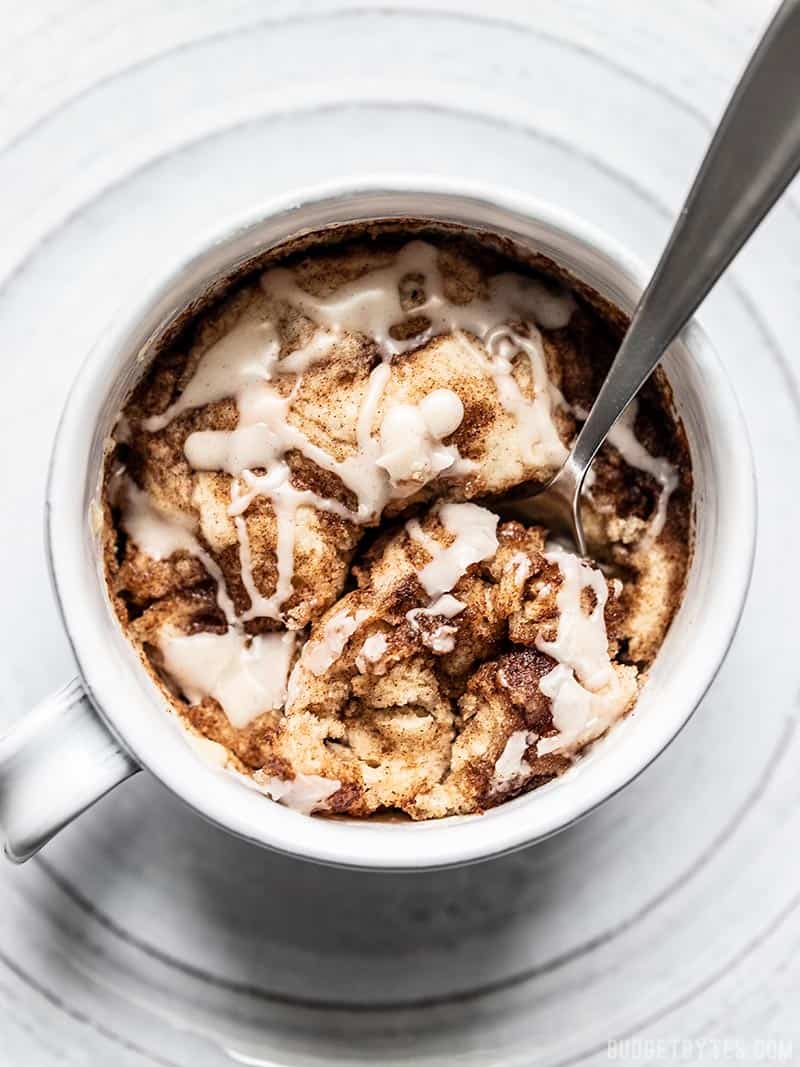 Mug cakes certainly aren’t for everyone, but if you’re the type of person that doesn’t like to keep sweets on hand, but does have the occasional sweet craving, mug cakes are the perfect single-serving fix. They take just enough work that I’m not tempted to make them ever day, but they’re certainly easier than making a whole dessert or going out to buy a single portion of something. They do also require a pantry stocked with basic baking ingredients, like flour, sugar, baking powder, etc.

Do I Have to Use a Microwave?

Yes, this recipe is designed specifically for the microwave. Ovens cook at a much slower pace, so this recipe would have to be tested and adjusted to compensate for the difference. Unfortunately I have not tested this recipe for conventional ovens.

Can I Use Non-Dairy Milk?

Because the milk is such a small quantity in this recipe, I do think you could get away with using a non-dairy milk, like almond or soy. You may also be able to use a non-dairy butter substitute as well, as long as it does not contain too high of a percentage of water. I have not tested this recipe with either of these non-dairy ingredients, so this is just my best guess.

Take the pricing breakdown below with a grain of salt. This recipe uses super small quantities of ingredients that already cost pennies at normal volumes, so the calculations are definitely more in the range of a general estimate. 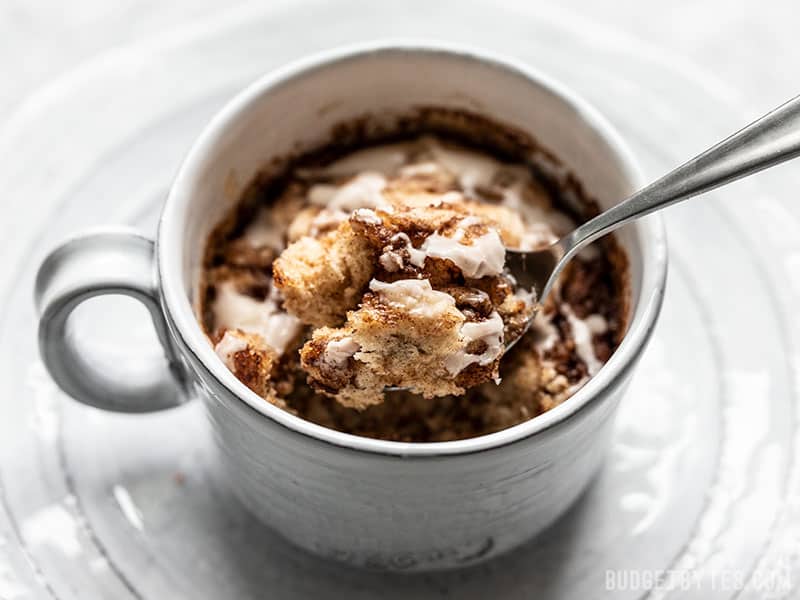 This Cinnamon Nut Swirl Mug Cake is the perfect way to get a single serving cinnamon roll fix without any kneading, rising, rolling, or baking! 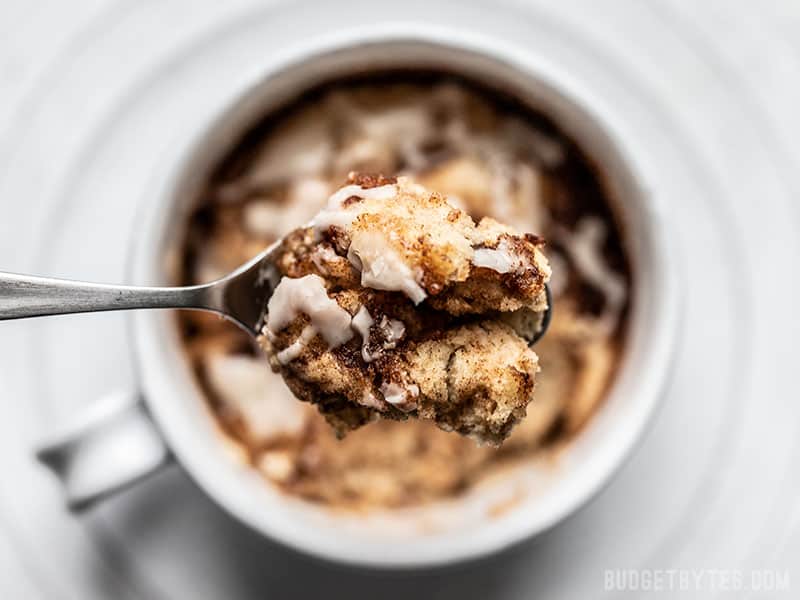 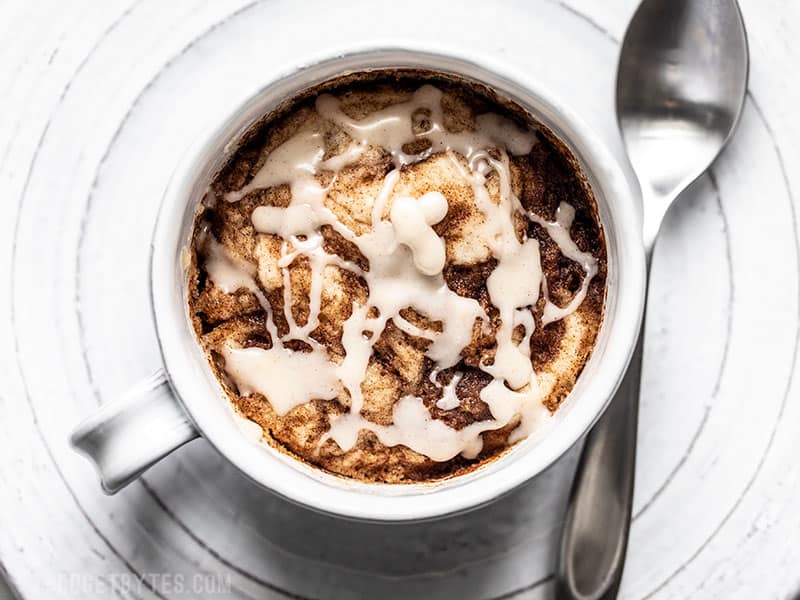 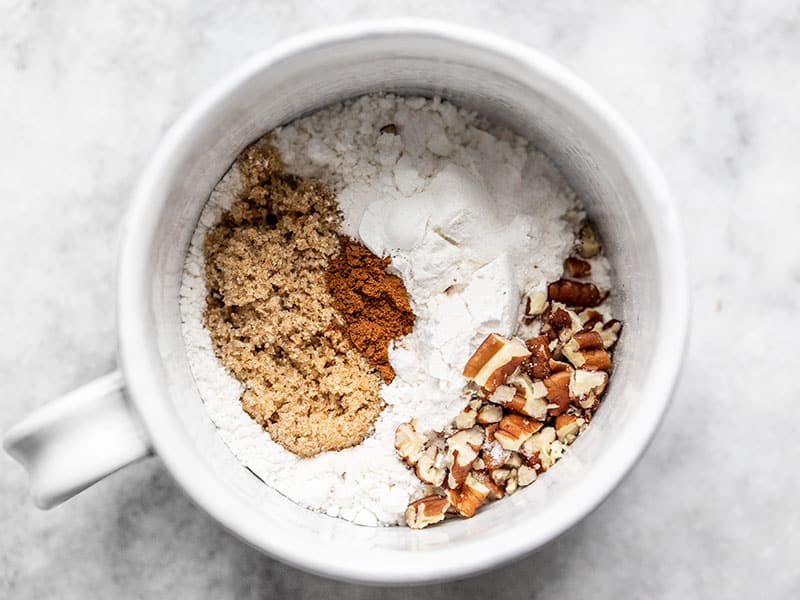 Start by adding the dry ingredients for the mug cake batter to a small mug (about 1 cup volume): 1/4 cup all-purpose flour, 1 Tbsp brown sugar, 1/4 tsp baking powder, 1/8 tsp salt, 1/8 tsp cinnamon, and 1 Tbsp chopped pecans or walnuts. Stir these ingredients together until they are well combined. 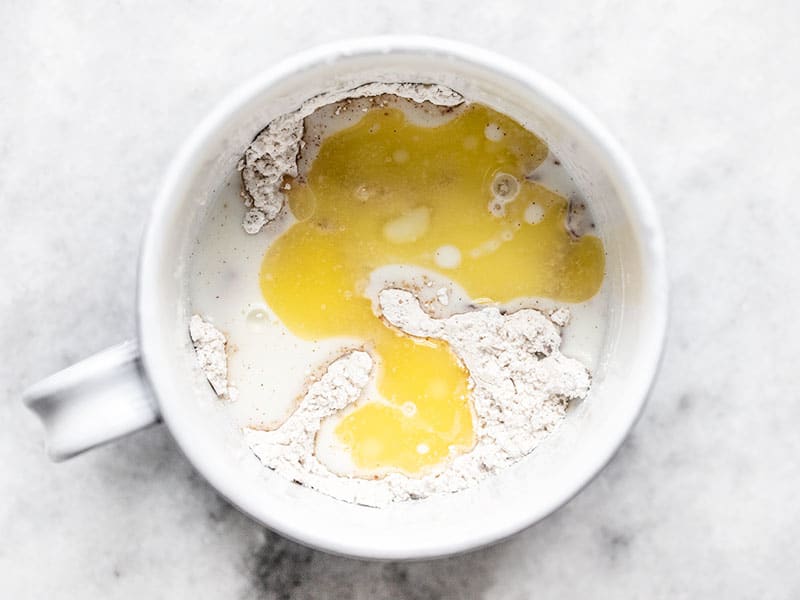 Next, add 1/2 Tbsp melted butter (microwave butter for about 15 seconds in a separate bowl) and 2 Tbsp milk. 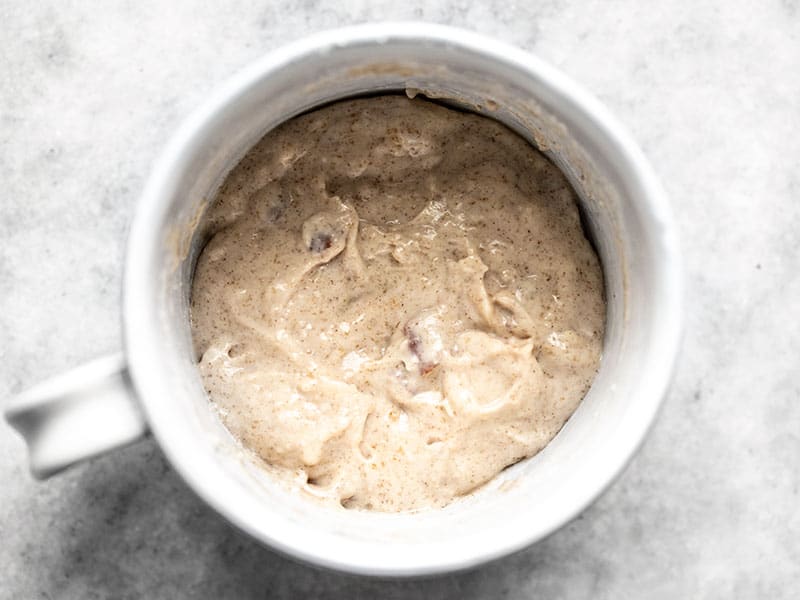 Stir the wet and dry ingredients together until they form a thick batter. 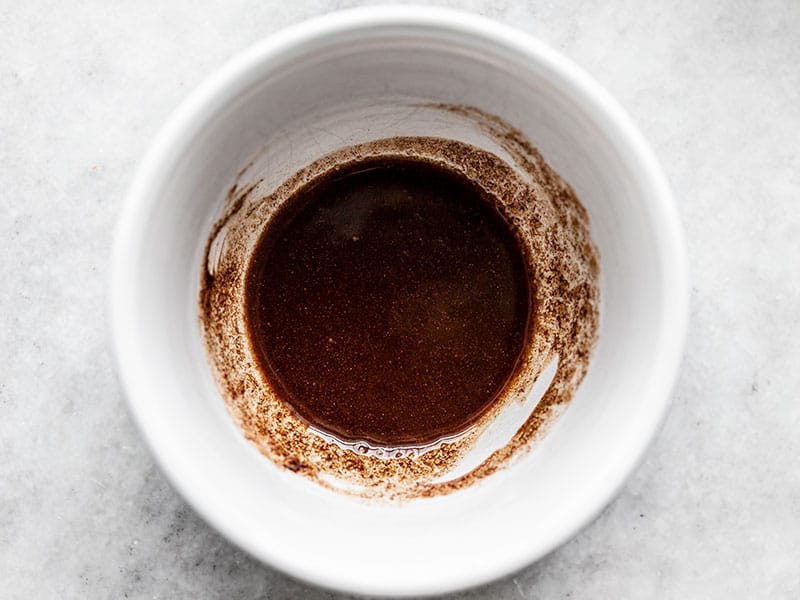 In a separate small bowl, melt another 1/2 Tbsp butter (microwave 15 seconds or so), then stir in 1 tsp brown sugar and 1/2 tsp cinnamon. This is the cinnamon butter swirl. 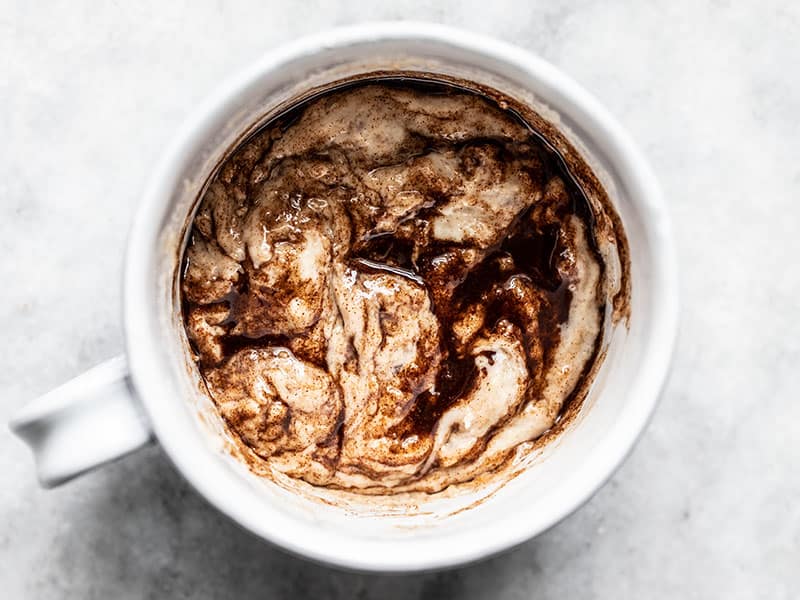 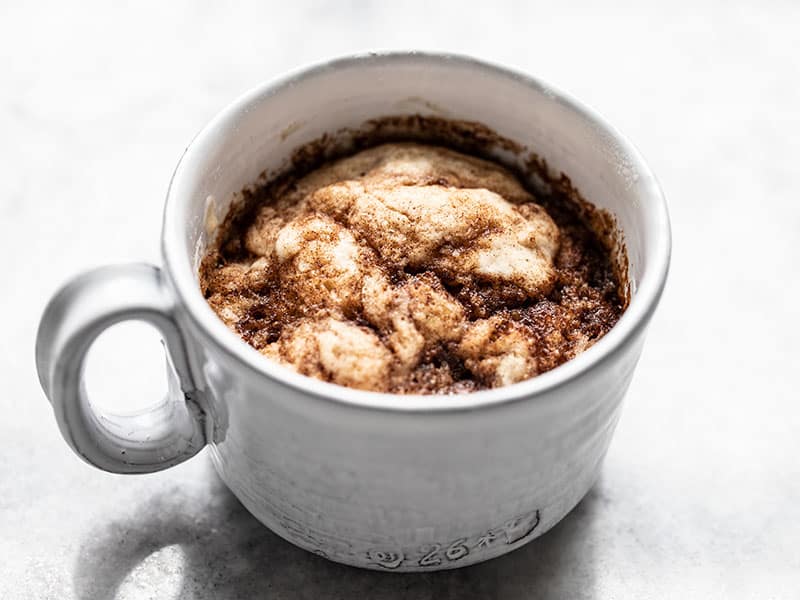 Microwave the mug cake for 45-55 seconds (this is the time for an 1100 watt microwave, your time may vary with the wattage of your microwave). The mug cake will steam quite a bit as it cooks, so don’t be alarmed. Let the mug cake cool for 1-2 minutes.

While the mug cake is cooling, make the icing. Use the same bowl used to make the cinnamon butter swirl. The residual cinnamon in the bowl will flavor the icing. Stir together 1 Tbsp powdered sugar with 1/2 tsp milk until a thick icing forms. 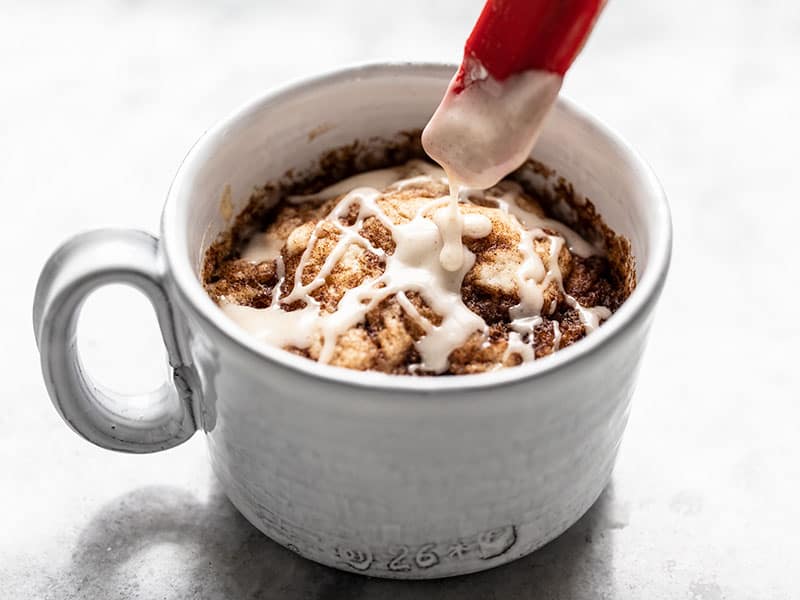 Drizzle the icing over the Cinnamon Nut Swirl Mug Cake. 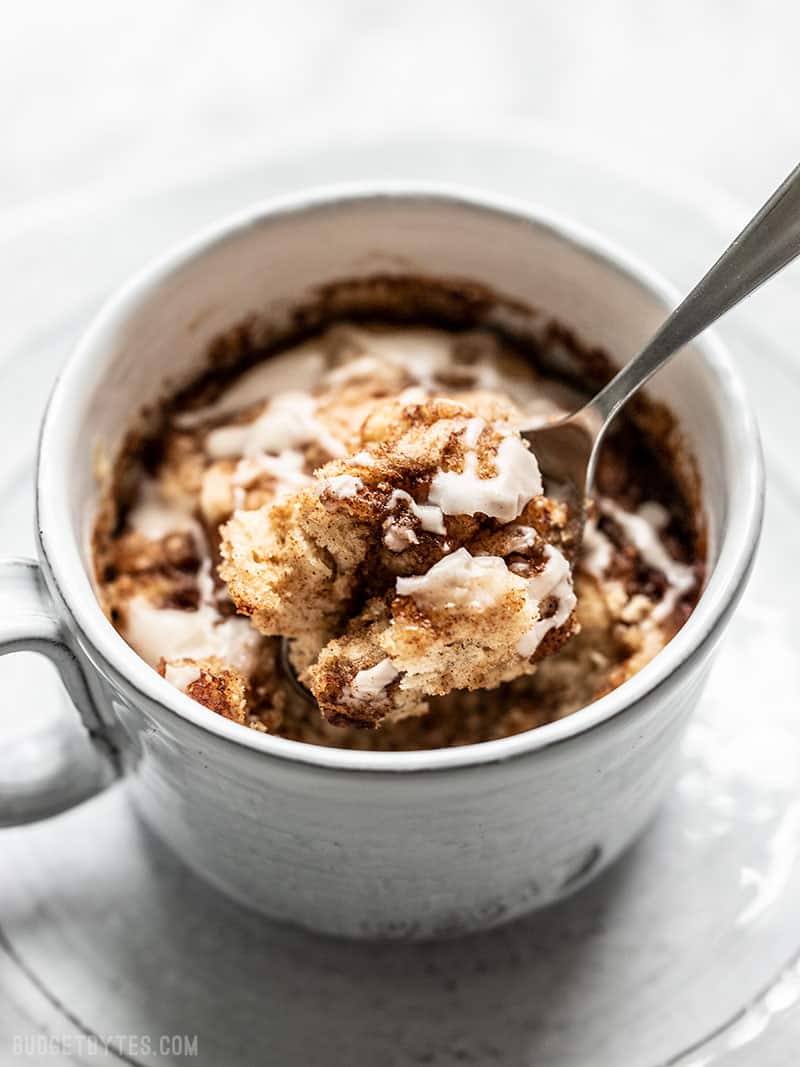