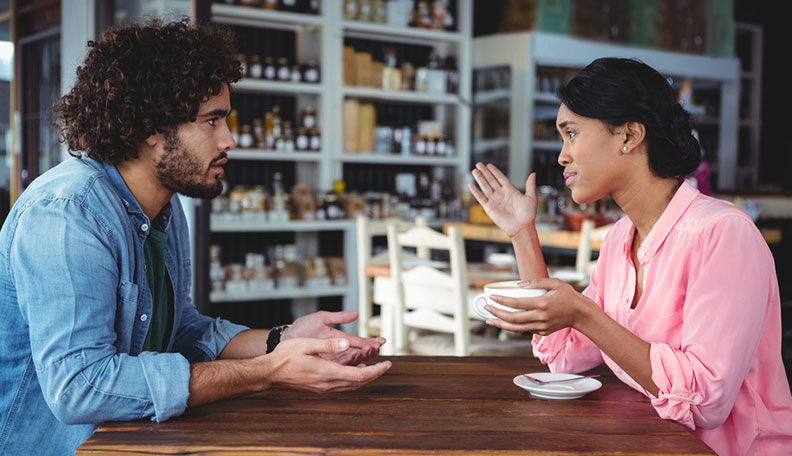 You may be skeptical, thinking your partner is cheating. Well, if they feed you one of the things cheaters say when confronted, you know what’s going on.

If you found out your partner cheated on you, they’re going to tell you everything they need to in order to keep you around. They’re insecure. Sure, they may have feelings for you, but they also don’t want to be alone. Don’t fall for these things cheaters say when confronted.

I know, it sounds a little harsh, but this will save you from being cheated on again and again and again. Now, cheaters aren’t that creative, they know exactly which lines work to get you to stick around, so, if you know what the lines are, you’ll beat them at their own game. [Read: 18 ingenious ways to catch a cheating partner in the act]

Listen, I’m going to be dead honest with you. In my early twenties, I cheated on my boyfriend. I wasn’t sure if I wanted to be with him. There were some unresolved issues but instead of breaking up with him, I stayed with him because of insecurity. But at the same time, I was dishonest and went behind his back in order to feel better.

Now, I can’t say the phrase, once a cheater, always a cheater is true. Since then, I haven’t cheated in any other relationships. I broke it off instead. I’m aware that many cheaters do end up cheating again. Regardless, once someone cheats on you, you need to break it off. Here’s the list of bullshit they’ll tell you.

#1 It was purely sexual. I don’t have feelings for them. The classic, it was just sex, it meant nothing excuse. How many times have we heard this one, right? By the sound of this, they’re saying sex isn’t important, so, if that’s the case, then why did they sleep with someone else? Just because they didn’t like the person they slept with doesn’t mean they didn’t cheat. [Read: How to repair the damage of someone cheating on you]

#3 I’ll change, I promise. Everything will be better. Let’s get real here, they’re not going to change and things won’t get better. Sure, they seem better, but the root problem hasn’t been dealt with at all. Plus, once they cheat on you, the damage has already been done. [Read: How to break up with someone no matter the situation]

#4 You’re never around anymore… Listen, you may have had to work later or have been busy with your kids, whatever. Life sometimes puts us in exhausting phases. However, that isn’t an excuse for someone to cheat on you.

This is one of the things cheaters say when confronted, because they don’t want to take responsibility for their actions, and want to throw the blame on you instead. If they were mature, they would address their feelings to you about their struggles.

#5 I was abused. This line is so stupid that it actually works on people. If someone starts bringing up their past, talking about how they were abused, and the connection to them cheating, well, it’s a good story. We all know this has nothing to do with the cheating. These are two different things, and they use their trauma as an excuse. [Read: Confronting a cheater who uses the victim card]

#7 I’ll never do it again. Remember what I said, they may never do it again, but they won’t stop cheating on you. They’re not fully invested in the relationship and that’s not going to change because they don’t feel the same way as you feel about them. At the end of the day, if they had the opportunity to cheat on you, they would.

#8 They seduced me! Naturally, it takes two people to tango. They’re going to tell you that they were seduced. If this person has a cheating past, then they know what to say. This line will make you second-guess their actions, but don’t fall for it. They’re responsible for their own actions, not the other person.

#9 I love you, but not in love with you. Another classic that cheaters can’t get enough of. This actually doesn’t have anything to do with you or them suddenly realizing that they don’t love you.

They knew all along that they didn’t love you, but they were too much of a coward to do anything about it. They use their actions as a way to get rid of you.

#10 It’s all in the past. I’m a new person. Suddenly, they’re a changed person. You found out they cheated and now, they’re pure, relieved from all sins they’re committed. It’s a sweet story but let’s get real here, they’re not a new person. And even if they don’t cheat again, they’ll somehow find a way to disrespect you because they don’t respect you in the first place. [Read: Should you ever forgive a cheating partner?]

#11 I’m sorry. Of course, they’re sorry! They’re sorry that they got caught. Everything was going fine before you found out. If they were truly sorry, they would have stopped cheating a long time ago, but clearly, they were having too much fun. Make sure you ditch them after they give you this sappy story.

#13 They understand me in ways you don’t. Ah, yes, the person they’re having an affair with understands them in a multitude of ways that you don’t. And you know what, that could very well be the case. If it is, they should go be with them. Everyone gets a little bored in the relationship from time to time, but that doesn’t mean the answer is to cheat.

[Read: The reasons why a cheater can’t help themselves]

If you think your partner is cheating or you caught them red-handed, then you’ll probably hear these things cheaters say when confronted. Don’t fall for it!