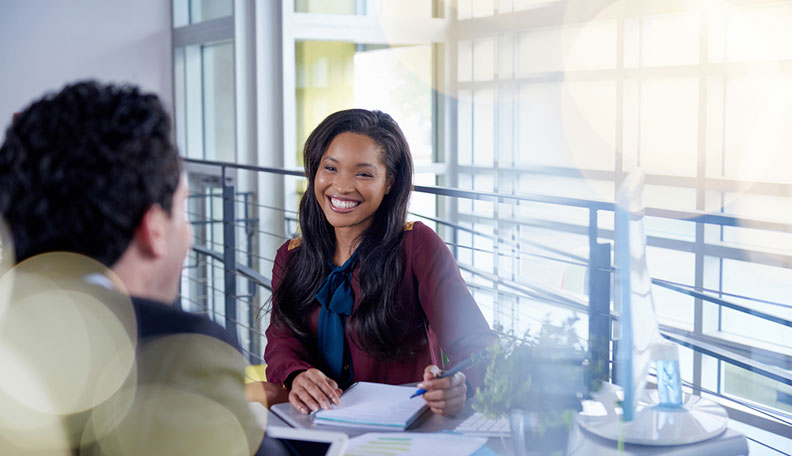 Learning to tell if a co-worker is into you is as simple as learning the signs of flirting at work. Now, are you going to flirt back or shut it down?

When you’re working with other people, you naturally build relationships with them over time. These are people you literally see more than your family or partner. So, how can you not get to know them? Sometimes romance blooms in unexpected places, and understanding the signs of flirting at work can help you know if they’re just being friendly or want something more.

The must-know signs of flirting at work

Sometimes getting to know your co-workers can turn into something more. Outside of the office, it can be easier to tell if someone is flirting with you. But at work, there are unspoken rules. One of them being not to flirt or date co-workers.

And I get the reason why those rules are in place, but at the same time, we’re only human. At work, people try hard to cover up their emotions and hide their feelings for co-workers they’re interested in.

[Read: How to handle a co-worker crush like an adult]

And that can be annoying, especially if you are interested in them as well. So, of course, you want to know what the subtle signs are, it could be your chance to connect with someone you have feelings for. It’ll save you a lot of time trying to figure out what’s going on.

If you realize they’re not flirting with you, you can move on. And if they are flirting with you, well, this is great news. Now you can make a step forward. I know, I know, you shouldn’t date people you work with, but at the same time, you only live once. Just as long as you know the consequences if it doesn’t work out and can handle them, then go for it. Who knows what could happen? [Read: How to flirt at work while keeping it harmless and fun]

It can be tough to tell, but these signs of flirting at work will shed light on the situation.

#1 You feel it. What can I say, when it comes to intuition, follow it. Your gut may be wrong sometimes, but that’s very rare. If you have the feeling that your co-worker is flirting with you at work, then you’re probably right. Of course, the rest of these signs will help you come to a final decision. You may think, “but they’re married,” but listen, married people flirt as well. [Read: How to listen to your gut and give strength to your inner voice]

#2 Small, minor touches. You can never tell if they touch you on purpose or if it’s an accident. Since they’re your co-worker, they’re not going to be obvious with their actions. They may touch your arm, brush by you, pat you on the shoulder. But they wouldn’t be touching you unless they’re trying to communicate with you.

#3 Their behavior changes when they’re around you. Your co-worker may not openly be flirting with you, but that doesn’t mean they’re not flirting with you. If they become more chatty, tell more jokes, or become nervous around you, it’s a sign that they’re interested in you. If their behavior changes right when they’re around you, that’s a sign. [Read: The 13 clear signs you’ve got a work husband or wife]

#4 They’re always there. Whether it’s when you’re on a break or just walking around the office, it’s like they’re always there. Do you think that’s by chance? Not likely. If anything, they’re trying to line themselves up to bump into you or just see what you’re up to.

#5 They are eye contact heavy. Whether you’re at work or at the bar, eye contact is a great way to see if someone is interested in you. Eye contact is super flirty and in this case, is one of the indisputable signs of flirting at work. If someone is looking at you for longer than normal, giving you a smile – they’re flirting with you. But if they’re looking away from you, don’t be fooled; they’re not interested. [Read: Prolonged eye contact flirting – What it means and how to do it]

#6 They mention their weaknesses. This may sound a little strange, but not if you think about it for a second. Sure, it’s not the most desirable way to get someone’s attention, but it works. If they’re pointing out their weaknesses to raise awareness to your strengths, that’s a form of flirting.

#7 They are on your social media. Now, many of our co-workers are on our social media, so this isn’t a sign. But what is a sign is that they’re constantly liking everything you post. Maybe they’ll even make a comment as well. Social media is a great way to see if you’re on someone’s radar. If they take the time to check out your social media, it’s a sign. [Read: 15 subtle clues to know if your crush likes you back]

#8 They’re excited to see you. Okay, they’re not jumping up and down in joy, but when they see you at work in the morning, you can see their eyes brighten with joy. Oh, they’re happy to see you, that’s for sure. If your co-worker shines like the sun when you talk, they like you.

#9 They laugh at your jokes. For them, you’re the funniest person on earth. They’re always laughing at every joke you make, whether a good one or not. Sorry, we all make bad jokes from time to time! But no matter what, they give your joke a chuckle or giggle. This is an obvious sign they’re flirting with you.

#10 They want to hang out outside of work. Yes, you have a nice relationship at work, but they want to take things outside of the office. Maybe they invite you to a concert during the weekend or for drinks on Friday, and this is a sign they want into your life. They want to be more than just a co-worker. [Read: How to know if you have a real crush on a workplace colleague]

#11 They get you coffee. I know this may sound rudimentary, but don’t be fooled by this kind gesture. If your co-worker gets you coffee every morning, just the way you like it, well, they like you. No one invests their time bringing a co-worker coffee unless there’s a reason why.

#12 They ask questions about your personal life. With co-workers, you’re friends with them, but it takes time before you learn about their life. And even then, they usually don’t know personal details about you. But if your co-worker asks you questions about your relationship status, etc., then it’s a sign they’re scoping you out.

#13 They defend you at work. Maybe you made a mistake at work, or another co-worker has been spreading rumors behind your back. Well, they’re not going to let that slide. Instead of going along with it, they defend you. Now, maybe they’re the type of person who would do that, or maybe they like you.

#14 They help you with work. Maybe you’re swamped with work to do, but don’t worry, they help you out. Now, let’s get real. Why would anyone want to do extra work? Exactly. No one wants to do that. So, if someone offers to help you out and has shown these other signs, they like you.

#15 Suddenly, you have matching work schedules. This one may be a little weird if you’re not into your co-worker. But if you are interested in your co-worker, then it works out quite well. Anyways, if suddenly you have matching schedules, something happened on their end. This isn’t chance; it shows they’re into you. [Read: The lusty signs a co-worker is sexually attracted to you]

#16 They remember important dates. If it’s your birthday, they organize the cake and office gift. But don’t rely solely on this sign. It needs to be paired with others on this list as well. There are people who enjoy celebrating a co-worker’s birthday and organizing events.

[Read: How to decode the behavior of your crush]

After taking a look at these signs of flirting at work, what do you think? Is your co-worker flirting with you? A better question, what are you going to do about it?