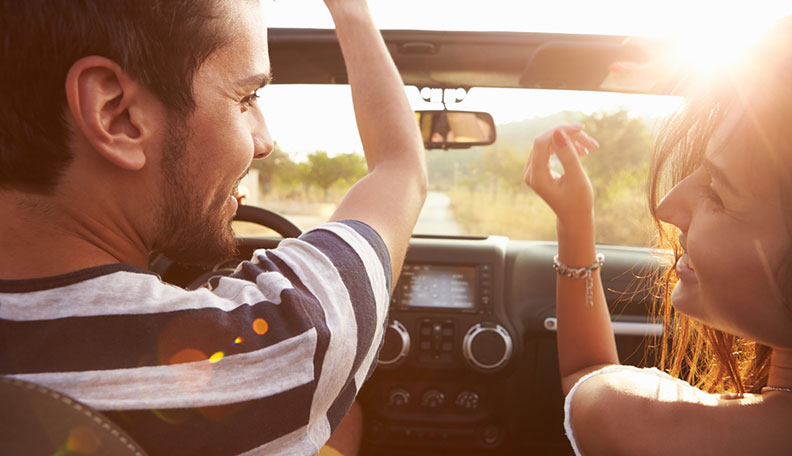 Whether your guy is a talker or more of the strong silent type, it can be hard to get some men to share how they’re feeling. Luckily for those of you with a less than forthcoming fella, there are ways for you to read the signs he’s ready for a relationship or not.

And whether you have been flirting, dating, or on the verge of a serious relationship, it is nice to know where you stand with him.

Are you ready for a relationship?

Before questioning his readiness for a relationship, take a look in the mirror. You may think you’re ready, but are you? Are you still hung up on your ex? Do you have trust issues? Are you prepared to commit? These are all things we avoid looking at in ourselves. When doing so we criticize others.

Looking for the signs he’s ready for a relationship

This doesn’t mean snooping through his phone or making him go out with you and your girlfriends every weekend. Look at how he handles anything rough that comes up.

Look for the signs he is emotionally stable and mature. Does he lash out? Or does he run away when things get tough instead of talking it through? Does he listen and respect you?

See how he treats you when times get tough. Also, look for his behavior when you talk about the future. Does he tense up? Notice these small and sometimes easy to miss behaviors, and the signs he’s ready for a relationship will strike you in no time. [Read: The smitten signs that say your boyfriend is in love with you]

Signs he’s not ready for a relationship

The signs he’s not ready for a relationship may be even more important than the signs that he is. These are the red flags. The signs that tell you to either slow things down or halt them altogether.

If he shows these signs, he may need more time or he could just be someone that isn’t destined to settle down.

#1 He is only interested when you’re busy. The sign of a guy who is not at all ready to be in a healthy and committed relationship. If he is MIA when you reach out, but messages back to back when you are busy with work or friends or just you time, he is all about the chase.

Guys that thrive on the chase are not ready to be in a relationship where both people are respected and talk about their feelings. [Read: What to do when a guy likes you but isn’t ready for a relationship]

#2 He pulls away when things get tough. Every relationship has its ups and downs. How you handle the downs shows how good and often the ups are. If you aren’t even dating and he already pulls away at the first sign of work, he is not ready for a relationship.

If instead of opening up and being there for you, he shuts down when times get tough and things get real, he isn’t prepared to be in a relationship.

#3 He invalidates your feelings. This is the sign of a guy who isn’t ready for a relationship and may never be. I don’t want to say he is incapable of learning, but the type of guy who acts like your feelings don’t matter is not about to change his ways.

There are some guys that simply aren’t mature enough to deal with emotions or your feelings and they can learn from experience. But, the ones that can’t even see that your feelings are important so he doesn’t even try to help or listen is the one you want to run from. [Read: 16 types of guys you shouldn’t bother dating]

#4 He doesn’t ask you anything. A relationship is give and take. You want to know more about this person and you want them to know about you. But, he never asks you anything. Maybe you ask him about his family, his job, and his friends, but he doesn’t even ask you how your day was.

Whether you know a lot about him or not, if he doesn’t try to learn more about you, it’s because he is more concerned with himself than anyone else.

#5 He breaks promises and commitments. This is a big one. A guy that can’t show up on time to a movie or call you when he says he will is not someone that can commit to you are a relationship. The small things are just a glimpse into how he responds to the bigger stuff. [Read: 16 big signs he’s not serious and you’re just his maybe gal]

#6 He’s selfish. This is plain and simple, but we can overlook it. Because we often take on a caregiver role, we offer to help him by driving to see him or canceling our plans for him, but someone that cares about you would care about your other commitments and find your time to be worth something.

A guy showing signs he’s not ready for a relationship will gladly let you do anything and everything for him without offering anything in return, maybe even a thank you. [Read: How to spot selfish people and stop them before they hurt you]

#7 He calls his ex/exes crazy. Unless his ex slashed his tire and threw a brick through his window, he should not be calling any woman crazy. When a man does this, he says he never took the time to listen to her. If she complained that much, there was probably a reason.

When a guy calls his ex crazy it says a lot more about him than it does her.

Signs he’s ready for a relationship

Now that you know what signs you’re hoping he avoids, these are the signs he’s ready for a relationship. If you see a few of these signs, you are in the clear. If you have all of them, you are one lucky lady.

But, again, be sure you find these signs. These aren’t things that you notice every day like him leaving the toilet seat up or not washing his cereal bowl. They are a bit more subtle than that.

#1 He listens to you. Ahhh… a man who listens. Take him and don’t look back. But, for real, if he listens to you, and not with a glazed over look on his face, but actually hears you and interacts, he is mature and prepared for the ups and downs of a relationship. [Read: Manchild alert! Don’t fall for the immature prick]

#2 He involves you in his plans. If he is making plans for next weekend and asks what you’re doing, not only is he mature enough to plan out his time, but he wants you to be involved in his future. Whether that means next month or six months from now, he wants you around.

This goes for watching his show later, but watching yours with you now. Or missing out on the first half of a game to come to your cousin’s baby shower. And a guy that does this without complaint is a saint.

#4 He makes time for you. I do not mean he stays up til 1 am for you to come over. That is not making time. But, a guy who makes time for you in his busy schedule and works with yours wants to make things work.

If he drives a long distance to see you, takes time off from work to spend with you, or plan outings for you, he shows signs he’s ready for a relationship. [Read: 15 signs he’s getting attached and is ready for a real commitment]

And this should not make you nervous. He wants to bring you into his inner circle. It says you are one of the people he is closest too.

Liars tend to lie about everything. People that are honest and ready to be honest in a relationship are always honest.

#7 He’s polite. This is a big sign of emotional maturity. Someone who is emotionally stunted may take their frustrations out on others. That could mean your friends, the waiter, the Uber driver, or even you.

Someone that is in control of their emotions is kind even when having a bad day. [Read: The 13 types of men you shouldn’t date even if you’re looking for true love]

#8 He’s affectionate. Affection and intimacy are a sign that a man wants more than sex. He wants the closeness that comes with a relationship. A man that is not ready for a relationship will try to cut things off after sex or may avoid things like holding hands or cuddling.

Cuddling, hugging, and even sitting close together are signs of intimacy. They strike when you feel comfortable and safe. People that are itching to pull away will likely avoid this.

[Read: The signs he is falling hard and ready to get serious with you]

So, is he showing signs he’s ready for a relationship or not? Are you ready for either answer?

PREVIOUSShould You Meet Your Tinder Match? When, Where & How to Be Safe
NEXTHow to Make Him Want You Sexually: 13 of the Hottest Tricks